Moncler is teaming with Grammy-winning musician Pharrell Williams, who designed a special edition of men’s jackets. 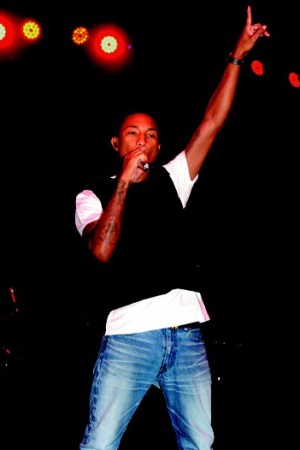 The news confirms a WWD report on Sept. 10.

The all-black lineup will make its debut for fall 2010 and includes a “pacifist” version of the bulletproof jacket, with Velcro-ed side slits, reversible matte/shiny down vests and elongated puffers.

Williams said he was “honored” to join forces with Moncler, noting the project happened on a lark when he met Remo Ruffini, Moncler’s chairman and creative director, at last year’s Miami Art Basel showcase. “I told him I loved his stuff and he offered to do something together, so we started tossing ideas around,” said Williams.

He said he was challenged by rounding out his creative horizons and that whatever his demands when designing the jackets, the “answer was never ‘No, it’s not possible.’”

The noteworthy printed linings meld art and nature with evocative images of lush forests, shot at dusk by Japanese artist Keita Sugiura. Prices and distribution details are still being finalized.

“Pharrell represents a visionary and contemporary eclecticism, as well as a multifaceted way of interpreting creativity from different standpoints, ranging from music to applied arts and clothing,” said Ruffini.

The collaboration with Williams is the latest in a string of such projects for Moncler. The brand recently partnered with Japanese streetwear brand Visvim for a line called Moncler V.