The designer voiced opposition to see-now-buy-now and talked about the perils of working for other brands. 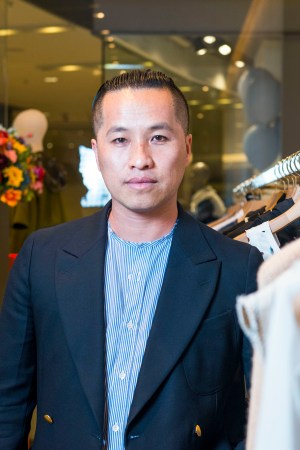 HONG KONG — As the fashion industry’s latest round of designer musical chairs swirls about him, Phillip Lim is busy celebrating the 10-year anniversary of his independently owned brand and enjoying the freedom to grow his business as quickly — or rather as slowly — as he wishes.

“The one thing we’re not good at is people telling us what to do,” Lim said of himself and 3.1 Phillip Lim chief executive officer and business partner Wen Zhou. “Creativity is something that doesn’t only happen in the design process, you know. It’s about business, too, and you have to be creative in how you survive today’s world.”

The designer, who was in Hong Kong as part of an Asian tour, said he prefers to take a measured approach to everything he does and avoid drastic moves. He appears to apply that same philosophy to a number of aspects of his business, from his decision to continue to use fur in his designs — and not drop it a la Giorgio Armani — to his conservative retail expansion strategy. Currently the brand counts 16 stores, with number 17 slated to open in Bal Harbour, Fla., this fall.

Lim and Zhou said they would be open to taking cash from a third investor to accelerate the brand’s development and better position it to compete with bigger labels, but they don’t have any plans to do so anytime soon and want to retain control of the company.

The designer is also taking his time in terms of product extensions — he said he is interested in launching a fragrance but he’s still mulling the possibilities.

“I don’t think extremities ever work,” Lim said during an interview at his three-year-old store in Hong Kong’s International Finance Centre mall, one of the fruits of his brand’s franchise deal with ImagineX.

Lim and Zhou said they are less concerned about posting impressive for sales growth figures — which they declined to reveal — than with directing their company on a steady course.

“It’s interesting how the world of business tries to accelerate everything, as if you would know everything by age 10, if you put that into human terms,” Lim said. “Business people should make business decisions, creative people should bring it.”

Lim went on to express disdain for what he described as fashion companies’ tendency to churn through designers cyclically to generate buzz for brands. It’s a timely topic given the industry’s dizzying merry-go-round ride of recent months that has seen designers coming and going at labels including Dior, Saint Laurent, Balenciaga and Lanvin.

“It’s so obvious to me that that is a sickness of this industry, you know what I mean?” he said.

“From day one you’re expected to come in and have all of the answers….The designer has to get to know the house, feel the house. It’s like you should live in the house for a little bit. You should be given time to really understand all the rooms, the corners, the needs. And I think that instantly it becomes too much of a factory. You know we’ve lost that creative support that actually fuels business, that creates business. Instead, everything is approached as if it’s an instant formula,” he said. “Yes, you will get talk and you will get noise, but for how long? What’s the next thing? The next thing is to close that box to get more noise.”

Lim said the system puts a strain on designers and while he’s never worked for another fashion brand, he identifies with their predicament when it comes to signing contracts and committing themselves to companies. “I think that if I were in that position, I’d be reluctant, too…if the process is really about turn and burn and toast me — you know what I mean — I’d be a fool, right?” he said. “No one wants to be toast.”

The designer said he might consider working for another brand if the right opportunity came along but developing his own business is his main priority for now.

“I’ve never been interested in someone else’s history,” he said. “I want to create my own path.”

For Lim and Zhou that path means careful, studied development of the 3.1 Phillip Lim business rather than a massive rollout of new stores and products. Beyond the aforementioned Bal Harbour store opening, the brand is looking at some potential retail locations in the Middle East. Zhou said it was too early to say more as plans are not yet concrete. Footwear is a another area of strategic focus for growth.

“We don’t have a formula,” said Zhou, who is Lim’s partner with a 50 percent stake in the company. “For us, there’s no extreme ups and downs; it will be a constant, continuous growth. But I’m not expecting to double the business anytime soon. This is not 2006 or 2007,” she added, referring to the global slowdown of the luxury goods business.

“I have to say that we’re really happy with what’s happening. Phillip and I have remained independent and business in Asia is phenomenal,” she said, specifying that Asia accounts for 30 percent of the brand’s turnover.

Lim said he actually welcomes the challenges of doing business against the backdrop of a macroeconomic slowdown, when consumers are more selective and brands need to be craftier in winning them over. He warned that mindless overconsumption — much like grazing at a buffet — is dangerous.

Similarly, he is somewhat critical of the controversial see-now-buy-now strategy some brands are adopting. Echoing recent comments by Victoria Beckham, he said brands need to do a better job thinking about stocking seasonally-appropriate clothing rather than racing to sell swimwear in January. But he was quick to add a caveat.

“You’ve got to think about how this affects the supply chain. Can we say to the cows: ‘hey, get fatter faster.’ Can we say to the trees: ‘grow faster’? You know, it’s impossible. It’s gluttony. Just because you want it now, maybe you shouldn’t have it now.”