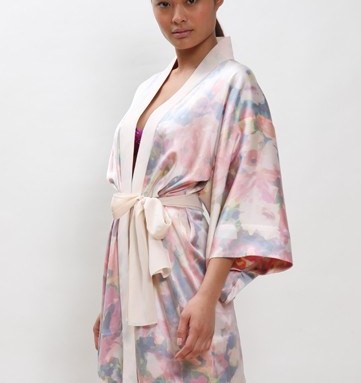 That’s Phillip Lim speaking as he’s holding an impromptu styling session at his 39th Street showroom, darting from one rack to another and grabbing a pair of pants here, a cardigan there. He’s trying to demonstrate a point: His one-year-old intimates line, 3.1 Phillip Lim Initials, will expand into the loungewear category this fall, propelling beyond the bralette-and-boyshorts premise of its debut to seamlessly work that innerwear-outerwear look. The designer throws a sweatshirt over a silk onesie; a cropped kimono, which he calls the “kimini,” gets paired with gold sequin pants from the ready-to-wear racks. “You could wear this out walking around the city or to stay in,” Lim explains. “It’s all about clothing that is versatile and adaptable.”

Initials was launched as a tight five-style lingerie lineup last resort season and has already become a surprise hit for the company. Sales have grown 187 percent to $3 million wholesale in the three seasons since that first collection, which had an 80 percent sell-through, while the new spring offerings in stores are at a 75 percent sell-through thus far. The fall collection has expanded to 34 styles, including harem pants, ruffled swing camis, robes and T-shirts with deep V, beribboned backs. “We’ve also added essential knitwear,” says Lim. “The idea is about a staycation.” Motifs and details of the collection, which sells at 78 retailers worldwide, include watercolor florals (“We reversed the print so it has this fading effect”), mesh inserts and tiny studs in galaxy patterns. Wholesale prices for the line, named after “the initial thing you put on,” range from $32 to $215.

“This opens up a new avenue for us to think about,” says Lim. “What else can you do with underpinnings? How can you reinvent that? Evolve that?” The designer is quick to emphasize his preference for the word “underpinnings” — and not “intimates” — to describe the collection now. “When people think of intimates, it’s unmentionables, things that you hide,” he notes. “For me, this collection is just the literal translation: the pinnings that go underneath. You can wear it in or layer it to go out.”

Unlike Alexander Wang, who recently transformed his T label from a T-shirt line to a lifestyle collection, Lim has no intention of spinning Initials in a similar direction. “It will stay the initial layer,” he says. “It will never be the basic trousers or basic blazer for this price point.” Still, he plans to keep the line fairly separate from his signature 3.1 Phillip Lim rtw. So, while the resort rtw included boudoir touches to call attention to the Initials launch, Lim says that there are no upcoming crossover plans for the two labels. “I marketed the collection into the rtw so people could recognize it,” he says. “Now that they do, I’m splitting it. The lines will have different marketing strategies, different imaging. The only dialogue would be a [shared] print or appliqué.”

The designer also plans to unveil new branding efforts. For one, he plans to upgrade his first SoHo flagship in 2011 to look more like his Los Angeles and Seoul boutiques, designed by Leong Leong Architects, which work a more streamlined and modernist vibe. (Read: concrete, brass elements and spikes protruding from walls.) Even his Garment District offices are getting a facelift. Lim has already redone the foyer walls, which once flaunted lush, painterly florals and are now stark white, and reshaped the doorways to the separate women’s and men’s showrooms. The latter entrance is broader; the former, more narrow and angled into a point. “We’re developing a brand book right now,” Lim adds. “And we’re about to add a face to the [company].”

As for who this new flesh-and-blood mascot is, Lim won’t say, allowing only that she’s not a celebrity. “It’s the natural life cycle of a label that’s evolving into a brand,” says Lim of the changes. “I think a lot of people were unsure about who the Phillip Lim girl was. I’m about to tie everything together.”