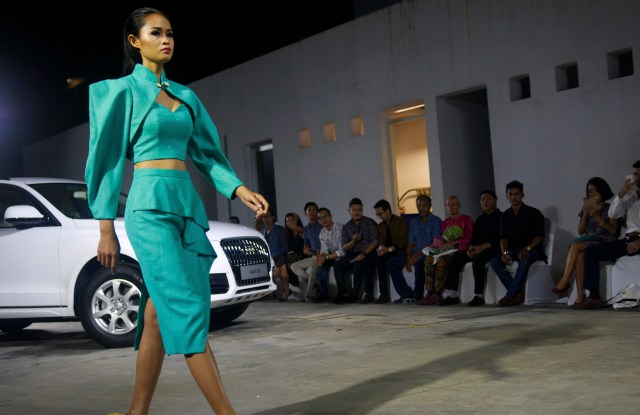 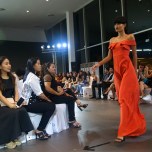 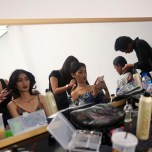 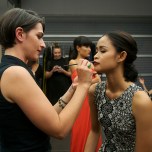 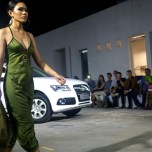 PHNOM PENH, Cambodia — Models dressed in billowing gowns strutted down a parking lot-turned-runway under the headlights of an Audi as the show’s audience watched in rapt attention. Music pulsed through the luxury car dealership’s showroom.

The scene — not out of place in Asia’s more cosmopolitan cities like Singapore or Hong Kong — may appear a dramatic juxtaposition compared with the garment factories located just 30 minutes from the Audi showroom, but Phnom Penh Designers Week revealed that Cambodia can be more than a manufacturing destination.

Ivonn Law, a buyer from Vonqueston, a Singapore-based showroom that focuses on emerging designers, said that she has been coming to various fashion events in Phnom Penh since 2007 to discover new talent.

“We have participated in a few designer weeks so far. We saw a growing pool of talents here, which is why we are coming back very often to catch the shows and see who’s actually producing the good work,” she said, adding that her showroom currently features a men’s wear brand called Remy Hou, as well as two women’s wear labels.

“There’s a lot of craft and innovation — hence, we have been following to unearth some of the hidden talents,” said Law. “It doesn’t matter if it’s women’s wear or men’s wear — we are just interested in Asian talent.”

Despite Law’s optimism, organizers Sophea Ke and Don Protasio — who pulls double duty as a men’s wear designer showing during PPDW — admitted that the market for Cambodia-based designers is still very small. PPDW was actually initiated three years ago because of the need for editorial content for Fashion Lab Magazine, said Ke.

“We didn’t really actually have a [fashion] scene. In order to create content, we had to work with designers at an early stage,” Ke said. “We had this idea that if we wanted content, we had to push for it. We needed a platform to encourage designers.”

Since then there have been a lot of changes in the way that young designers approached the industry, he said. “It used to be focused on tailoring, which is made according to the clients’ demands. But as time has gone by, they wanted to push for their own ideas. So it’s like, ‘This is what I do on the runway, and this is what I do on the side,’” Ke explained.

In terms of economic power, Cambodia is a nation in flux. The World Bank recently revised the country from a low-income status — which puts the gross national income per capita at $1,025 and below — to a lower-middle income bracket. According to the World Bank’s criteria, this means the country now has a gross national income per capita of $1,026 to $4,035.

This emerging middle class is one that is young and unafraid to splurge — and experiment — on trendy purchases. In recent years, many multinational retailers have moved into the country’s once rarely frequented malls, while car dealerships have hoped to capitalize on Cambodians’ evolving taste for luxury.

With all this change, the biggest challenge that young Cambodian designers face is staying true to their vision, said Eric Raisina, who opened his couture house in Siem Reap in 2005.

“The younger generation should focus more on what will be their own identity because their culture is unique and there is a lot to explore in that direction rather than only be inspired by the trends overseas,” Raisina said.

When it comes to clothing, domestic designers find themselves having to clamor for recognition over more sought-after international high street brands — or Cambodian-made clothing in local markets.

Kosal Ou, a former garment factory employee-turned-designer, said he was initially interested in doing women’s wear but had to shift his vision to men’s wear to go where the market is.

Currently, his streetwear brand, Kool as U, is priced around $10 to $40, while his bespoke label — which is usually made-to-order for clients — can range from $50 to $1,000, depending on the pieces.

“The market is very small, so you have to be able to adapt it and understand the customers’ behavior and what they want,” he said.

After working in the garment industry for about 15 years as a sample designer, Ou is realistic about the difficulties of trying to make a mark in Cambodia’s fashion world while trying to stay afloat financially. To get his workshop and business started, Ou had to get loans from friends and family, and is still in debt today.

“I think the Cambodian government should pay more attention to [nurturing the fashion industry],” Ou said, adding that the banks should be more open to providing loans to young business owners without demanding property as a collateral. “The banks don’t really accept anything besides property and most people don’t have that. But we have good ideas and good business plans, yet we don’t have the capacity to get loans. So how can you encourage people to do business?”

Two Wonders — a brand helmed by a Cambodian-New Zealand duo — has run into the same issues in terms of appreciation.

“It’s a very hard industry to break into fashion. I think it’s just because a lot of people don’t really appreciate fashion and the cost that goes into it,” said Sophea Son. “They are so used to having commercial brands here and garments are so easily available.”

But she and her partner, Sophie Knapp, are optimistic as they have observed that the average consumers’ tastes and demands have changed rapidly over the past five years.

“Cambodians are more open with style and they are becoming more open-minded to try something they might not have tried before,” said Knapp. “They are more confident to do so.”

Still, Soknan Nat, whose label Soknan is popular with the wealthy, said that designers need to try and change minds. The average Cambodian still compares a fashion designer to a tailor making a dress for individual clients, said the former agriculture student — whose silk and French lace creations can run from $1,500 to $1,800 a gown.

In addition, any ambition he has to expand his market outside of Cambodia is hindered by the lack of skilled labor. Indeed, Soknan himself had to go to Thailand to study dressmaking and sewing before returning to Phnom Penh to launch his boutique in 2012.

“It’s hard to find good labor; they might be able to sew but it is not good quality,” he said, adding that if given the chance, he would love to participate in Vietnam and Tokyo’s fashion weeks.

“I want to show to the international audience that we are Cambodians and we can do it,” Soknan said. “Mostly they think Cambodians just copy things, but I want to show that we have the ability to design high-quality clothing.”