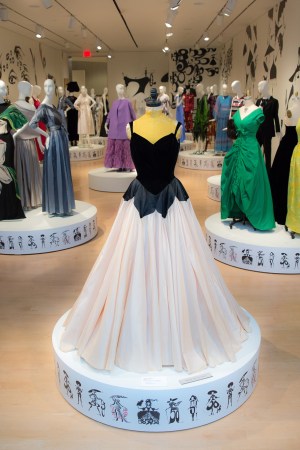 PHOENIX — Phoenix Art Museum’s fashion design department supported by the Arizona Costume Institute turns 50 this year and now it has a reason to celebrate. The museum received a $2 million endowment from board trustee Jacquie Dorrance, who cohosted an anniversary sunset dinner in her Scottsdale airplane hangar on Friday. The gift commemorates the milestone and Dennita Sewell, curator of fashion design since 2000, by permanently funding and renaming her position after its benefactor.

“Fashion has only recently garnered this level of status at museums, especially with blockbuster exhibits like McQueen at the Met, so it’s pretty amazing how visionary the ACI was for 1966,” said Sewell.

Maria Giulia Maramotti, North American retail director for Max Mara, compared Phoenix to Miami. “It’s always been a beautiful place to vacation — I must have gotten 200 likes when I Instagrammed a photo of the mountains from my hotel room — but now it’s coming into its own culturally,” she said of the brand’s first local art initiative. “My mission is to make every New Yorker visit here.”

Max Mara also donated a Whitney bag, which concludes the exhibit, whose 50 ensembles were selected from an archive of 8,000 items for their importance in the confluent histories of fashion and the ACI. A kelly green dress with bows from Christian Dior’s last collection in 1957 was photographed for the designer’s Time cover story. Kitty Carlisle Hart wore the 1954 Madame Grès gown to Truman Capote’s Black and White Ball. A Belle Époque opera coat in violet velvet trimmed in ostrich feathers, a gift from a Newport, R.I., family while cleaning out their “cottage,” provided the nucleus for the fledging fashion department in the late Sixties.

“Everything’s a star in this collection. There’s no junk,” said Halle, whose antique textile gallery has sold several 18th-century costumes to the museum, including the handful in an exhibition vignette. “I’ve probably only seen two dresses with panniers this large since the Eighties. That these survived as crisp as the day they were made is a miracle.”

Among five men’s pieces, a decorative wool livery suit from Ashburnham Place in Sussex had never been displayed at the museum.

Sewell created timeline displays for shoes, fashion magazines and accessories for the exhibit, which runs through Aug. 7. Ruben Toledo’s commissioned illustrations for the walls and pedestals also chronicle the decades, from court life to flappers to Black Power.

Rhodes and Mackie, whose pieces have been exhibited at the museum, are tempted to donate pieces. Sewell’s persistence may secure Mackie’s second retrospective after the Fashion Institute of Technology in 1999. ACI already acquired one of Iris van Herpen’s more prominent digitally printed dresses for the 50th anniversary, which will be displayed when the Dutch designer’s exhibit travels to Phoenix in 2018. It also purchased the 400-piece archive with designers such as Jean Paul Gaultier, Azzedine Alaïa and Issey Miyake from Emphatics, an avant-garde store founded by James and Karin Legato in Pittsburgh, Pa. The acquisition premieres in a fall exhibit.

“I knew it would get lost in a collection as large as the Met’s,” said Karin, who attended the 50th anniversary event. “But more than the right museum, I knew Dennita was the perfect fit when she spotted a Thierry Mugler corset she had worked on while volunteering for Mr. Pearl.”