Piccioli’s way of life is unconventional, especially for a couturier. 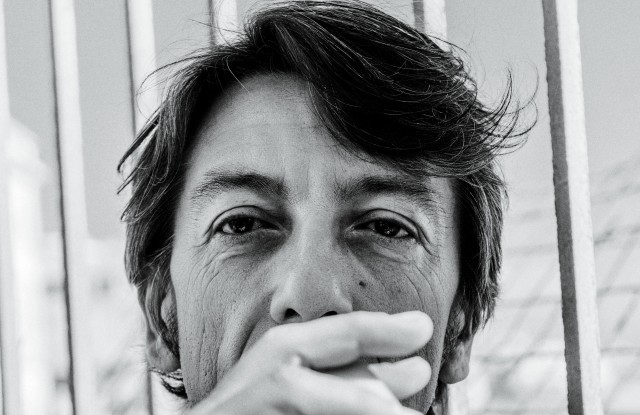 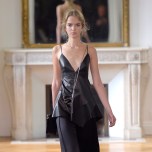 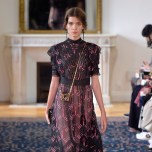 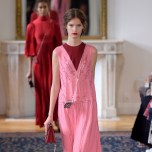 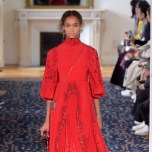 Frank Sinatra put it like this: “I did it my way.”

Pierpaolo Piccioli’s way of life is unconventional, especially for a couturier. And that’s just how he likes it. Valentino’s creative director continues to live in Nettuno, Italy, a beach town 44 miles south of Rome where he was born, where he met his wife, Simona, and where they are raising their three children. Piccioli’s choice seems to mirror his understated and affable manners.

This story first appeared in the November 9, 2016 issue of WWD. Subscribe Today.

When he’s not traveling around the world, Piccioli rides the train to Rome and back each day like thousands of other commuters, and splits his time between the Italian capital, in the storied Piazza Mignanelli headquarters, Paris and Milan. At the moment of this particular interview, Piccioli has carved out a weekend between a trip from New York to Nettuno, back to New York and then off to Moscow, just to spend the All Saints’ Day holiday with his family at home.

While marked by a medieval hamlet and 14th-century towers, there is an additional claim to fame for Nettuno, or Neptune, the god of the sea in Roman mythology: in World War II, the Allies, led by the U.S. Army, landed on its sandy beaches and those of nearby Anzio in 1944, enabling an attack on Rome. Today those beaches are a natural reserve and its port contributes to Nettuno’s tourism. One other American legacy endures here as well — the city has one of the four strongest baseball teams in Italy.

Piccioli took time to explain why he would rather not change his address, discussed his approach to the brand as its sole creative director after the exit of longtime design partner Maria Grazia Chiuri in July, how he felt about his first solo collection shown in October in Paris, and what categories he’d like to approach next.
Your lifestyle is quite unique in the fashion industry. Why do you choose to live in a city so remote from fashion circles?

It’s my life, simply. I believe that both in work and life, the most important thing is the freedom to choose and not adapt to rules, any stereotype that takes away freedom and creativity. I don’t like the idea of the word “lifestyle,” it’s equivalent to being part of a group, it does not relate to one person only. When you download one song and then there are suggestions, if you liked this, you’ll like that. Who says? I like this song, period. I like to choose every time, and the choices don’t have to be consistent with one another. I hate being part of statistics. I’ve always thought that it’s people that make the difference. Being the creative director of Valentino, living in Nettuno, traveling in the world, maybe it’s not the typical choice, but it’s mine, that’s why it has value. I don’t like the word normal because — again — it implies being part of a category.

“When I was young, I dreamed of doing fashion from far away. To have goals and dreams is good for you, rather than having everything accessible right away. Nettuno is big enough. It’s not a big city, it’s small but not [so small] that it’s difficult. It allows our children to go to public schools and that is also a value for us. There is a wide range of people you can meet in life and you can choose who you want to be with, independently of their social class, which is an ugly word. There is no predefined path. With schools of a certain type, your path is marked ahead, and we don’t like it. Freedom to choose is the biggest value you can give your children. With my wife, there was a moment many years ago when we evaluated whether to go to Rome. I never regretted staying here. On the contrary. It allows me to see people for who they are, and they see me for who I am and not for what I do or represent. This is important, too. I am not the creative director of Valentino here. I am Pierpaolo. It’s important not to stay in a role.

Do you think some designers risk losing contact with reality by living in a restricted fashion circle? Can a choice such as yours influence creativity and design?

There is a risk of feeling in a [fish bowl] if you spend time with the same people with the same interests, and you don’t dream anymore. I travel so much and see so many different realities and this allows me to go far away with my imagination — and I dream even more because I know there is a home to return to. If you don’t have a place to return to, you are lost, because you try to stay on one path. At least, this is my experience and it’s true for me. In any case, I think I belong to people, not locations.

That said, what is your life like in Nettuno?

Even in the summer, we go away on vacation, but then we like to come back and stay here, go down to the beach and spend time with our friends and they come to our house. Everything is very familiar and linked to people. The place does not change the perception of your life. People do that. We see friends that we’ve had forever and there are new people, too. This is part of my job. It’s great because you get to know a lot of people, create friendships that interest you beyond work. It’s more personal. Mika [who has performed for Valentino and wears the brand] came to Nettuno, just hanging out with my wife, Simona, my three children Benedetta, Pietro, Stella, my brother with his kids. There’s always at least 15 of us at home. [The same happened for this photo shoot, with Piccioli’s wife and children having lunch with a visitor at their favorite fish restaurant].

“People here are respectful. Sometimes local reporters approach me at the bar for an interview and I have to tell them that there is a press office that manages interviews [laughing], but in the end they respect our private life. Having a wife like Simona helps. She has not changed, we’ve been together many years, she takes the kids to school, she has very deep values that we share. She more than anyone has brought me to be as I am. Obviously, it’s possible to lead a life like mine only if you have someone near who supports you. My children are never alone.

When we met shortly after your appointment as sole creative director, you told me you chose to stay at Valentino.

There have been opportunities, and maybe you like them, but Valentino, I like it the most, I am even more convinced. Besides being a wonderful company, I feel at home, I feel it’s mine. It’s important for one’s aesthetics to fit with the brand. We all knew Valentino for how [Garavani] was, but now it’s the brand’s second generation. This fashion is young in this sense, there is a new perspective. It’s like a postcard, taking a new photo of the same place that people already know. It’s different, but not everything changes.

“I’m interested in people, in creating personal relationships, I know all the seamstresses, their lives, how to speak to each. It’s not the technique that makes the difference in fashion, but the care and passion. Talent is conceptual, but if there is no passion or sharing a project, you lose the poetry. Fashion lives [from] this magic. Things can be beautiful, but they become magic if one puts some of one’s life, care and passion into them. Our work is possible through others. I can dream anything I want, but I need to share these dreams with someone that physically realizes them, someone that understands what I want.

Did you have to re-create a team after Maria Grazia Chiuri’s exit?

I did, and the company is more similar to me now because, before, it reflected two people. I tidied things up near me, and my approach to work has changed. I never worked on my own before, I didn’t know how it would be. Before, there would be an exchange, as we developed concepts. If you work together without compromises, you validate each other’s differences in an ongoing discussion. Alone, it’s more direct, more connected to the sensitivity, the emotions of the imagination, without elaborating.

At the beginning [of designing a collection], I imagine what I want to tell — not the silhouette, but what kind of perception people will have when they see what I propose. It’s the other way around: I start from the feeling that I want people to have. How do I get there, what is the best plot to tell my story in the best way…it’s as in a film.

Alone, it’s easier because of the immediacy of the perception. There is no filter, you know what the beginning and the end will be.

After the show, chief executive officer Stefano Sassi spoke of your freedom in presenting the collection.

I have the possibility to be more direct in an emotional, sensitive way. I put together my mood board, there is a girl from the London youth in the Seventies and an angel by Giotto. In my mind, they looked alike, they had the same innocence. This is personal, less filtered and final. I was free in my work before, too, but we exchanged opinions. I never felt constricted, but we elaborated how two different things could live together. Now, it’s a more personal sensation. Perhaps for the first time, I felt more emotional ahead of the show because I felt more naked. It was more intimate and direct.”

Several designers have felt the pressure of the demands of this industry. How do you organize your work load?

What helps me is that I love to do this job so much, with the same fascination as when I dreamed of doing it as a kid. Every day, I still feel that desire, that pleasure. I try not to forget how I wanted to do this, and I have more than I could ever have imagined.

I don’t feel the pressure. I am enthusiastic and I like to bring my enthusiasm to people, I don’t want work ever to become routine. I need to design, it’s a way to express myself. That said, the collections are many, the work is a lot, it’s very tiring and the days are long. In January, we will have three shows on three Wednesdays in a row. Our pre-collection in New York for the first time, on Jan. 11, and then our men’s and couture shows in Paris.

How do you see the potential of this brand? When you think of Valentino in two, three years, is it something you ask yourself? How do you see it going forward?

I very much like jewels, it’s something I would like to do sooner or later. Perhaps makeup. This brand represents very much the Italian culture of couture. I would like for this great technique, contemporary beauty, individualism and sensitivity tied to Italian coolness to be perceived in every place in the world where you see Valentino.