Pierre Cardin will celebrate 70 years in business with a fashion show for the ages at the Institut de France. 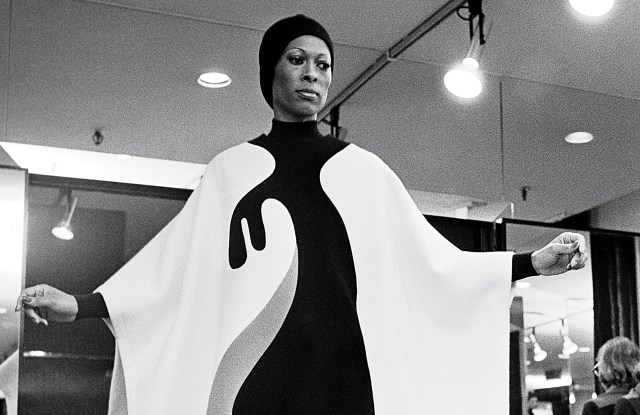 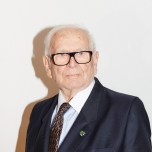 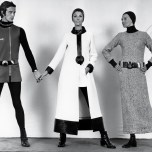 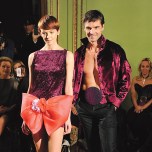 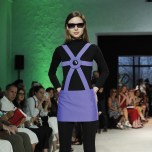 “This is the biggest honor of my career,” Pierre Cardin says about his latest fashion show, scheduled for Nov. 30 at the Institut de France and marking his 70th year in fashion.

While the institute is housed in a beautiful building with a golden cupola on the edge of the river Seine, Cardin is no stranger to even more spectacular venues.

This story first appeared in the November 30, 2016 issue of WWD. Subscribe Today.

He has paraded his Space Age couture on the Great Wall of China, across dunes in the Gobi Desert, through Moscow’s Red Square and — last September — in the Yellow River Stone Forest in northwest China, whose rugged mountains look like they’re from another planet.

You could say the same about many of Cardin’s clothes. Among the dozens of archival dresses slated for the runway is a Barbarella-worthy minidress with fishbowl breast cups and a men’s leather jacket with huge discs jutting from the shoulders.

“Is this not avant-garde?” Cardin asks a reporter as a male model stepped forth in a loden jumpsuit licked with an industrial zipper, and integrated leather briefs, designed more than three decades ago.

Alongside these flashback looks will be about 90 new couture ensembles for both sexes. “Everything is new; the lengths are new!” he enthuses.

Earlier, poking through his office — every surface piled with photos, books and decades of press clippings — he ran across a small postcard depicting a woman in geometric pinafore with straps radiating from a disc at the sternum.

“Maybe in 30 years women will wear these clothes. I hope so anyways,” he sighs.

Why is Cardin, at 94, still so fascinated with futuristic styles?

“Because it’s tomorrow!” he says, flashing a big smile. “Yesterday? No way. I don’t look left; I don’t look right. I look forward, and I pursue my own sensibility. I’ve always been like that — independent.”

While his fashion influence has waned since the Eighties, Cardin still designs up a storm, producing at least 30 sketches a day, many of them dashed up during the night. “When I close my eyes, I see colors, materials, shapes, silhouettes,” he says, grabbing a green marker and fishing on his desk for a clean sheet of paper.

He finds a balance sheet, flips it over and sketches out a gown with orbital protrusions at the shoulders and portholes down the front. In some white space in the corner, he dashes up a sculptural men’s silhouette, with undulating pantlegs. All this takes less than a minute. And then he tears the paper in half.

Asked about his fetish for circular shapes, his eyes flash behind his square glasses. “Because the circle is infinite,” he points out.

It will be the first time the Institut de France, a learned society housing the Académie Francaise that governs the language, plus four other academies, will host a fashion show. Cardin is proud that he was the first couturier to be asked to join the Academy of Fine Arts 25 years ago, and it awards a design prize in his name. This fashion show is his gift to the academy, and its gift to him.

He pulls out the invitation to show the name of the perpetual secretary, painter Arnaud d’Hauterives, inscribed at the top. He looks as proud as a schoolboy holding aloft a report card filled with A-pluses.

The 70-year milestone seems to have put Cardin in a nostalgic mood, as he sifts through a pile of photos stacked haphazardly on the corner of his desk. Even this random sampling telegraphs what a colorful life he’s had.

“Here’s me as a model,” he says, showing a dashing 20-year-old version of himself with high cheekbones and a riveting gaze. Five years later after stints at Paquin and Elsa Schiaparelli, he became the first employee of a promising new couturier named Christian Dior. A yellowed scrapbook on the shelf bears a handwritten note to Cardin from the inventor of the New Look, who ignited Paris fashion with his pinch-waist, fan-skirted silhouette. He reads it aloud in French.

“I did suits and coats,” Cardin beams, summing up what he learned from Dior in one word: “Elegance.”

In 1950, Cardin opened his own company on the Rue Richepanse, initially designing costumes and masks for the theater, which remains a passion to this day. He launched his first women’s collection in 1953 and caused a sensation the next year with his Bubble dress. Soon he was moving in fancy circles.

He shows off pictures of himself next to Lauren Bacall, Fidel Castro, Kasturba Gandhi, Raisa Gorbachev, John Travolta, Claude Pompidou, the Duchess of Windsor and Rudolf Nureyev, among a host of world figures and movie stars. “I dressed everyone,” he says.

“And here’s me when I was in film,” Cardin says, alluding to his brief interlude as a screen actor. He starred opposite Jeanne Moreau, with whom he had an affair, in 1973’s “Joanna Francesca.”

“Oh, and here’s a plane I designed,” he says, running across a black-and-white picture of a striped jet. Besides clothes, Cardin has designed furniture, dolls, car interiors and a yet-to-be-constructed skyscraper, a model of which is displayed in his furniture shop on the Rue du Faubourg Saint-Honoré.

A pioneer in licensing since the Sixties, Cardin had amassed some 840 deals in the early Nineties, generating $125 million in 1992, WWD reported at the time. These have been whittled back to about 350, mainly by eliminating overlapping categories, he says.

Cardin is often sketchy on details, but insists his business is growing, estimating worldwide retail sales of his products at $2 billion. “I just signed a new license last week. I sign them regularly,” he says, while neglecting to give specifics.

He points to a shelf holding a new range of Maxim’s perfumes slated for a spring introduction. A few minutes later, he runs across a picture of Maxim’s water from Vichy, France. “You know I own the source,” he says.

Licensed men’s categories, from suits to pajamas, now account for more than half of his fashion business, and his brand can be found in New Zealand, Turkey, India, Canada — you name it. He’s touched down in many of those countries to promote his otherworldly perspective
on fashion.

“Ties, swimsuits, glasses, luggage, everything. I did everything. You can sleep and eat at Maxim’s and then get dressed in Cardin. I can live in myself.”

No question fashion has brought him wealth, for he owns extensive commercial property in the vicinity of his Rue de Marigny headquarters overlooking the Elysées Palace, not forgetting a building in central Brussels, another in Geneva, his Bubble Palace near Cannes, and the Château du Marquis de Sade near Lacoste, France, where he hosts an annual cultural festival and where he staged a couture show in July.

The day before the interview, he attended a performance of “Dorian Gray” at La Fenice in Venice, a landmark in Italian theater. He produced the play and did the costumes, and it’s meant to travel around Europe.

“It was my dream to go to the moon,” he says, showing off a photo of him wearing Buzz Aldrin’s astronaut suit with its bubble-shaped helmet. “Now I’m too old.”

Not that he plans to retire anytime soon, as there is simply too much to do.

“You know, I work silently. I don’t make noise. I work all the time,” he says with a sly grin. “I have fun with Pierre Cardin; I work for Pierre Cardin.”