Pieter Mulier's appointment at the famed brand is another major designer move at Richemont's fashion operations, which include Chloé.

The fashion division at Compagnie Financière Richemont, long in the shadow of Cartier and the Swiss group’s other watch and jewelry brands, is suddenly brimming with new creative energy.

On Friday, Maison Alaïa said it has recruited Pieter Mulier — the longtime right hand of designer Raf Simons — as its new creative director, nudging the house away from rehashes of its archival designs the past few years.

His appointment came less than two months after Chloé named Gabriela Hearst its new creative director. The buzzy American designer, prized for her sustainability credentials and luxury chic, is expected to show her first Chloé collection in early March during Paris Fashion Week.

And just last month during couture week in Paris, AZ Factory, a venture between Richemont and designer Alber Elbaz, unveiled its first designs and put them for sale online.

Meanwhile, speculations continue to burble in Europe that Richemont could be behind a comeback project for designer Phoebe Philo, who is said to have remained friends with Richemont chairman Johann Rupert since her Chloé days. WWD reported in February 2020 that Philo was recruiting designers for a new fashion project, but she has remained mum on the subject and under the radar.

Richemont’s other fashion and accessories brands include Dunhill — making a comeback at London Fashion Week later this month — along with Peter Millar, Montblanc, Purdey and Serapian, not to mention a slew of high-end watch and jewelry brands.

To be sure, Maison Alaïa will be closely watched in fashion circles, given Mulier’s long experience next to Simons at Jil Sander, Dior and Calvin Klein. Mulier is to present his first Maison Alaïa collection for the spring 2022 season.

The Belgian designer will be based in Paris, and picks up the mantle of a couturier almost universally praised for his exacting methods and dedication to hyper-feminine, figure-flattering silhouettes.

“His appointment marks the opening of an important new chapter for our maison as we jointly seek to carry the foundational values and distinctive style of Alaïa into the future,” said Maison Alaïa chief executive officer Myriam Serrano.

“Pieter stands out with remarkable technical talent and devotion to the craft, a sharp eye for construction and a sense of timeless beauty that is deeply ingrained in the creative approach of our maison,” she added, also lauding his “keen intellect, true generosity and unwavering humanity.”

In a statement, Mulier said it is “an absolute dream” to join Maison Alaïa.

“Always ahead of his time and open to all arts and cultures, Azzedine Alaïa’s powerful vision has served as an inspiration, as he always sought to give the necessary time to innovative and enduring creation,” he said. “It is with this tremendous sense of admiration and responsibility that I will seek to carry forward his legacy of celebrating femininity and placing women at the heart of creation.

“I look forward to meeting the valued Alaïa clients and friends as well as the Alaïa Foundation, and to jointly shaping the future of this legendary maison,” he added.

After studying design and architecture at the Institut Supérieur d’Architecture Saint-Luc de Bruxelles, Mulier started his fashion career working at the Raf Simons men’s label in Antwerp, and expanded his design sphere into women’s wear and accessories alongside Simons when the latter took the creative helm of Jil Sander.

A discreet presence on the fashion scene who posts artworks, groovy buildings and photos of his adorable, digging-crazy dog John John on his Instagram feed, Mulier came to prominence during his Dior days, stealing many scenes in “Dior and I,” a 2014 documentary by Frédéric Tcheng that charted Simons’ emotionally charged first two months as artistic director of the French couture house.

When Simons moved to New York to become chief creative officer of Calvin Klein, Mulier was named creative director and was responsible for executing Simons’ creative and design vision for men’s and women’s ready-to-wear, and the bridge and better apparel lines and accessories. Simons brought out Mulier for his runway bows. Mulier also managed all men’s and women’s design teams within the Calvin Klein brand, under Simons’ leadership.

That impressive and varied resume, plus his background in architecture, won Mulier the plum post at Alaïa, where collections start with 3D shapes rather than flat sketches.

It is understood that Mulier will be devoted exclusively to Maison Alaïa, and he should bring a gust of innovation and fashion newness to the house.

The selection of a new creative leader at Alaïa was a delicate operation, given the towering legacy of the late Tunisian couturier and the fierce loyalty of the staffers he left behind. He died in November 2017 at age 77. 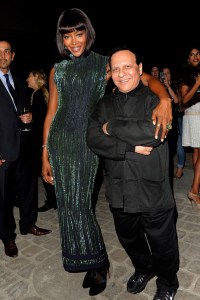 An iconic couturier of the modern era, Alaïa was known for his refusal to bow to industry timetables and marketing pressures, preferring to work at his own pace. He gained international fame in the 1980s because of the success of his evening dresses, snug knits and sculpted leathers, and was nicknamed “The King of Cling” because his clothes fit like a second skin.

Since his passing, the house has reinterpreted designs from his vast archives, and made limited expansion moves, in tune with his rigorous, at-his-own-pace ethos. 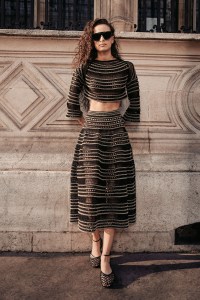 Serrano, who quietly joined Alaïa in 2019 from Chloé, where she had been its director of communications and accessories, last year introduced a wardrobe of Alaïa’s most emblematic designs called The Editions in a gesture to devotees — and in a bid to recruit future ones. The initial 30 looks, spanning from 1981 to 2017, were shown alongside Alaïa’s spring 2021 collection and made their debut at retail in November.

A second batch was presented alongside the fall 2021 collection last month.

Since Alaïa was purchased by Richemont in 2007, the conglomerate invested in staffing, a three-story flagship in an 18th-century mansion in Paris that opened in 2013, and a location on New Bond Street in London that opened in 2018.

Serrano broached the topic of creative renewal in an interview with WWD last year, disclosing that the house has recruited talents in accessories and knitwear. She also allowed that the house was mulling a second step that could involve recruiting an artistic director.