Stefano Pilati Out at YSL, Is Hedi Slimane in Wings?

The fashion house will announce the departure of its creative director today, WWD has learned. 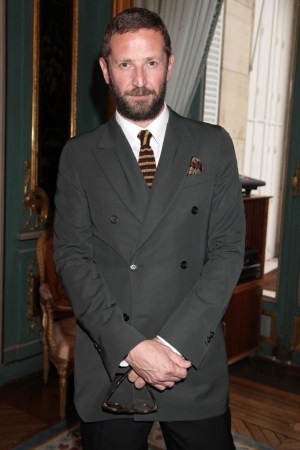 On the eve of Paris Fashion Week, which kicks off Wednesday, YSL will today announce the departure of its creative director Stefano Pilati, WWD has learned.

The development marks the end of a fruitful, if turbulent, tenure for Pilati, who succeeded Tom Ford as YSL’s chief designer in 2004. The fall-winter YSL show on March 5 in Paris will be his swan song.

Sources said men’s wear star Slimane, who pursued a photography career since exiting Dior Homme in 2007, is seen as the frontrunner to succeed Pilati, as reported. It would be a return engagement for the Paris-born designer, 43, who burst on to the fashion scene in the late Nineties with his modernist, androgynous men’s wear for YSL.

YSL and PPR have declined all comment on the future designer leadership at the French house. It is understood the company will remain mum on the subject until after the upcoming YSL show.

“We are all at Yves Saint Laurent grateful to Stefano for his important achievements in advancing the mission and success of this historic and treasured fashion house,” Paul Deneve, chief executive officer at YSL, told WWD.

“I join Paul Deneve and the house of Saint Laurent in thanking Stefano for his dedication and contribution to the story of Yves Saint Laurent. I personally wish him all the best,” added François-Henri Pinault, chairman and ceo of PPR, parent of YSL and other luxury brands including Gucci, Bottega Veneta and Stella McCartney.

Pilati’s exit marks the end of a topsy-turvy, often challenging stint at YSL. While he earned acclaim for some of his collections, with his bulbous-and-belted debut show proving particularly influential, Pilati also took his share of lumps.

His shows were inconsistent — garnering raves one season, barbs the next — and he was at times maligned for making clothes that were lacking in color and modernity.

He was also dogged by replacement rumors throughout his tenure — with Slimane frequently touted as the heir apparent — and endured a frosty reception from the old-guard YSL camp, up to and including the founder. Asked about Pilati’s designs in 2005, Saint Laurent told WWD: “Some of what he does is good. Some of it is not so good.”

Former YSL boss Pierre Bergé made his disapproval plain by attending the fashion shows of other designers, particularly Slimane and Givenchy’s Riccardo Tisci, and trumpeting their talent in the media.

Yet Pilati was instrumental in establishing YSL as a go-to brand for handbags and shoes — sketching out hit styles like the “Muse” and “Downtown” bags and the “Tribute” shoe, a sexy platform sandal that continues to sell briskly five years after its introduction.

In fact, the YSL business demonstrated almost continuous improvement since Pilati arrived — even if well shy of the Gucci-esque rejuvenation miracle Ford once touted.

The company achieved breakeven while under Pilati’s creative watch, a feat reached without opening any new boutiques.

After acquiring YSL in 1999, Gucci Group immediately applied its then-mantra of direct control for production and distribution, terminating more than 150 licenses and establishing a global network of stores in top locations. That radical development strategy drove the company deeply into the red.

Pilati steps out of YSL on a business high note.

Earlier this month in reporting 2011 results, Pinault lauded YSL’s “giant step” forward in terms of profitability, and said growth prospects are “very good.” Full-year sales at YSL advanced 31.4 percent last year to 353.7 million euros, or $493.2 million, while operating income grew more than fourfold to 40.9 million euros, or $57 million. Dollar figures are converted from euros at average exchange rates for the periods in question.

Pilati told WWD he’s “incredibly proud of what I have accomplished with my teams over the past decade at Saint Laurent,” particularly the fashion house’s return to profitability.

“I exit the house with fierce conviction in all that we have achieved and deep gratitude to those who have supported me along the way,” he added. “I wish the maison Yves Saint Laurent and its new creative director the very best for the future.”

Pilati received strong reviews last month for the fall YSL men’s collection, in which he merged details of the leather motorcycle jacket with formal clothing and handsome wool outerwear.

Insiders describe Pilati as a tempestuous talent, but also a hands-on one, who sketched out most designs, selected the leathers used for the handbags, and who played an active role in helping to bring more commercial traction to the YSL business.

He is said to have formed a strong rapport with former YSL ceo Valerie Hermann, an executive renowned for product and merchandising prowess. The duo was able to increase sales density in its existing network, despite a too-dark design concept that was a holdover from the Ford era.

Hermann exited YSL last year to take up the management helm of Reed Krakoff in New York, and was succeeded by Deneve. Sources said Pilati has not meshed as well with Deneve, a reserved and methodical executive who had previously held management posts at Lanvin, Nina Ricci and Courrèges.

Pilati crafted a strong advertising image for YSL, employing iconic models including Kate Moss, Naomi Campbell and Christy Turlington, along with up-and-coming talents such as Arizona Muse. His designs also continue to enjoy a strong profile in magazine editorials.

The Milan-born designer emerged from fashion’s shadows in March 2000, when Ford named him women’s design director for YSL rtw. Before that, he worked in senior design and fabric development positions for a number of Italian design houses, including Miu Miu, Prada and Giorgio Armani.

When Ford exited as Gucci Group’s creative director in 2004, Pilati was seen as a key internal candidate to succeed Ford at either the Gucci or YSL brands. Lee Alexander McQueen, also part of Gucci Group, was courted for the YSL job, but declined it in order to concentrate on his signature fashion house.

Pilati showed his debut collection for YSL in October 2004.

“I hope that women will find easiness and joy and freedom to dress up and look chic in a natural way,” he told WWD at the time. “In the end, Saint Laurent was very easy to wear. It was never contrived. You can wear a little dress and feel very chic and Parisian because of the way you accessorize it or because of its proportions.”

Slimane’s expected comeback to YSL is likely to be greeted with excitement from editors and retailers.

Since exiting as Dior Homme’s creative director in 2007, Slimane has devoted himself to photography and relocated to Los Angeles. But he has often hinted he would return to the fashion fold. The designer was spotted on Sunday in Paris shopping the famous Clignancourt flea market.

Although he has never designed a women’s collection, Slimane has long enjoyed the support of YSL’s old guard, including the likes of Bergé, Catherine Deneuve and Betty Catroux. During his Dior days, he did small quantities of his slim suits in small sizes for such female fans as Nicole Kidman and Linda Evangelista.

Slimane could not immediately be reached for comment. But in an interview last year, he told WWD that he was merely taking a pause from fashion.

“I had enough time to define my style precisely,” he said. “It would have been different if I had left fashion before having defined it. I also never intended to give up on design, but to take a necessary and healthy distance. I do still love design, and somehow have protected my passion for it. I’ll catch up with it in time.”

Slimane had a broad impact on men’s fashion, making skinny suits and tight, low-riding jeans the epitome of cool. Designer Karl Lagerfeld famously shed 60 pounds simply to be able to shimmy into Slimane’s spare, graphic threads, and rock stars from Mick Jagger to Pete Doherty have belted out tunes decked out in Dior Homme.

An art history graduate from the Ecole du Louvre, Slimane was initially hired at YSL as an assistant in fashion marketing and three years later, was promoted to designer, revving up the men’s department with leather trenchcoats, pinch-waisted suits and plunging shirts.

But when Gucci Group acquired YSL in 1999, Slimane balked at a hierarchy that had him reporting to Ford. In spring 2000, he resigned from YSL to pursue talks about a Gucci-backed signature collection. Prada Group also courted Slimane to take over Jil Sander, but he ultimately accepted an offer from Arnault to join in the rejuvenation of Dior.