The Italian designer and Neapolitan suitmaker recently showed their second collection under the MP by Massimo Piombo name at Pitti Uomo. 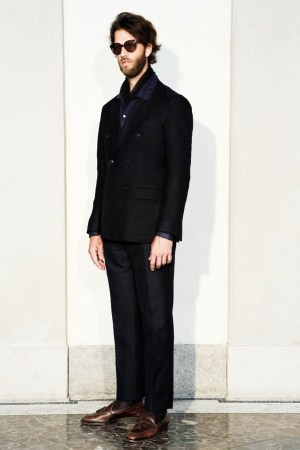 PARIS — Massimo Piombo and Kiton are close to bringing in another partner to help expand their fledgling joint venture, MP by Massimo Piombo.

The Italian designer and Neapolitan suitmaker recently showed their second collection under the MP by Massimo Piombo name at the Pitti Uomo show in Florence.

Piombo, in his first interview since launching the upscale niche men’s label, revealed he and Kiton are in negotiations to bring in a third investor. “One very interesting group will probably come on board,” he said.

The designer’s cult signature label, Piombo, which he created around 20 years ago, has been put on hold following disaccord with investors. “Sometimes in life you close one door and you open a bigger door,” shrugged Piombo. “I decided to launch this project [MP Massimo Piombo] because I think there is a very important opportunity for us to change men’s fashion….Tom Ford with [Ermenegildo Zegna Group] represents American luxury, and we would like to represent beauty — Piombo’s extravagance with Kiton’s sartorial side,” he continued. “My mission is to be the most sophisticated small brand in the world.”

MP Massimo Piombo is positioned around 30 percent higher than Piombo in terms of price points. A jacket starts at around 1,500 euros, or $1,840 at average exchange rates. The collection is manufactured by Kiton, though Piombo has total creative control. The brand’s debut collection, which has just entered stores, was picked up by around 48 doors, including Japan’s Tomorrowland and Trunk Clothiers in London, with an exclusive with Barneys New York for the U.S.

A gifted colorist, Piombo’s aesthetic is rooted in European old-world elegance with touches of quirky bon-vivant eccentricity. When describing his universe, he’ll often reference European jet-set institutions to evoke the spirit of his collections — the Hotel Splendido in Portofino; the Hotel du Cap-Eden-Roc in Cap d’Antibes in the South of France, and Cap Ferret, a chic coastal town in southwest France that is the French equivalent of the Hamptons.

The designer’s studio is based in an outbuilding in the gardens of his family home where he grew up in Varazze, near Genoa in Italy, but he spends most of his time visiting small weavers based mainly in France and Scotland to source traditional cloth. For Piombo, the game lies in working with companies “that are the best at what they do,” be it an old silk-maker from Lyon, “with old ladies working on hand looms;” a linen weaver from Belgium, or “the cheapest cotton in the world” — workwear cotton from Massawa, Africa. “European aristocrats in the 20th century would buy cotton from there, take it to their tailors in London and spend 5,000 euros (about $6,150 at current exchange) having a suit made out of cloth that cost 1 euro ($1.23),” said Piombo, his eyes twinkling. Good fit is also paramount, he said. “It’s about being the best through offering something different, something that, I hope, is intellectual and sophisticated. I see the collection as being seasonless, and women could also wear some of the jackets or scarves,” said Piombo.

The number of doors has grown to around 80 for spring 2013, though the idea is to limit distribution.

As for retail plans, the designer’s dream would be to open one store dedicated to the label. Said Piombo: “For me, beauty is one; when you have double, the beauty is lost.”