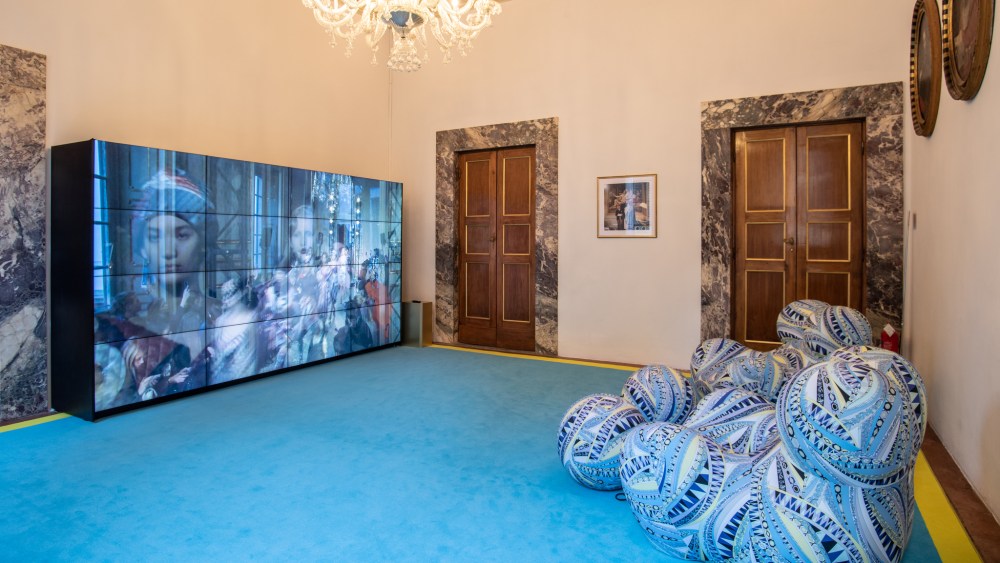 MILAN — Laudomia Pucci knows exactly what she wants Palazzo Pucci to be — and it’s not a museum. The 13th-century building in central Florence will be unveiled after a yearlong remodeling on June 12 during Pitti Uomo and billed as the Emilio Pucci Heritage Hub.

“There are 69 museums in Florence, there is no need for 70,” said the brand’s image director in an interview at Pucci’s headquarters here. “I toyed with the idea of a museum, but then I felt we should translate all the richness of the Palazzo and our history into something that will be attractive, drawing young people in,” said Pucci, the daughter of founder Emilio Pucci.

This is a project particularly dear to Pucci, whose family started erecting the building in the 1400s. Two years ago, the brand’s parent company LVMH Moët Hennessy Louis Vuitton, decided to transfer Emilio Pucci employees to Milan from the palazzo in Florence to create greater efficiency and operational synergy, combining creative and commercial roles in Milan. With the support of LVMH, Laudomia Pucci considered different options for the storied building, which is still owned by the Pucci family.

“Florence has the greatest concentration of arts and culture in the world, but it lacks a place for young professionals to prosper and grow. Our aim was to reconnect with the roots of the brand by addressing our history in a contemporary manner by creating an archive of the future,” Pucci explained.

To this end, for the past year she has worked on putting together the Heritage team, young professionals scouted from partnerships with Central Saint Martins and Polimoda, to turn Palazzo Pucci into a center that chronicles and catalogues the story of the brand and Made in Italy production. “It’s so much fun,” Pucci said with a big smile. “These young creative minds have a fresh perspective on our history and believe anything is possible. Young kids never say no; it’s all about pure creativity and pushing the boundaries.”

To wit, the remodeling of the building with architect Piero Lissoni, whose clean and minimal vision offsets the playful and joyful essence of the brand, includes sky blue or fuchsia carpeting, trimmed in mint green, placed on the antique floors and steps. The colors are all from Emilio’s own original numbered and trademarked hues.

“It’s beautiful to see how a brand that is more than 70 years old can be re-elaborated and find a new dimension,” Pucci said. Her father’s studio, down to his desk, his agenda, his perfume and other personal memorabilia, stands in another room, as does a new version of the boutique that housed all the collections starting in the Fifties at the palazzo.

Pucci has asked the city for permits to open a gift and coffee shop. “It would make sense to open the palazzo to the public and have something special for special moments,” she said. “This kind of location is missing in Florence, and it’s an investment that Pucci and LVMH are making that we think is important for the brand and for the city.”

Pucci’s special home collection pieces made with Cappellini, Kartell and Bisazza —which can all be ordered — pepper the spaces in the building, including two standout, cocooning armchairs by B&B Italia placed in front of a floor-to-ceiling video display in collaboration with Samsung. One of Emilio’s most famous prints, the Vivara, inspired by the island of Ischia, has been given a dedicated space within the palazzo with a wallpaper installation.

The first day of Pitti Uomo, Palazzo Pucci will officially open its doors again with the installation “Bonaveri, a Fan of Pucci,” a partnership with the Milan-based mannequin producer Bonaveri, which will run until June 15. “All the codes and elements of the brand are there, presented in a playful and ironic way,” Pucci said. “It’s unexpected and it may seem strange, but when you look at it, you understand my father’s inspiration.”

For example, an archival straw hat becomes a straw mannequin, and Pucci’s famous “pearl bikini” is translated into a mannequin nestled in an oyster shell. A mannequin wearing an outfit from the Seventies will be sitting on a carriage in the courtyard between lemon plants and a 20-foot-high mannequin in colorful Pucci prints. A backstage area is designed to show multiracial mannequins — another reference to the founder of the company — wearing the fall collection. The project includes around 215 mannequins, including miniature-sized ones that will be painted by artists.

Sunglasses, bags and other accessories placed on the statues in the frescoed building add an irreverent touch to the stately structure.

“There will be historical photos to show the reasons behind these choices,” explained Pucci, who underscored how the carpeting, the mannequins and the lighting with Zumtobel are all sustainable.

In jest, Pucci said that growing up in the Pucci world, she felt like “Obélix fallen into the magic potion,” and that it was “difficult to be objective,” but that she could still see the fil rouge of the label in this set up. “There are no white tables or gray walls, everything speaks of the brand here. On the one side there is heritage, on the other there is innovation, also through Lissoni’s super modern, pure and minimalist indications that were right for the brand. This is yet another significant change for the palazzo, after years of being first my father’s laboratory, then our headquarters. We want this to be immediately perceived through the colors, but we don’t want for this heritage to be an imposition, which it can sometimes be. There’s a reason for what you see, it’s not just a splattering of color for the sake of it,” Pucci said.

Established in 1947, Emilio Pucci is one of Italy’s storied jet-set brands of the Sixties, synonymous with dazzling prints on silk jersey, which the founder even applied to skiwear early in his career, pioneering a lifestyle approach to fashion.

Pucci underscored how the brand has a “soul” in Florence, the same city where fashion was born in Italy.

She said the Heritage team can work with the design team, with museums and publications “in a moment when storytelling is important, and there’s a lot of everything, but this is very Pucci-specific. The brand is speaking up with a direct and loud, yet sophisticated message,” said Pucci, who wants to avoid any pretension in favor of irony. “If you are curious and want to understand more about the history of the brand, you can, but if you are not interested or in a rush, it’s so visual that you can just leave with a head full of colors.”