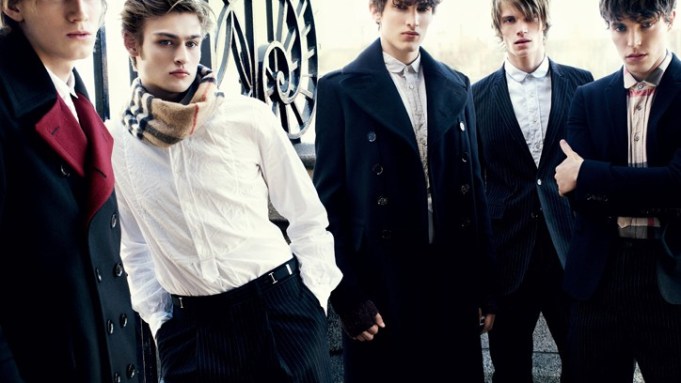 MILAN — Although leading European manufacturers are steering clear of heralding the appearance of green shoots in the men’s wear market, many see seeds of hope for a relative pickup toward the end of the year.

“Things are beginning to stop getting worse and there is the hope that, come the fall, they will appear at least to improve, if only because we will be comparing ourselves with the drops in the last quarter of 2008,” said John Hooks, deputy managing director at Giorgio Armani.

Despite the optimism the market may be close to bottoming out, executives anticipate cautious orders from retailers for spring-summer 2010. None expect business to return to the levels of yesteryear any time soon, underlined by an unwillingness to make concrete projections. Major retailers will be in Europe beginning next week for Pitti Uomo in Florence, followed by the men’s runway shows in Milan and Paris.

“I don’t think there will be a sudden turnaround. I think business will be difficult for many for a long time and a period of readjustment will happen,” said Sir Paul Smith.

This is particularly true for men’s wear. As Christian Dior president and chief executive officer Sidney Toledano summed it up: “Men put on the brakes for longer and take longer to step back on the accelerator.”

When the recession does abate, executives said they expect the Middle East and Asia, particularly China, where men’s wear is still growing, to lead the way. In the meantime, they are continuing to focus their efforts on design, quality and service while protecting margins.

“Now more than ever, clients are informed, careful and critical regarding the item they buy,” said Dolce & Gabbana group managing director and board member Cristiana Ruella. “Our response to this behavior [is] the utmost attention to detail in every phase, from the creative process to production to distribution, and by bringing to life the complete brand experience in our stores and offering the best service that our clients deserve.”

In men’s wear, executives said this means demonstrating a brand’s legitimacy in the marketplace and offering value for money. In some cases, this translates to changes in design or materials, and in other cases, focusing more on opening price points.

“Men tend to buy from a limited number of brands anyway but in tough times, they are even more focused on shopping from those they consider to be the top brands,” Ferragamo chief executive officer Michele Norsa said.

“Men want codes,” Toledano said, citing the importance of “the integrity of the brand and the product. If you win [men’s] trust, they are much more faithful.”

In practice, executives said this amounted to brands balancing what they are known for with the demands of the market.

“This is the time to concentrate the offer rather than dilute it,” Ruella said.

Givenchy ceo Fabrizio Malverdi said the label had completely reworked its collections of men’s bags and small leather goods in terms of product offering and design in order to stimulate spending.

“Our tactics are focused on having a balanced construction of the collection both in terms of offer and prices, increasing the upper casual/casual part that we think [is] an area of growth we [have] underestimated for a long time,” Malverdi said.

“Last year, men’s wear continued its transition from legacy product licences, strengthened its tailoring offering and enhanced dedicated marketing. We are uniquely positioned with our British heritage and our iconic branding platforms and with the diversity and breadth across our product pyramid. We also have an unrivaled outerwear business, where Christopher Bailey continues to add innovation on the runway, as well as launch new outerwear initiatives such as Burberry Sport to keep the vibrancy,” Ahrendts said, adding for spring 2010, Burberry is best positioned to “capitalize on opportunities, which will deliver sustainable long-term growth.

Brioni co-ceo Andrea Perrone said: “Our spring-summer collection is also based on the new needs of the market, new products and materials are offered at a different price without compromising our exclusivity and quality.”

“I think it’s important to be a little more accessible, while still keeping the prices of the core business and the top products in the same range,” Norsa said.

Toledano cautioned, though, that lowering prices was an “error.”

“On the contrary, you have to keep quality standards because customers who can’t [afford our product] today, will be able to tomorrow,” he said. “And you have to manage sales and markdowns to your best abilities. It depreciates the value of the brand. Even if people buy markdowns today, when the situation improves tomorrow, they will want new products.”

Isaia ceo Giovanni Mannucci added: “If you need to adjust to current market conditions, it means you did not have a strategy in the first place. You prepare for times like this all the time and if you are not prepared, it might be too late.”

“This is to put the customer at ease,” Corneliani said. “To this we also factor in the service provided by our sales assistants, who retain a central role in [Corneliani’s] retail strategy. They are consultants rather than salespeople.”

On the heels of Harvey Nichols announcing last month that it plans to launch men’s and women’s labels under the store’s brand at some point in the future, Bain & Co. partner Claudia D’Arpizio said department stores could take advantage of their superior customer relationships to offer private labels, particularly to men.

“Men are an easier target for private labels,” D’Arpizio said. “Particularly if you succeed in delivering a balanced price-value ratio in specific categories that men consider more of a commodity, such as formalwear or shirts, rather than items with a high-fashion content.”

While some brands have reined in plans for retail expansion, many have pushed on in 2009, looking to strengthen their networks and get closer to the consumer in anticipation of an eventual turnaround in business.

“Actual market conditions offer opportunities that were prohibitive in the past,” Isaia’s Mannucci said.

“We continue to invest because we believe that during the economic revival, they will give benefits and advantages,” Kiton ceo Antonio De Matteis said. After store openings in Rome, Saint Petersburg and a shop-in-shop in Saks Fifth Avenue this year, Kiton plans two more openings before yearend, in Dubai and Istanbul.

“The crisis hasn’t stopped the desire to win market share and new markets,” Toledano said. “We believe in this category.”

Giorgio Armani has been conspicuous in this respect. Following a record year in terms of retail expansion in 2008, the company is continuing its ambitious store-opening program this year, which will include Giorgio Armani flagships in New York, Tokyo and Singapore and Emporio Armani units in Berlin, Singapore and Doha, Quatar.

“But I think we need to take stock before committing the same amount for 2010,” Hooks said.

“[Our policy is to] always strengthen the main drivers of growth but obviously [now], we’re paying greater attention to assessing each project and reducing further the margin of risk relative to what was tolerable in the past,” she said, adding Dolce & Gabbana had opened 10 new stores under the Dolce & Gabbana and D&G brands, both in Europe and emerging markets, so far this year, including dedicated men’s and women’s units respectively in Manama, Bahrain. The company plans four more D&G sales points by yearend.

D’Arpizio said: “In the long run, we will see a sharper segmentation between the shopping experiences and the ceremony dedicated to men and women.”

However, executives were split on this.

Dior has 35 freestanding men’s stores and Toledano said: “Every time we can open a men’s and women’s boutique side by side, where they’re connected, we do.”

Dior will open another men’s and women’s store this fall in Singapore.

Malverdi said Givenchy’s retail strategy was to have men’s and women’s wear in the same store “but in separate ‘boxes.’”

“I believe it’s a great opportunity and where we have men’s-only stores, I think they perform better,” Norsa said.

“Our retail strategy is to put men’s and women’s together in all store formats. This format is more productive for us and we do not have any plans to launch men’s-only stores,” Ahrendts said.

“Only in department stores do we recognize the necessity of separate spaces according to the logic of different floors,” Hooks said.

“Most of our shops are men’s and women’s because we design collections which work well together,” said Paul Smith.

Brioni’s Perrone said: “The choice for single-sex stores or same-sex stores depends on the location in terms of space, market and commercial strategy.”

Ruella explained that for Dolce & Gabbana, the decision to have single-sex stores depended on the maturity of the market and the level of penetration in key locations.

“The separation of boutiques for men’s and women’s wear in the main locations allows the best exposition and visibility of all the categories present in our collections,” she said. Dolce & Gabbana has single-sex stores in Milan, Paris, London, New York, Los Angeles, Istanbul and Manama.

In terms of product categories, some executives identified upper-casual and shoes as providing the most opportunity for growth.

“[Upper-casual] definitely has more potential than [tailored],” Ferragamo’s Norsa said. “This is a big business with a huge market for countries where people don’t wear a jacket. Shirts and polo shirt are a huge opportunity.”

“Our business generally has been quite good because of the huge increase in our shoe business for men and women,” Paul Smith said, highlighting particular success in the U.K. and France.

Toledano said the same was true at Dior.

“Shoes are a category that has very strong growth recently,” he said, citing all shoe types. He added shirts, denim, eyewear and Dior’s Chiffres Rouge Diver watch were also “performing well.” Dior Homme accounts for 12 percent of group sales, which according to Toledano, is a “growing category” and one with “great potential.”

Executives also highlighted the growing importance of e-commerce, particularly for men, who are more prone to purchasing online. Paul Smith, for example, noted his label’s overall Web sales were up 70 percent over last year.

“Women use the Internet as a sort of fashion editor,” D’Arpizio said. “Men are using the Internet more as a real channel for online shopping.”