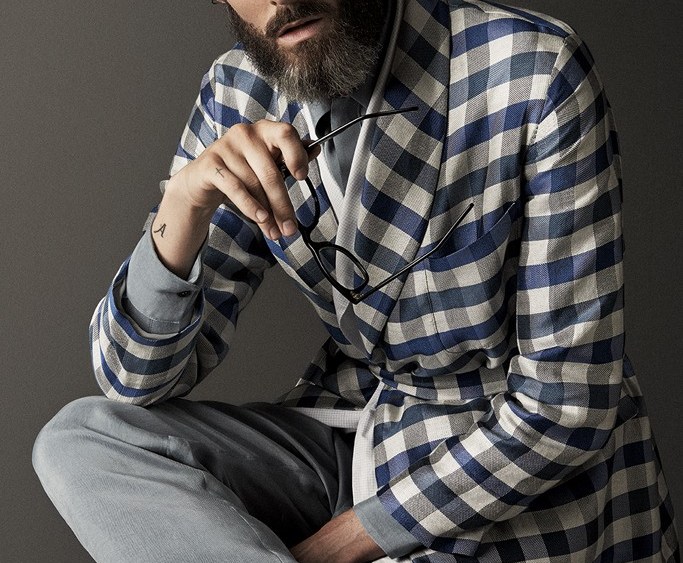 In keeping with a business strategy focused on rebuilding a solid, luxury image for the La Perla brand, the company has chosen to relaunch its men’s wear division at Pitti Uomo. On Thursday, the brand, which after years of financial troubles was acquired by Pacific Global Management last June, will unveil its new collection with a runway show at the Dogana venue at 5 p.m.

“We wanted to make a statement on the importance of the collection. We want to start strong and demonstrate commitment,” said La Perla North America chief executive officer Suzy Biszantz, who also pointed out that “this collection is very fashion- and design-driven.”

Positioned in the high-end segment of the market, the collection will include underwear, beachwear and loungewear, “which can also be worn in the evening to go out,” said La Perla’s recently appointed creative director Emiliano Rinaldi.

“The collection was born in a very natural and instinctive way, the company’s executives didn’t impose anything on me,” said Rinaldi, explaining that, as soon as he joined the label, he found himself knee-deep in the company’s archives. “I got inspired by La Perla’s spirit, tradition and luxurious allure. My goal is to bring back and revisit the company’s signature elements, imbuing the men’s line also with a sensual vibe.”

In order to reach his goal, Rinaldi played with transparencies, layering and precious details. Key pieces include a silk robe worn over a see-through vest, a kimono-inspired raffia robe, along with high-waisted underpants that, when worn under trousers, look like a cummerbund. Rinaldi also worked soft, lightweight cashmere for T-shirts, sweaters and hooded tracksuits with a streetwear feel. A “mystic print” of pearls is reminiscent of eyes with wings and appears on a range of pieces, such as a fluid silk pajama and swim shorts.

In the U.S., La Perla men’s line is currently sold exclusively in the company’s flagships. “It’s totally new for the U.S.,” noted Biszantz. “We are launching this collection on a white canvas.”

According to Biszantz, over the next few months, La Perla will redesign some of its stores, including the boutique on New York’s Madison Avenue, dedicating specific areas to the men’s offering. “We also aim to sell the collection to various high-end, selected boutiques in the U.S., Canada and in luxury resorts in the Caribbean, as well as online,” Biszantz explained. —Alessandra Turra

Today at Florence’s Giardini Corsini, Luxottica will unveil “Faces by The Sartorialist,” an online platform collecting images paying homage to the world of optical frames. In particular, Schuman, during his trips around cities including Milan, Rio de Janeiro, Shanghai and Paris, captured people wearing Luxottica optical frames. A link will connect each shot with the Web site of the eyewear brand featured in the picture.

“Eyeglasses are fascinating objects, they can both bare a person or transform him,” said Schuman. “From my experience, nowadays people experiment more with eyeglasses, which are considered trendy accessories. It was exciting to catch the real essence of Luxottica frames.”

Those attending the launch event in Florence will be the first to interact with the Web site and will have the chance to take pictures wearing a number of Luxottica styles. In addition, after the launch, “Faces by The Sartorialist” will be continually updated with various contributions from a series of creative people operating in different areas around the globe. — A.T.

NEXT: County of Milan >>

“I’m not a designer, I’ll never be — I’m the emblem of a new idea of creative director,” said Marcelo Burlon.

Born in Argentina’s Patagonia region in a family with Italian and Lebanese origins, Burlon can be considered the king of Milanese, if not European, nightlife.

The mind behind the unforgettable parties that animated the Magazzini Generali club in Milan in the late Nineties — Dries Van Noten, David LaChapelle and Domenico Dolce were easy to spot on the dance floor — Burlon later started organizing events for a number of fashion companies, including Giorgio Armani and Prada, establishing the Marcelo Burlon Entertainment company.

When social networking kicked in, Burlon said he understood it was time for him “to monetize my experience and express my roots and aesthetic.”

In 2012, Burlon launched his County of Milan label, unveiling a line of unisex T-shirts decorated with eye-catching prints mixing the esoteric symbols of Patagonia’s Tehuelche native tribe — blending snakes, birds and the Patagonian puma, among others, with rave cultural elements. Buoyed by the success of the T-shirts, Burlon then created a men’s division that same year. Starting with the spring 2013 season, he introduced additional pieces, such as Windbreakers, ponchos and shorts, and in winter 2014, launched the first County of Milan total-look collection, including shoes decorated with graphic patterns.

“County of Milan is the result of what I’ve experienced in 15 years working as a DJ, event producer and stylist,” said Burlon, who, in keeping with his roots, is organizing a major event to mark the debut of his fashion label at Pitti Uomo.

County of Milan will today throw a party with a live performance at Florence’s Parterre venue, which will be transformed into a sort of motocross racetrack.

“My father was a race director in Argentina and the motocross’ aesthetic has been part of my life since I was a child,” said Burlon. Graphic patterns for the spring collection decorate a range of garments, including outerwear pieces, along with T-shirts and sweatshirts with sophisticated dégradé effects or tridimensional tone-on-tone symbols. Denim pants come in black or white washes, while leather jogger pants and jackets are offered in an allover snake print. The collection also includes beachwear and a range of accessories, including printed helmets, socks and beach towels.

County of Milan is sold in 420 stores worldwide, with retail prices ranging from 150 euros, or $204 at current exchange, for a T-shirt to 1,500 euros, or $2,036, for a winter leather jacket. “We focused only on high-end stores,” said Burlon, citing Barneys New York, Webster, Atrium and Printemps, among others. Since its launch, the label has also been linked to a number of celebrities, including Luis Hamilton, Victor Cruz, Drake, 50 Cent, Rita Ora and Pusha T — for the latter’s tour, Burlon created customized T-shirts sold outside the rapper’s concerts. — A.T.

Will finance style ever be synonymous with chic? Present that very quandary to Samuel Bail of the leather goods line Troubadour and he will say yes.

That’s because Bail — along with partner, Abel Samet — has created Troubadour, a line of leather goods targeted at the corporate male who is in need of that elevated work bag. Bail, who worked in a mergers and acquisitions advisory role at Lazard, said the impetus to start the brand was the mere fact that neither he nor Samet was able to find that perfect professional accessory.

“We wanted to find one that we could take to an office and we’d be comfortable with that didn’t have those Gucci or Louis Vuitton logos,” he said. “Nothing too structured either.”

So two-and-a-half years ago, both embarked on a journey to Italy in hopes of locating a few bags they could bring back home. Along the way, Bail and Samet came across Italian tanneries, leather goods suppliers and a few accessories experts who helped them source the finest materials. What ensued was a newfound passion for the process of leather-making. Both quit their jobs to jump-start the company and work on it full time.

Today, the London-based line, now in its second year, offers an array of luxurious leather accessories that are designed with a clean, minimalist approach. The brand offers a weekender bag at 1,275 pounds, or $2,165 at current exchange; a rucksack at 1,225 pounds, or $2,080, and a briefcase at 975 pounds, or $1,656, among others. Each comes with luxe finishing touches including a cotton canvas lining and rivet-reinforced straps. All materials are sourced in Italy from a small town called Sante Croche between Florence and Pisa, and fully tanned in barrels filled with vegetable dyes. Colors include black, navy and brown.

For spring, the line extends to small leather goods including slim billfold wallets and a business card holder. As the collection has expanded, the company has employed a handful of designers and recently tapped Brianna Smith, who hails from Mulberry.

Troubadour is now sold at Harrods, Harvey Nichols and Assembly New York, among others.

“A troubadour — by tradition — is a traveling storyteller from the Middle Ages who traveled around sharing ideas,” said Bail. “So a big part of us sharing a lot of stories is through our bags.” — David Yi

In Italy, the equivalent of the infamous dunce cap is the so-called orecchie d’asino, or “donkey’s ears” in English, with two paper cones replicating the ears of a donkey, the animal traditionally associated with the image of stupidity. Even so, Diego Marquez and Mirko Fontana, the creative minds behind the Italian Au Jour Le Jour Garçon label, chose the donkey as the emblem of their first runway show, to be held on Thursday at noon at the Dogana.

“The mood will be back-to-school. We decided to take on this childhood theme because it’s something marking the life of everybody,” said Marquez. “The atmosphere will be young and fun, but we will show a supersophisticated collection inspired by the Italian tailoring tradition.”

In particular, Marquez and Fontana will present a “new idea of suit,” where classic elements will be softened with younger silhouettes and bright colors, which “will remind the objects we used to put under our school desks,” Marquez said.

Rich fabrics will take center stage in the lineup. These will include high-end light wool and double cotton, sometimes in micro patterns with a precious effect. The collection will also show many knitted cotton jacquard pieces, along with shirts, jackets and shorts printed with school-inspired images. “There will be also a streetlike section, made luxurious through embroideries,” said Marquez.

Au Jour Le Jour Garçon, which Marquez and Fontana launched last year after the debut of the Au Jour Le Jour women’s line in 2010, is mainly sold in Asia, where its collections are available at a number of stores, including Harvey Nichols in Hong Kong, Galeries Lafayette in Beijing and Beaker in South Korea. — A.T.