When Janice Levin-Krok learned Poleci's flagship on West 14th Street would have to relocate because the landlord wanted to redevelop the building, the... 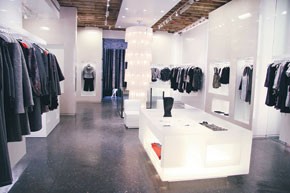 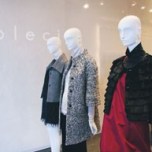 NEW YORK — When Janice Levin-Krok learned Poleci’s flagship on West 14th Street would have to relocate because the landlord wanted to redevelop the building, the creative director of the Los Angeles-based contemporary brand saw it as an opportunity to redefine its retail image and develop a new store prototype.

Poleci’s 5,000-square-foot flagship at 32 Gansevoort Street in the Meatpacking District, which opened earlier this month, shows the results of Levin-Krok’s new ideas. It’s expected to do more than $2 million in sales in its first year.

The new store is the antithesis of the original. Where the West 14th Street unit was dark and moody, the new location is all about light and how it plays off of different surfaces. It matches the company’s sunnier approach to expansion. A few years ago, Diane Levin, Poleci’s managing director, chief executive officer and Levin-Krok’s sister, would have shrugged her shoulders and muttered something about organic growth. Now she has a plan firmly in place, which includes relocating Poleci’s Los Angeles flagship to a space large enough to accommodate the store and showroom, and unveiling in February a 2,000-square-foot unit at the Palazzo in Las Vegas. The store, which is directly across from Barneys New York, will have more than 50 feet of frontage. The brand wholesales to about 1,000 doors worldwide.

“We’re being more aggressive,” Levin said. “We have a long-term plan. We’ll open eight to 10 stores in the next few years, including international expansion. We’re about to relocate our Melrose Avenue store in Los Angeles because we need a bigger space to elevate the brand.”

Asked whether Poleci is looking for investors, Levin said: “We always talk to people, but we aren’t looking. Our growth and plan is structured. We will do a runway show. Next year [Poleci] will be more heavily marketed.”

Another key to growth is adding product categories. Levin-Krok, who designs lingerie underpinnings, said Poleci will launch handbags and small leather goods in the fall as well as home furnishings such as cushions and blankets. A shoe collection will bow in the spring, followed by fragrance.

“Our collections range from T-shirts into fur coats,” said Levin-Krok. Pieces have an architectural bent with an emphasis on innovative fabrics. An allover sequin slipdress is $1,065; a sheared white rabbit-fur jacket, $924; a houndstooth coat with a Peter Pan collar, $655, and a black tank dress with feathers and delicate beading, $655. The core of the collection is the jersey pieces, tops with dolman sleeves and keyhole backs.

The Gansevoort Street store uses innovative materials with light-enhancing qualities. A wall in the entry is made of Scintilla, a material that interacts with light to produce a rippling effect. Throughout the store, niches are covered in white Thassos stone, which has the bright crystalline color of refined sugar. There’s a dramatic two-story, 20-foot-long chandelier that hangs through a hole cut out of the first floor to the lower level, where Poleci’s showroom is located.

“The brand was evolving,” said Levin. “We wanted to evolve the look of the store in terms of sophistication and comfort.”