Prosecutor’s office has organized a Monday meeting in wake of the altercation. 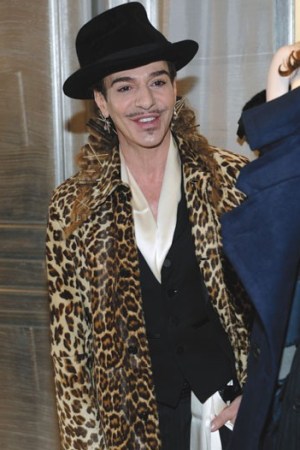 MILAN — The public prosecutor’s office in Paris has ordered a meeting today between John Galliano and Géraldine Bloch, the woman at whom the designer is alleged to have hurled anti-Semitic and other insults during a drunken altercation at a cafe.

The incident that has gripped the fashion world for the last three days led to Galliano being suspended from his duties at Christian Dior on the eve of Paris Fashion Week and another crucial event, Sunday night’s Academy Awards, where Dior ambassador and best actress nominee Natalie Portman donned a violet Rodarte dress rather than a Galliano creation for her stroll down the red carpet. However, Sharon Stone wore a Dior gown but skipped all press interviews on the red carpet.

A defiant Galliano is fighting back to salvage his reputation and his job, claiming through his lawyer and via witness statements that he never uttered racist or anti-Semitic slurs.

Still the benching of the fashion star brings his glorious career — and Dior’s strong business trajectory — to a delicate juncture, immediately calling into question the fate of the house’s fall fashion show, scheduled for Friday, and Galliano’s signature show on Sunday.

Signaling that powerful global brands today are more important than the star designers behind them, Dior management intends to go ahead with both events — barring any unforeseen flare-up in the saga, a giant tent hasalready been erected in the garden of Paris’ picturesque Rodin Museum for the Dior fashion spectacle. Dior has large design teams capable of producing collections in Galliano’s absence.

Disparate eyewitness accounts of the events last Thursday at shabby-but-trendy La Perle spread like wildfire over the Internet, were splashed over weekend papers in Europe and dominated conversation at the Italian collections, which wind up here today.

Dior reacted swiftly to protect its $1.1 billion fashion franchise. In a brief statement Friday, Dior president and chief executive officer Sidney Toledano stressed the fashion house has a policy of zero tolerance regarding racism and anti-Semitism, and that the suspension of Galliano would remain in force until the results of a police investigation. He declined further comment.

Police sources said Galliano, who was briefly detained after the incident, was inebriated, with an alcohol reading of 1.01 milligrams of alcohol per liter of exhaled air.

Notwithstanding the grave accusations over the alleged racist statements, Dior looked dimly on the fact that its prize couturier created a spectacle of public drunkenness and foul language, sources said. It is understood the designer recently shrugged off suggestions he seek assistance to help kick his drinking habit.

Dior officials are said to be taking a “step-by-step” approach to the fast-evolving crisis — and have yet to rule out rekindling the company’s 15-year affair with Galliano should he be fully exonerated and commit himself anew to the storied house.

“It’s not in their interest to do anything dramatic,” said one source familiar with the situation.

Even the taint of guilt could be enough to unseat the couturier, however, leaving one of the most coveted — and high-pressure — jobs in fashion suddenly up for grabs.

In France, legislation against racism was adopted in 1972. However, decades before that, in 1939, the Marchandeau law had been put into effect to prohibit racist verbal abuse. “It was born in the climate of anti-Semitic hatred that preceded the war and in the context of anti-Semitic propaganda,” explained Jean-Paul Levy, a lawyer in Paris, noting that racist and anti-Semitic acts in France are on the rise today.

On Friday night, Galliano filed a claim of defamation, injury and menace against Bloch, 35, and her companion at the cafe, Philippe Virgiti, 41. The designer also delivered to police three witness statements that he never made any racist or anti-Semitic slurs.

Galliano’s lawyer, Stéphane Zerbib, noted that the designer is “shocked” that Dior sidelined him pending the outcome of the police investigation.

“He feels it is a decision that has been made without verification of the facts and based on one side of the story and he is very shocked about that,” Zerbib said.

The lawyer added that Galliano’s chauffeur, who was present at the cafe during the incident, is a key witness and has confirmed to police that the designer’s account of events is correct. Zerbib declined to provide the chauffeur’s name.

In an interview on Europe 1 radio on Friday, the couple claimed Galliano’s insults included “dirty Jewish face” and “Asian bastard.” Another account, claimed by Web site Sleek-mag.com to be from an eyewitness, was widely circulated among fashion folk. It portrayed the couple as the instigator of the scuffle, mistaking the eccentrically dressed designer as a vagrant and insulting him, to which Galliano is said to have replied to the woman: “You’re ugly, and your f—ing bag is ugly, too.”

Retailers and editors here for the European collections expressed shock and dismay over the allegations, while urging a fair hearing for the Gilbraltar-born, London-raised designer, who catapulted to international fame with his soaring creativity and flair for theatrics.

“It had to be something for Sidney [Toledano] to act in that direct a manner. It must be very serious,” said Ron Frasch, president and chief merchandising officer at Saks Inc. “I think everybody deserves the opportunity to at least have a full investigation. I don’t think we should jump to any conclusions.”

“Everybody in the fashion world and everybody else should wait and hear what the police report says,” agreed Suzy Menkes, fashion editor of the International Herald Tribune. “I want to know what really happened.”

Among industry insiders, Galliano is known for his faultless manners, and a shy disposition in spite of his runway bombast.

“He has a very gentle demeanor. He seems very, very calm so there’s something a bit illogical about the whole thing that’s just not making sense, and hopefully the truth will come out,” said Linda Fargo, senior vice president, fashion office and store presentation, Bergdorf Goodman.

“I’ve never known John to be violent or aggressive like that. He’s a very gentle soul, quite romantic, and I really don’t know what to think,” added Hilary Alexander, fashion director of London’s Daily Telegraph.

Elizabeth Musmanno, who wound up a one-year stint as Dior’s communications director in 2005, characterized Galliano as a “perfect gentleman. No one on this earth will ever convince me that this alley cat has any ill intent towards another human being based on religion or race. No way. No great artist is closed to life and John is the most open spirit I have ever met.”

Galliano’s suspension comes at a time when the Dior fashion house is on a strong upswing thanks to strong sales in its boutiques of ready-to-wear and accessories. Revenues grew 15 percent in 2010 to 826 million euros, or $1.1 billion, while profits vaulted 169.2 percent to 35 million euros, or $46.5 million, as reported. Should the designer fail to fend off the charges of racism, Dior could ultimately be faced with finding a successor to the creative architect of its rejuvenation.

Bernard Arnault, chairman and ceo of LVMH Moët Hennessy Louis Vuitton and Christian Dior SA, the holding company for LVMH and the Dior fashion house, would have at his disposal a stable of in-house fashion stars, including Marc Jacobs, who is renegotiating his contract at Louis Vuitton, Celine’s Phoebe Philo and Givenchy’s rising star, Riccardo Tisci. Galliano himself arrived at Dior in 1996 following one year at Givenchy as the successor to founding couturier, Hubert de Givenchy.

Arnault could also go hunting for design talent outside the group, having privately expressed admiration for such designers as Tom Ford, Lanvin’s Alber Elbaz and Balenciaga’s Nicolas Ghesquière. Sources said the luxury titan has also kept in close contact with Hedi Slimane, who left Dior Homme in 2007 after making it one of fashion’s most influential men’s wear labels.

LVMH’s extended network of talent scouts has their eye on other hot designers, including Paris-based Haider Ackermann and Rodarte’s designing sisters, Kate and Laura Mulleavy.

Dior is Arnault’s most cherished fashion property, and Galliano has been one of his most admired and vaunted creators, especially early in his career. “A gust of genius blew through the room,” was Arnault’s reaction to the 2000 “tramps” couture collection, inspired by the homeless and mentally ill. Arnault has often touted Galliano’s “extraordinary mix of romanticism, femininity and modernity that symbolizes Mr. Dior.”

To be sure, last week’s cafe tussle wasn’t the first instance of designer misbehavior — and it’s a reminder of widespread substance abuse in the industry, especially among creative ranks. Jacobs famously spent a stint in a posh Arizona rehab center in 2007, and a disheveled-looking Calvin Klein walked onto the court during a New York Knicks game to have a word with the players. Klein subsequently sought treatment.

Famous for his outlandish personal style — typically dressed in rumpled, piratelike ensembles, complete with one dangling pearl earring — Galliano was reportedly booted out of his Marais apartment in 1994 after neighbors complained about wild partying. He famously stood up the Queen of England, who had invited him to a state dinner in 1996 for then-French President Jacques Chirac, and also failed to turn up to receive a Lifetime Achievement Award at Savannah College of Art and Design’s annual graduate fashion show in 2008. A spokeswoman at the time said he fell suddenly ill and couldn’t make the trip. A resident of the Marais, Galliano is a familiar face at several local watering holes, including Les Philosophes and La Chaise au Plafond.

His defenders point to his close friendships with several prominent Jewish women, including the recently deceased San Francisco socialite Dodie Rosekrans, one of his biggest clients, and his so-called fashion godmother Sao Schlumberger, who in 1994 offered her beautifully decaying hôtel particulier to a then-cash-strapped Galliano so he could show his collection.

The designer also forged a strong working relationship with Toledano, who is Jewish, partnering with him to build Dior into a force in women’s rtw and leather goods. Toledano is also president of the John Galliano company, also controlled by Christian Dior and on a strong growth track with a slew of recent licensing pacts to extend the brand into children’s wear, fragrances and a range of accessories, from jewelry to hats. The executive has yet to make any declarations about the Galliano company in the wake of last week’s incident.

Galliano, who celebrated his 50th birthday in November at a London club, has left an indelible mark on Dior, waking up a sleepy brand with spectacular showmanship and several important “rupture” moments, including a tough-chic “Matrix” couture show in 1999 and a rousing, hip-hop flavored rtw outing a few months later.

In recent years, Galliano has shown tamer, ladylike collections as Dior ramped up its focus on iconic products, such as its “bar” jacket and quilted Lady Dior handbag, the latter promoted by multimedia campaigns featuring Marion Cotillard.

Still, LVMH has recently demonstrated it has a low threshold for anything that smacks of bigotry.

In October, perfumer Jean-Paul Guerlain made a racial slur during an interview on French television. LVMH-owned Guerlain issued a statement a few days later in which it said the perfumer’s comments were “intolerable” and went against the “culture, values and ethics practiced by the enterprise, which promotes the diversity of talents of all origins.” The statement stressed that Jean-Paul Guerlain, the fourth and last generation in a family of noses, had not been a shareholder since 1996 and retired in 2002.