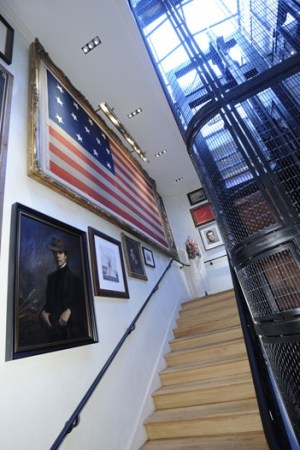 Ralph Lauren is into Phase Two.

The designer has built an empire with sales of $10 billion and a brand that is recognized worldwide — yet believes Polo Ralph Lauren Corp. is just starting its next phase of growth.

“I feel like this is the beginning of our company,” said Lauren, chairman and chief executive officer, in his comments to shareholders at the firm’s annual meeting Thursday at New York’s St. Regis Hotel. “A whole new world is opening up for us. We brought back our licenses in Asia, and we’ve just visited China. There is a whole new world there that we haven’t even seen. We’re building our business for time to come.

“Since going public, we’ve accomplished…some pretty amazing things,” he said, pointing to the growth of the company from $800 million to $10 billion in retail sales worldwide. Corporate revenues last year were $4.98 billion.

Over the last few years, Polo has been a juggernaut that has hit few bumps. On Wednesday, the group reported a 57 percent increase in first-quarter profits to $121 million from $77 million a year ago, and ended the period with $1.1 billion in cash and investments. And the stock has followed suit, closing Thursday at $84.29, a 22.5 percent gain from the close of $68.81 on Aug. 6, 2009, the day of last year’s annual meeting.

After the annual meeting, Lauren elaborated on his notion of beginnings, from Polo’s widening global reach to the growth of the women’s and luxury accessories areas, and the potential to open more stand-alone stores for Polo’s various brands.

“Twenty-five years ago, I opened the [Rhinelander] mansion.… I am now building another mansion opposite that mansion, which is amazing in the fashion business. It projects the fact that our women’s business is big and strong,” he told WWD. Initially, he noted, Polo “was a men’s wear company with some women’s.”

Other Polo brands — some of which he says are still in their infancy, such as Rugby, Double RL and RLX — will in the future be featured either in separate shops or as part of larger luxury stores.

The horizons for growth are “unlimited,” Lauren said.

“The company is about the management, and the team. It’s not only about Ralph. I am leading it, and I have built a team of great people that is growing with this company. I think it’s going to be a unique company in the world because we work on many levels,” the designer said.

The firm has been planting the seeds for a truly global enterprise since 2007, when Polo acquired Impact 21, its Japanese sublicensee for men’s, women’s and jeans apparel and accessories. Last year, it acquired its Southeast Asia license from Dickson Concepts International Ltd., which was for the distribution in China, Hong Kong, Indonesia, Malaysia, the Philippines, Singapore, Taiwan and Thailand.

Most recently, in late July, Polo inked a deal to acquire its wholesale and retail distribution in South Korea from Doosan Corp., its licensee there. The agreement, effective next January, is just the latest in a string of moves by Polo to bring its Asian business back in-house to better secure brand consistency and growth across the region.

Lauren, wearing a double-breasted beige suit, kicked off the 40-minute shareholders’ meeting with a video of company highlights over the past year, ranging from store openings in locales as varied as Greenwich, Conn., Gstaad and Dubai, to innovative Web concepts such as virtual runway shows for Lauren by Ralph Lauren and Rugby, to dressing the U.S. team at the Olympics in Beijing. The video culminated in Lauren opening a 23,000-square-foot flagship, complete with a restaurant, in a 17th-century town house on Paris’ Boulevard Saint-Germain, with Lauren being decorated as a Chevalier of the Legion of Honor by France’s President Nicolas Sarkozy.

And sticking to his theme of a new era, one replete with global possibilities, Lauren said there was “more to come.” He recalled the moment when Polo went public, in 1997, and a senior manager asked him how, after about 30 years in business at the time, he could top what had already been done.

Lauren lauded the company’s past and its ability to diversify the core concept, from different brands such as Polo Ralph Lauren to Double RL, RLX and Rugby. He was also proud of the company’s role in dressing the U.S. team for the Beijing Olympics and candidly told shareholders that when first approached, the company was somewhat reluctant because it had so many other initiatives on its plate.

“It would have been stupid not to do,” he said.

He emphasized to shareholders that the firm was not just a singular sensation; rather, a “diversity of concepts is what really rounds us off.”

Lauren told shareholders the company is different from others in one key way: “What we do is not just on a whim…trying to catch up with the market. We’re leaders. We lead the market.”

In response to a shareholder question, he said the new stores on Madison Avenue, including the revamped Rhinelander Mansion, which will house the men’s and women’s collections separately, are currently set to open in late September. He told attendees the project was over budget.

There was also a question about whether executive vice president Jackwyn Nemerov’s personal car and chauffeur tab was too high at $200,000. Roger Farah, president and chief operating officer, noted about the compensation policy, “The base pay, bonus and equities has the performance-based compensation going up and down, based on performance. Between the earnings, stock price, doubling of dividend and [share repurchase program], there’s a balance between compensation for executives for stellar performance and the value created for shareholders. Our performance is an outlier to our peer group.”