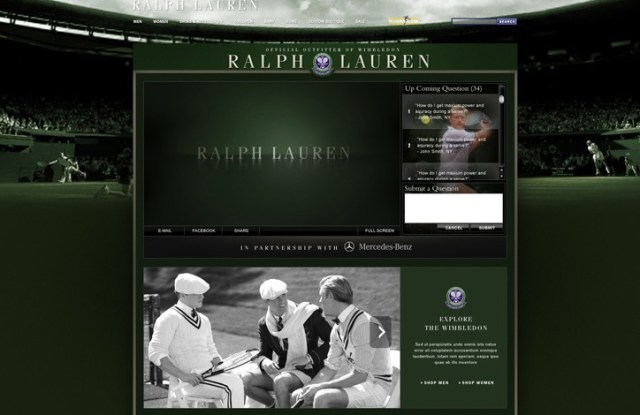 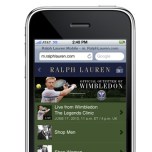 NEW YORK — Polo Ralph Lauren Corp. will mark the 10th anniversary of its Web site this fall and, to kick off the celebrations, will introduce another aspect of what it calls “merchantainment” — just in time for the Wimbledon and U.S. Open tennis championships.

“Every year, we sit down and brainstorm about ways to take our tennis partnerships to new heights,” said David Lauren, senior vice president of advertising, marketing and corporate communications at Polo, which is the official outfitter at Wimbledon and apparel sponsor of the U.S. Open.

Becker has a long-standing relationship with Polo. In 2007, he served as official brand ambassador for the Wimbledon championships and wore Ralph Lauren throughout the tournament. He also launched the Interactive Shopping windows at the company’s New Bond Street store in London that year.

Beyond the marketing nature of the partnerships, Lauren added, the high-profile nature of these sporting events offer a suitable platform to launch initiatives that “can touch a larger audience,” and the new Legends Clinic is no different.

“Wherever you are — in Korea, Los Angeles or on 57th Street and Madison Avenue — you can ask Boris Becker questions, and he will answer them in real time,” Lauren said. “The mission for us is to change the way we create content and also make sure the customer sees the authenticity in our relationship with Wimbledon.”

The live interactive virtual tennis clinic will take place on June 17 at 4 p.m. GMT, or 11 a.m. EST. Lauren’s top customers will be invited to watch the Becker clinic live on court, and Lauren anticipates the online viewership to range between 4 million and 8 million people, with some 25 to 50 questions, depending on the time frame.

That said, online visitors will also be able to buy Becker’s outfit during the clinic with a few simple clicks of the mouse.

Becker and Venus Williams will host an event at the London flagship as part of this year’s Wimbledon festivities. Meanwhile, Williams will hold a clinic of her own at the U.S. Open in August — on the courts at Flushing Meadows.

Starting with the U.S. Open, ralphlauren.com will feature advertising for the first time, beginning with Mercedes-Benz for the clinic, as well as other areas of the site.

Lauren explained that advertising allows Polo to reach more people, as Mercedes-Benz, a sponsor at this year’s U.S. Open, can direct its own online viewership to the clinic and other features on Polo’s site. The move also signals that a fashion brand’s Web site is not just a tool to create a context for the clothes but can also become viable business model that can help fund future initiatives. “It solidifies the merchantainment idea and that it has worked,” Lauren said.