The company will donate proceeds to the Stonewall Community Foundation.

A look from the Polo Pride campaign.

Polo Ralph Lauren has been a champion of gay rights for a quarter-century, but this marks the first time the company has produced a dedicated collection and digital marketing campaign to support the community.

The Pride capsule collection features a five-piece gender-neutral assortment for men, women and children that will be supported by a marketing campaign focusing on inclusion and individuality. One hundred percent of the purchase price from the sale of the graphic T-shirt and 50 percent of the price of each polo shirt, hoodie, hat and tote will be donated to the Stonewall Community Foundation, a nonprofit group that benefits LGBTQ-plus organizations around the world. 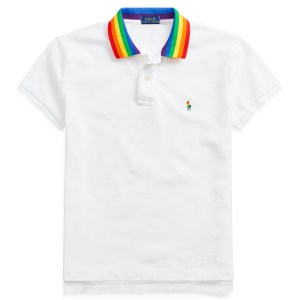 The Polo shirt has been reimagined in rainbow hues for the Pride initiative.  Mohamed Sadek

The campaign launches today on the company’s digital and social media channels.

Alice Delahunt, chief digital officer of Ralph Lauren, said the company has supported the community for 25 years through volunteer activations, corporate initiatives and financial grants to HMI, amfAR, God’s Love We Deliver, the Elton John AIDS Foundation and other charities. The company also supports the United Nations global standards for business protecting the rights of the LGBTQ-plus, and has sponsored AIDS Walk New York since 1990.

“But we haven’t done a Pride campaign before,” said Delahunt, a gay woman who joined Ralph Lauren Corp. around a year ago from Burberry. “But it’s part of who we are and it means a lot to us.”

She said the 50th anniversary of the Stonewall uprising was one reason the company opted to enhance its participation this year, but it’s also indicative of the other socially conscious initiatives it has launched lately. That includes an Earth Polo made from recycled plastic bottles for Earth Day in April and its elevated commitment to sustainability. Its Polo shirt has also been used to raise millions for breast cancer awareness through its Pink Pony Fund, and other initiatives for global disaster relief.

“We believe in our Polo and our purpose,” Delahunt said. “This is our moment to pause.”

She said the ambassadors used in the campaign were chosen for their authenticity. Images from the campaign center around the use of a rainbow-colored flag, a signature of the company that is usually grounded in red, white and blue. “The flag is such an important symbol for us,” she said. “It’s very authentic.”

The Pride capsule collection features the Polo Pony reimagined in rainbow stripes and prices range from $29.50 for a children’s T-shirt and $58 for an adult T-shirt to $128 for a hoodie.

The Pride capsule collection will be available globally starting this month in select Ralph Lauren retail stores; on ralphlauren.com; at Macy’s, Bloomingdale’s, Saks Fifth Avenue, Lord & Taylor and HBC in North America; as well as at David Jones’ Market Street and Elizabeth Street in Australia. The company is also planning to participate in Macy’s multivendor events in New York, Boston, Los Angeles, Chicago, Houston and San Francisco throughout the month of June.