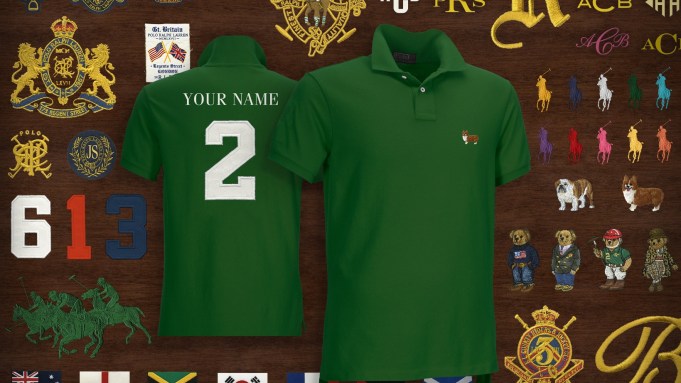 LONDON – Regent Street is magnetizing American megabrands like no other major European city and the latest one to open shop on the storied British thoroughfare is Polo Ralph Lauren.

The opening of Polo’s first European flagship this week is a homecoming of sorts: Ralph Lauren was one of the first American names to land on nearby Bond Street, and the designer has shops dotted around the capital’s upscale neighborhoods, dedicated to different brands.

Regent Street is a different proposition altogether: Spanning 17,561 square feet over three floors, the new London unit for the multibillion-dollar Polo brand is far larger than the first European store for the label, which opened in Rome last November. It has dedicated floors for men’s, women’s and children’s wear as well as the first Create Your Own customization shop.

Although the service has been trialed with pop-ups and one-off projects, the Regent Street space is permanent, and allows customers to jazz up their polo or oxford shirts with national flags, Polo ponies, bears, corgis, English bulldogs, crests, monograms and oversize numbers.

The brand also sees the Regent Street unit as a bridge to a younger audience and to tourists, customers who may not necessarily be making the trip around the corner to Ralph Lauren’s main-line flagship on New Bond Street.

“It’s a big deal for us,” David Lauren, executive vice president of advertising, marketing and communications, told WWD. “Coming to England and opening up a Polo flagship for this new generation is the culmination of almost 50 years of defining and redefining the brand and perfecting it and making sure that we have a sensibility that resonates there.”

He said the Regent Street location was key.

“Global tourists are coming there and you want to be a part of that energy. You need to step it up and stand out and create something that feels distinctive and special. I think when people walk down Regent Street they’ll stop at Polo and think it’s unusual — and beautiful.”

Polo’s arrival is the latest win for The Crown Estate, the British property company that has been upgrading vast swathes of Regent Street — and the surrounding ones too — with the aim of attracting big brands with supersize spaces and new-format concept stores.

Michael Kors and Kate Spade New York are among the recent arrivals, while Coach and Stuart Weitzman, will move later this year into the former Jaeger space, which spans 25,500 square feet. In a separate interview, David Shaw, head of the Regent Street portfolio at The Crown Estate, said the company had been talking to Ralph Lauren for a number of years about moving to the street.

Lauren said it was critical that Polo have a larger footprint in the British capital. “London is the coolest city — it’s so happening, fun and creative and it’s an energy we’ve always connected with. Every year we go over for Wimbledon and we’re celebrating it even if we’re not there. We love being part of the culture — it’s so vibrant on so many levels,” he said.

The store, with its uptown-meets-downtown New York interiors — a mix of warm woods, oriental rugs, butcher’s tiles and an old-style cage elevator — is also the embodiment of the brand’s new vision under chief executive officer Stefan Larsson, whose focus is on amping up the brand’s aspirational DNA; owning the classic, iconic styles, and making everything more “current and desirable.”

Lauren was particularly enthusiastic about the store’s customization service, which the brand has had success with online — making shirts with various colors, monogramming and ponies galore.

“Now we’re offering up dogs, teddy bears, crests — we can customize your own crest. And we’ll be adding new surprises — different sports and cars — all kinds of different, fun ideas you can build into your shirt.”

The store is offering a same-day personalization, done by in-house stitching machines, and the service will soon be expanded further into other products — such as caps — and more symbols for the holiday season. Customers can pick their personal elements on an iPad.

“It’s the first of its kind, and over the next six to eight months, we’re going to be evolving it dramatically,” Lauren said.

At the customization counter there are techy touches such as light projections that change the color of the display shirts or beam cartoonish scenes across them — such as a Polo bear hoisting an American flag on a pole, or Polo ponies galloping toward a goal.

“You can really see the product come to life in front of your eyes in a really cool, techy way,” Lauren said.

The lower-floor ground floor houses the customization area and casual men’s wear, while the ground floor is home to haberdashery and other tailored men’s wear.

Polo women’s apparel and accessories is upstairs, as is Polo Sport for women, which launches fully this fall. Children’s wear is also stocked on the upper level.

Lauren declined to give first-year sales estimates for the store.

According to Shaw of The Crown Estate, prime Zone A rental prices on Regent Street (or the ground-floor areas of a store closest to the street) are currently going for 500 to 600 pounds, or $665 to $800 at current exchange, a square foot.