There were some strong moments, but too few runway shows over too many days and not enough buyers to go around diluted the impact of fashion week here.

By Melissa Drier and Damien McGuinness on March 4, 2008
View Slideshow 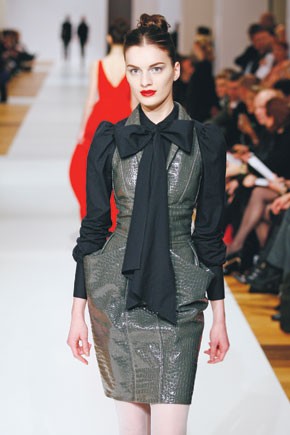 BERLIN — There were some strong moments, but too few runway shows over too many days and not enough buyers to go around diluted the impact of fashion week here.

Under the umbrella of the second official Mercedes-Benz Fashion Week Berlin, 14 German and international designers presented their fall collections on- and off-site from Jan. 27 to 31. The Berlin runway shows didn’t overlap this season with the Premium trade fair, which ran Feb. 1 to 3, nor with the new women’s wear show, Stark (Feb. 1 to 7), due to fashion week organizer IMG’s scheduling conflicts with New York. Two- to three-hour gaps between shows left viewers stranded in the Ost Bahnhof fashion week venue, while the distances involved made a quick run to alternative young fashion platforms such as Ideal Showroom or Project Galerie next to impossible. Both, it should be noted, looked better than ever this season, but suffered from meager attendance.

As for the runway shows, they were a mixed bag. Hugo, which kicked off Mercedes-Benz Fashion Week at Tempelhof Airport, and Joop Menswear by Dirk Schönberger, which followed the next night at the equally imposing Olympic Stadium, signaled a stylistic shift in the German market for fall. There’s a Bauhaus spirit in the air, with the focus on spare, controlled and precisely tailored silhouettes in subdued tones and textiles for a new generation of fashion modernists.

Back on-site, Strenesse Blue also had a new spirit, thanks to the creative direction of Viktoria Strehle, daughter of Strenesse chef Gerd Strehle and step-daughter of Strenesse head designer Gabriele Strehle. She brought a youthful flair to what is now a full-fledged, rather than weekend-oriented, collection, filled with a wide variety of cute and eminently wearable little dresses, slouchy knits and a winning black velvet jumpsuit worn with a rough-cut black shearling vest for a contemporary take on evening. Strenesse Blue often moved to a late-Sixties and Seventies beat, but this was retro seen with a young eye — one delighting in discovery, not familiarity.

Two of Berlin’s designer home team, Michael Michalsky and Sisi Wasabi by Zerlina von dem Bussche, exhibited significantly increased polish for next season. Michalsky also took a stand on silhouette for fall. His calls for nipped waists and a shaped, femme look with lots of attitude. Leather tights worn with shoes of the same tone made a boots-without-end impression — a nod to Berlin’s extravagantly clad ladies of the night, though Michalsky’s women looked like they’d clearly chosen other professions. Leather in general stood out, especially the bow-necked blouson and sexy jumper in plain black or alligator embossed gray leather.

Now going solo, von dem Bussche refined Sisi Wasabi’s trachten, or folkloric, twists, incorporating details such as embroidered rectangles breaking darts and inverted pleats, silver coin buttons, quilted leather elbows and leather emblems. But, inspired by traditionally smocked children’s dresses, the collection got its punch from one- and three-dimensional variations on the theme. There was harlequin printed charmeuse for blouses and dresses, basket weave or patchwork multicolor strips for belts and bodices and knitted versions of the oblique pattern, culminating in the exploded smocking of a cream silk strapless gown — belted in rustic black leather for a funky yet elegant red-carpet look.

Zac Posen closed Mercedes-Benz Fashion Week Berlin, the designer in absentia due to the New York collections. Posen does sell to a few stores in Germany, and told WWD he saw his participation as a good “opportunity to bring exposure to one’s work in a new city. I’m sending a pre-season collection that’s never been shown in runway form.”

It turned out to be resort and not pre-fall, however. Mercedes-Benz made much of “Hollywood glamour from Hollywood’s darling, Zac Posen,” but the nonseasonal show seemed to underscore fashion week’s lack of focus.

Berlin’s trade show, Premium, meanwhile showed signs of bouncing back. Premium attracted 16,354 visitors, significantly up from last season’s 13,822, and even better than the record-breaking 15,647 a year ago. Around 55 percent of visitors came from Germany, and German-speaking Europe. Director Anita Bachelin noted, however, a growing number of Italian, Spanish, British and Scandinavian buyers, as well as a surprising presence of retailers from the U.S., South Africa and the United Arab Emirates. Visitor frequency was spread fairly evenly over the three days (as opposed to last season’s final-day lull), and exhibitors were happy with the quality of attendees.

“Traffic has been great for us,” said Thorsten Link, managing director of Diesel Germany. “All the decision-makers and the top guys of the business have been here.” Link said Diesel potentially would be coming back next season. The show’s compact size makes it by far the best German fair for getting a clear picture of what the market is up to, believes Link. Drykorn chief executive Marco Götz agreed, saying he was more than happy with frequency, calling Premium the best way to get the brand’s name out to new buyers.

For the Italian denim label Gas, though, Premium still has some way to go before achieving its full potential.

Many exhibitors felt that a more compact fashion week also would help boost numbers, by attracting new international visitors who would swing by after the catwalk shows.

Trends at Premium indicated a strong interest in military themes, combining Forties dandy elements with a touch of Seventies boho chic. Dubbed Bohemian Warrior, the look combines structured tailoring, like boxy, short military jackets, with flowing bohemian pieces, such as gypsy blouses or extra-long scarves. Chunky knits remain important but are now getting more structured with big shoulders and collars. Trouser legs are wider, ranging from bell-bottom through high-waisted flare to a superwide Marlene Dietrich cut. And, while colors are subdued, with gray, sand or stone hues dominating, outfits are enlivened by flashes of purple, neon mustard or bright red.

The progressive show, Ideal, which shows German and international avant-garde labels, won praise for its cool layout in the GDR-charm of Café Moskau, but attracted low traffic.

“This show is unique. It’s like a piece of art,” explained Tarek Hassanin, ceo of the label DangerousWork. “But there are just not enough people. If you have a work of art, you have to show it to someone.”

Germany’s power agent, Norbert Klauser, jumped into the fray late last winter, announcing he was launching a new show for upper-end labels, Stark. This is the German word for “strong.” The men’s edition ran Jan. 25 to 30, and the women’s, Feb. 1 to 7, at the old switching station in Prenzlauer Berg. The invitation-only event featured about three-dozen hand-picked exhibitors, and the location and setup was stunning in a chicly alternative, industrial way.

It wasn’t exactly bustling, but exhibitors such as Vienna hatmaker Klaus Mühlbauer or Malin Odelfelt, sales manager for Swedish women’s collection Rigetta Klint, said they were more than satisfied with the quality of buyers who came.

“We connected with a lot of good people. It’s not crowded, but I’d rather do it this way than in Paris where there’s just too much going on,” Odelfelt said.

Klauser aims to go forward with Stark next season. “I’m a team player and I like being a host. But it comes down to whether the world wants Berlin or not. Everyone talks about Berlin — it was time to do something. Not jeans. Not Berlin artsy-craftsy. But fashion.”

Time and timing will tell. Premium and IMG already have announced spring dates, with Premium running July 19 to 21 and Mercedes-Benz Fashion Week Berlin July 21 to 23.