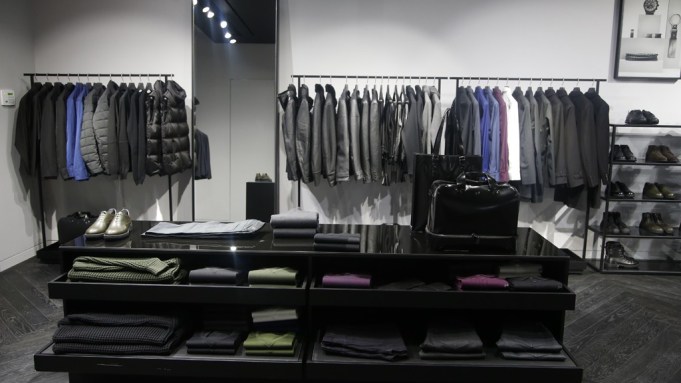 NEW YORK — Porsche Design has opened its largest store in the world, a 5,000-square-foot flagship at 501 Madison Avenue here that has two levels with 100 feet of frontage and a showroom on the upper floor.

“We have quite a [diverse] product range starting with fashion and ending with watches,” said Juergen Gessler, chief executive officer of the Porsche Design Group. “We had to get the whole range into a store in an adequate way for the customer to shop. The former store was less than 1,000 square feet.”

Porsche Design last year introduced its first women’s handbag, the TwinBag, and now offers it in a variety of leathers and exotic skins, ranging in price from $1,550 to $29,000. There also are new handbag styles, such as the LunaBag, CosmoBag and HollyBag.

Women’s ready-to-wear expanded under the direction of Thomas Steinbruck, Porsche Design’s creative director, who previously held the same title at Elie Saab. There are leather moto jackets, $2,800; black cape jackets, $1,900; shearling jackets, $2,800, and shift dresses, $900 to $1,000, all based on the clean, pure, minimal design set forth by Alexander Ferdinand Porsche, founder of the design studio, who believed products should be functional without excess or gimmicks.

Gessler projected sales of $2,000 a square foot for the new flagship, “and that’s very average,” he said. “We expect New York will be one of our best stores. We’re very optimistic.”

The store’s dark wood floors, hand-tufted rugs and leather details were inspired by A.F. Porsche’s first design of a black watch, which started the studio on its way. Porsche designed matte-black titanium timepieces and sunglasses for drivers who had trouble seeing the dashboard. Both optical eyewear and sunglasses are a big category. There are plastic aviators with interchangeable lenses and the original style of lenses worn by Yoko Ono since 1978 are still on display and still in production.

Porsche, which sells its own BlackBerry phone, to the tune of 140,000 units a year, is exploring wearable technology. “It could be an interesting category for luxury brands,” Gessler said. “The technology is on the market. It’s still a very young area. One big category is smartwatches with aspects of taking care of your health. We are evaluating and talking with many companies right now. There are a lot of things going on in this area.”

Sneakers and sportswear through a collaboration with Adidas are on the second floor. Running shoes have a car-inspired suspension system similar to, say, a Porsche. The selling space doubles as a showroom, with a long table in the center of the main room.

The company is opening larger stores around the world. A 4,000-square-foot unit opened in Milan in March; a 3,000-square-foot store in Hamburg, Germany, recently opened, and a franchised unit in Jeddah, Saudi Arabia, will have 2,500 square feet of space.

From 153 stores today, Porsche Design plans next year to have more than 200 units around the world, including its first company-owned store in China, in Shanghai. “We are not present in Japan, which is a huge market for us,” Gessler said.

The company is planning to eventually operate 30 stores in North America. In the U.S., there is room for stores in at least 10 more cities.