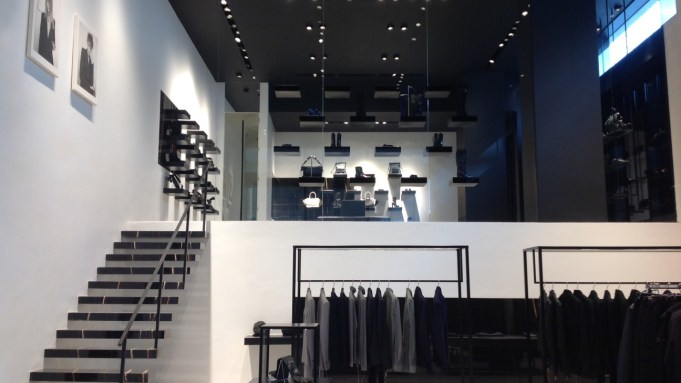 MILAN — Nestled between the Garibaldi and Isola neighborhoods, the Porta Nuova area is considered the face of the new Milan.

Spanning more than 3.12 million square feet, the Porta Nuova complex, which was started in 2005, features a series of residential and commercial buildings connected by bridges and gardens. Operated by Coima Sgr, the complex features Piazza Gae Aulenti as its beating heart. A wide range of international brands opened there of late, among them, Nike, Sephora and Hugo Boss, as well as Italian high-end denim label Replay, which last year inaugurated a maxi store including a restaurant-cum-bar called “The Stage.”

“We decided to invest in this area because it’s the most innovative part of Milan and the most suitable to be a background for our new challenge. This consisted of bringing a revolutionary multiexperience store in the denim arena,” said Matteo Sinigaglia, chief executive officer of Fashion Box, the group controlling the Replay label. “We think Piazza Gae Aulenti is the coolest in Milan and is extremely interesting both in terms of shopping and entertainment. By analyzing all the services it offers (residential, business, entertainment and shopping), this can become the first social square in Italy — a destination able to guarantee new exchanges among people.”

Damiano Gallo, owner of Milan-based real estate company Porta Nuova Estates, put the focus on the positive effect of the project on the area surrounding it.

“The Porta Nuova project injected a new spin into the real estate market in the whole area surrounding the complex, which became one of the most requested in town,” he said. “The value of the buildings in the area increased between 15 and 20 percent in the last year.”

Gallo also revealed that the renting price per square meter of retail spaces in the neighborhood currently range between 500 euros, or $532 at current exchange rate, and 600 euros, or $638, but it is expected to increase.

“As soon as we saw the project, we fell in love and we decided to invest both with our family’s real estate company and the OTB group. Porta Nuova represents the new Milan and it makes the city look  more similar to other global metropolis,” said Stefano Rosso, chief executive officer of OTB, which operates a Maison Margiela accessories store on Via Capelli, the street connecting Piazza Gae Aulenti with Corso Como and which also hosts other luxury shops, including a Christian Louboutin flagship. “With the Margiela store in the area we are also experimenting with a new way of decorating not only the shop’s windows but also the facade, as they do in China and Hong Kong.”

Another brand under the OTB umbrella, DSquared2 directly operates a store, which opened last January, located on the corner of via Capelli and via de Cristoforis. “Dean and Dan [Caten, founders and creative directors  of DSquared2] have been smart in starting the research early and get the best location in the area,” Rosso commented.

One of the first to invest in the area was Ennio Capasa, cofounder and creative director of Costume National, which opened the doors of a flagship, the brand’s second in Milan, on Via Capelli in September 2013. “I developed this project with great passion. The space is inspirational and for me this boutique is the one best representing the soul of Costume National. I like the fact that I have been the first to open on one of the most interesting streets of the new Milan,” Capasa said.

The new generations attracted by the bars and meeting points in the area are in the target of Moschino, which opened a 1,292-square-foot boutique in Porta Nuova last June.

“The Porta Nuova district is growing a lot and is frequented especially by new generations, attracted by the new spaces opened for Expo,” said Massimo Ferretti, president of Aeffe, the group controlling the Moschino label. This aspect made the area particularly appropriate for opening a Moschino boutique, focused on accessories, especially now that under the creative direction of Jeremy Scott the collections target a much younger audience while keeping their signature ironic and glamorous spirit. I think that there are great perspectives for the area, which attracting young people will surely become one of the most dynamic in town.”