The Prada Superstar and the Prada Bowling bag for Adidas will be offered in a limited edition of 700 pieces, and the designs will be sold as a set and available starting Dec. 4.

MILAN — Intersecting echoes and references, the first Prada for Adidas limited-edition release is unveiled today and it blends designs that have both made history and sparked consumer crazes for the two global brands.

The Prada Superstar and the Prada Bowling bag for Adidas will be offered in a small run of 700 unisex pieces, and the designs will be sold as a set starting Dec. 4. The sneaker marks the 50th anniversary of the Adidas Superstar and the bag leverages Prada’s expertise in luxury leather goods craftsmanship, which spans more than 106 years.

Adidas’ Superstar sneaker, originally launched in 1969, is still a cornerstone for the group’s Originals style, as is Prada’s classic bowling bag, which is revisited with references to the Adidas gym bag.

Each piece is numbered with a unique serial number and made in Italy by Prada. Prices have not yet been revealed. Globally, 19 Prada stores will carry the styles in cities ranging from Milan, Moscow, Zurich, Paris, London, Munich and Dubai to Tokyo, Seoul, Macau, Hong Kong, Beijing, Singapore and Taipei. In the U.S., the products will be available at Prada’s New York Broadway store, in Los Angeles, and Miami. They will also retail online through adidas.com and prada.com.

The sports roots, with their clean and functional lines, move into luxury territory. The Superstar sneakers are translated using Prada’s full-grain leather for the upper with the signature Adidas Originals rubber shell toe, finished with a herringbone-pattern rubber cupsole, serrated triple-stripe and a Trefoil logo-pint on the heel, alongside the Prada logotype. 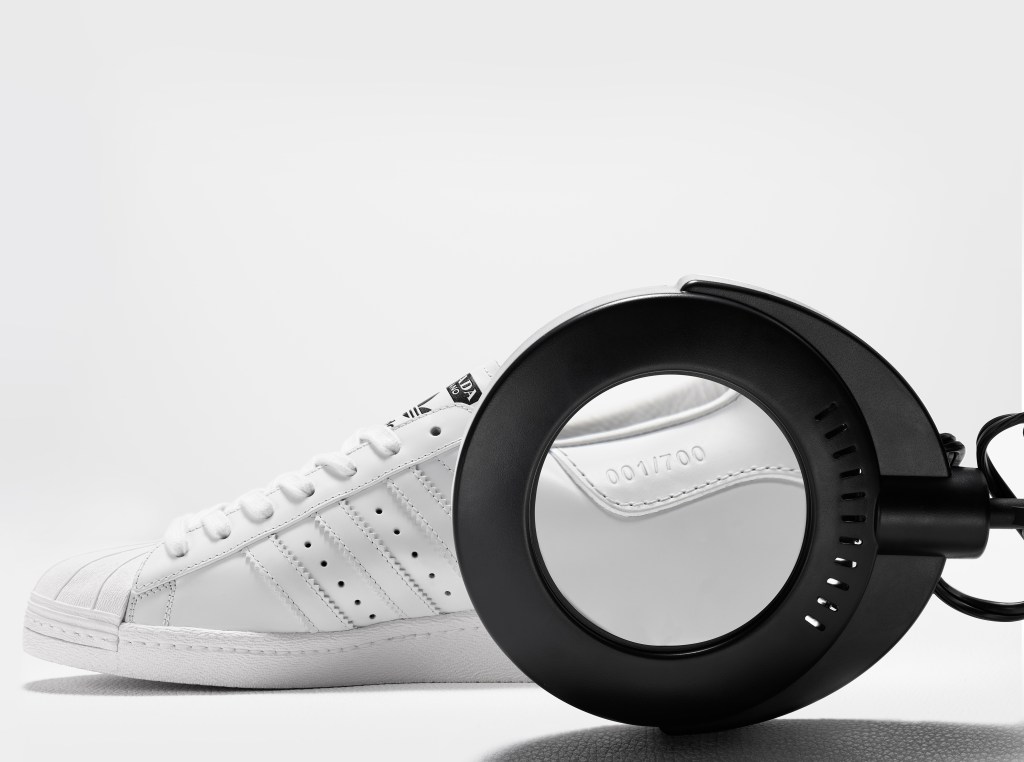 The Prada for Adidas Superstar sneaker with its serial number.  courtesy image

The Prada Bowling bag for Adidas is crafted in supple calf leather with a sports nylon strap, the chassis of the bag bearing the twinned logos of Prada and Adidas Originals.

Both products are offered in optic white with black detailing.

The first release stays true to the guidelines Prada and Adidas declared earlier this month, when they said they were launching a long-term collaboration with the goal to “investigate the realms of heritage, technology and innovation — and to challenge conventional wisdom through unexpected strategies. The new vision draws inspiration from the rich legacies of both to reengineer timeless icons, and leverages the houses’ technological footprint to innovate. The path is an evolving and dynamic structure composed of key milestones, marking a significant departure from existing patterns while building on the houses’ strong milieu of shared approaches and pursuits.”

As reported, Prada and Adidas will release the new Luna Rossa performance sailing footwear in 2020.

This is the first time Prada has joined forces with another brand for such a partnership.