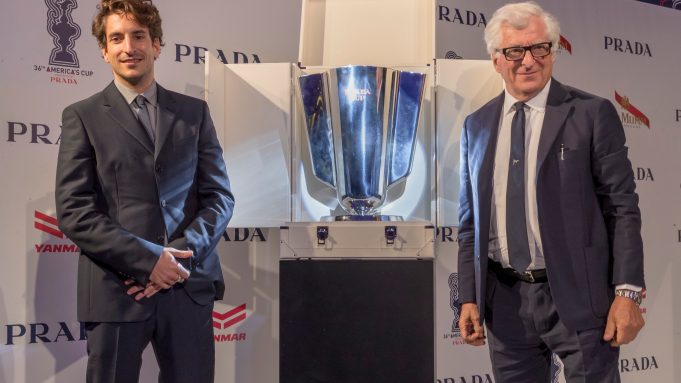 MONACO — There were holograms of skippers from Sardinia, videos of the stunning new technological sailing boats, and a model of the new Luna Rossa AC75 — but all eyes were on the new Prada Cup designed by Marc Newson that was unveiled on Thursday at the Yacht Club de Monaco by Prada Group chief executive officer and chairman of Luna Rossa Challenge Patrizio Bertelli and his son Lorenzo, head of digital communication.

The  silver trophy handcrafted by Florentine silversmiths was housed in a luxurious leather trunk designed and handcrafted by Prada. The trunk, inspired by the first luxury steamer trunks produced by the brand, was made and assembled by hand.

“A passion must be strong, otherwise it’s not really a passion,” said Patrizio Bertelli, himself an avid sailor, on the sidelines of the event. Sharing the stage and posing for a photo with his son was yet another sign that the entrepreneur is starting to increasingly ease him into the business and the many activities that are part of the group. “He is building his experience within the company to one day pick up the baton,” explained Bertelli.

Over 200 guests from the America’s Cup community gathered to celebrate the launch of the Prada Cup — the Challenger Selection Series for the 36th America’s Cup presented by the Italian luxury group.

The Prada Cup will kick off in January 2021 in Auckland, New Zealand, and see the Challenger teams race in a round-robin format to determine which challenger will line up against the defender, Emirates Team New Zealand, seeking to secure the oldest trophy in sport, the America’s Cup.

“This is the first time I’ve had the opportunity to design what I hope will become an icon for the sport of sailing,” said Newson. “I wanted to design something that was unique, unconventional and most importantly unexpected. My inspiration was flight itself and the concept of weightlessness because these AC75s function beyond any conventional notion of sailing. When coming to terms with this challenge, I started to identify a form that was floating above the surface, like these boats that barely touch the water. This trophy is designed not to sit on a shelf, but to be held in the air by the winning team.”

The Australian industrial designer has worked for the likes of Louis Vuitton and designed trophies for the British Fashion Awards.

As reported in January, Prada’s sponsorship of the Luna Rossa sailing team for the 36th America’s Cup competition will amount to 65 million euros, to be paid in quarterly installments until June 2021.

The sponsorship contribution has been determined on the basis of the budget for the preparation and participation of the Luna Rossa sailing team in all the international regattas, consisting of the preliminary series — taking place in 2019–20; the Challenger Selection Series, set for January and February 2021, and the America’s Cup match, in March 2021.

This is a return to the sea for Luna Rossa and its sixth challenge, but fifth race, as the team in 2015 withdrew from the competition in disagreement with the overturning of rules unanimously adopted throughout the previous year by the Oracle Team of the U.S., which was owned by Larry Ellison and which lost the America’s Cup to the New Zealand team.

The Luna Rossa team was established in 1997 by Prada’s ceo with the original name of “Prada Challenge for the America’s Cup 2000.” The team won the Louis Vuitton Cup in 2000, with a record of 38 victories over 49 races. It also competed in 2003 and in 2007, when it reached the Louis Vuitton Cup final.

As the entry period draws to a close, the America’s Cup teams are focused on designing and building their AC75s, 75-foot monohulls that will hit the water in spring 2019.

The concept of a Challenger Selection Series originated in 1970, when for the first time in the history of the America’s Cup there was more than one international challenger vying to race against the defender for the coveted trophy. Organized by the Challenger of Record, the Prada Cup is the final step of the road to the America’s Cup.

With its sixth challenge, Luna Rossa overtakes the historical record of Sir Thomas Lipton, the English sailor who challenged the American holders of the America’s Cup five times from 1899 to 1930.

Media attending the Prada dinner had the opportunity to see the international preview of the film produced by Michael Mann for Luna Rossa, depicting the team’s two decades associated with the America’s Cup. Prada will release the film digitally worldwide on Dec. 26.

In August, Pirelli said it had inked a partnership with Luna Rossa Challenge for the development of a multiyear project leading to the Luna Rossa sailing team’s participation in the 36th edition of the America’s Cup, set in New Zealand in 2021.

As a result, Pirelli will be co-title sponsor of the Luna Rossa vessel along with Prada. In 2019, the first two regattas of the America’s Cup World Series will take place in the Mediterranean while the following year another three World Series regattas will be held in Europe, the U.S. and Asia.

The Luna Rossa Challenge team includes skipper and team director Max Sirena and helmsmen Francesco Bruni and Davide Cannata, a 24-year-old yachtsman who was selected through the “New Generation” scouting program, which is aimed at promoting sailing culture among young people. To this end, Luna Rossa has organized teaching sessions in different schools in Trieste, Italy.

For the America’s Cup’s 36th edition, the sailing team will employ the AC75, which is still under development and is expected to be inaugurated after March 31. The first challenge is expected to be scheduled in October in Cagliari, on the island of Sardinia.