Through May 23rd, visitors can explore the Galleria Vittorio Emanuele II through an audiovisual octagon placed under the arcade's main cupola

By Cynthia Martens on May 7, 2015
View Slideshow 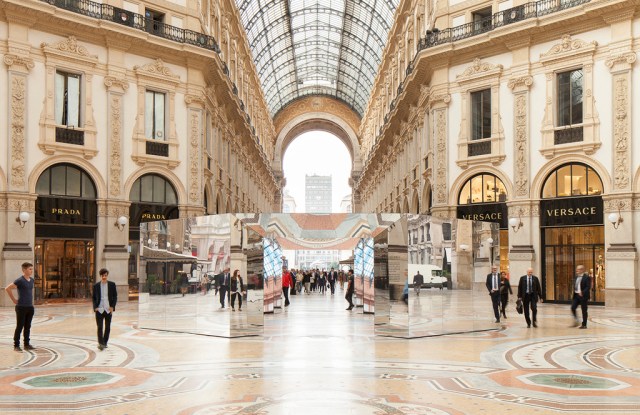 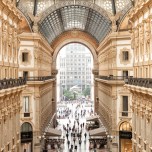 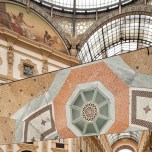 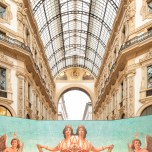 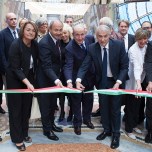 MILAN — Galleria Vittorio Emanuele II is hosting a new installation through May 23 funded by tenants Versace, Prada and Feltrinelli, the three firms behind the 19th-century shopping arcade’s 13-month restoration.

Called “Kaleidoscope,” the project’s main attraction is a mirrored octagon placed beneath the Galleria’s central dome. Stepping inside the octagon’s roughly 936-square-foot dark room, visitors can take in an LED montage of photographs and videos documenting the history of the Galleria and its restoration, free of charge.

Four benches with binoculars have also been placed strategically around the arcade, allowing the curious to zero in on the ornate mosaics, balconies and assorted patriotic symbols that adorn the Galleria’s upper level.

“Versace has an indissoluble connection to all that is beautiful, with art, with culture, and that’s why we jumped at the chance to work with the city, the superintendents [of cultural heritage], and in collaboration with Prada and Feltrinelli, companies that express the excellence of Made in Italy,” said Ferraris, adding: “We are particularly pleased to have made a concrete contribution to return this historic architectural monument to the city of Milan and to all Italians, not only for Expo, but for all that follows.”

“Prada was born here in 1913, more than a century ago, and so I thank the city of Milan for giving us the opportunity to restore our home, [which] is a great pleasure, in addition to being a responsibility,” said Longanesi Cattani.

Athos Ponti, mayor of Fontanelice, birthplace of Giuseppe Mengoni — the architect who designed the Galleria and died just ahead of its inauguration in 1877, after falling from the main cupola — was also present, and thanked the fashion houses, publishing giant and city of Milan for bringing the Galleria “back to its original splendor.”

Versace and Prada are paying double the rent of the former Galleria occupants in their spaces. The extra income is going to support the maintenance of public housing projects on the outskirts of Milan, said Maria Carmela Rozza, assessor of public works and urban planning, noting the difference amounts to 1.5 million euros a year, or about $1.7 million at current exchange.