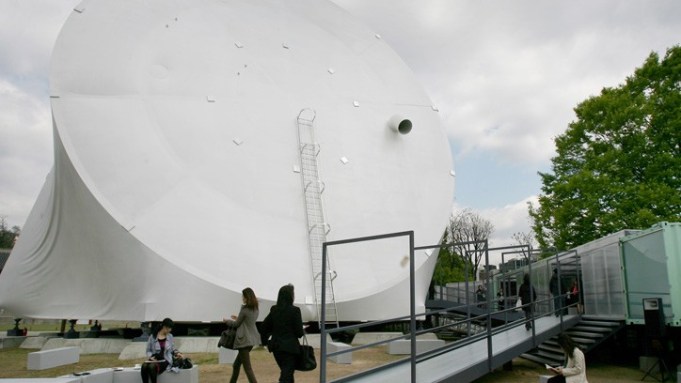 SEOUL — Exhibiting its flair for the dramatic while pushing the boundaries between architecture and fashion, Prada unveiled its tetrahedron-shaped Transformer on Wednesday on the grounds of an ancient Korean palace in central Seoul. Prada is spending $10 million on the much-hyped project, a collaborative venture with Rem Koolhaas’ firm, Office for Metropolitan Architecture.

Miuccia Prada and Koolhaas will host a cocktail party tonight to fete the 160-ton steel structure, which can be lifted and rotated in an hour to create a different shape and interior. The Transformer is currently in the form of a hexagon to stage a reprise of the exhibition “Waist Down — Skirts by Miuccia Prada.” It will go on to host an art exhibition, film festival and fashion show, morphing its appearance along the way.

“It is a building which is very much alive,” said the project’s chief architect, Alexander Reichert, who works out of the Rotterdam office of Koolhaas’ firm.

Reichert spent weeks — wrapped up against the cold in a temporary office next to the site — ironing out design flaws along with the project’s contractor, South Korea’s Eunmin Space & Design. Initially, Reichert thought the building could be flipped or rolled from one side to another, but that would bring the Transformer perilously close to the 16th-century Gyeonghui Palace. So, Reichert decided on a structure that could be rotated by using cranes to lift it.

Each side of the Transformer has three openings, which connect with a series of air-conditioning vents when the structure is rotated. “It’s like a plug that always lands on the same points,’’ Reichert said.

The Transformer is wrapped in a highly elastic polyvinyl chloride membrane that was sprayed on as a liquid. Developed by Cocoon Holland BV, this layer flows over the Transformer’s curves and ripples in the wind, resembling a sail or a tent.

When the “Waist Down” exhibition ends on May 24, the structure will be picked up and rotated to create a rectangle that will show movies from June 26 to July 12 selected by the Mexican film director Alejandro González Iñárritu. Art will then be shown when the structure is rotated again to create a floor plan in the form of a cross. Finally, the Transformer will be picked up once again and rotated to form a circle for a fashion show. All shows are open to the public and free of charge.

Steel plates support the structure, which sits on concrete plates above the palace grounds. Seoul City Council wanted the structure above the ground to avoid damage to the palace grounds. Being a fashion house, Prada, along with Reichert, even made the wooden walkway and temporary buildings around the Transformer — built from old shipping containers — look sleek. The containers were painted green and gray, a color associated with the shades of the palace and of Prada. Inside the Transformer, about 100 skirts are displayed.