By Rosemary Feitelberg on May 10, 2019
View Slideshow 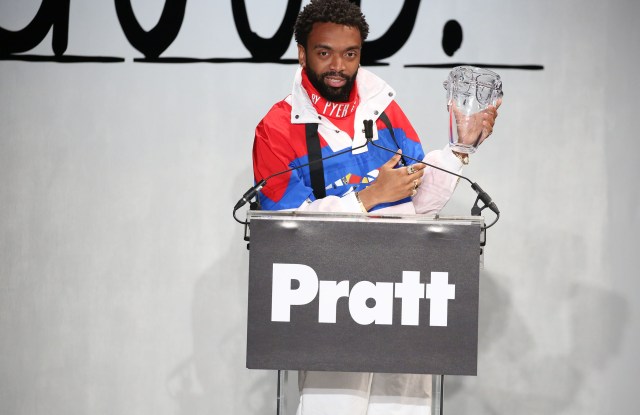 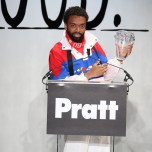 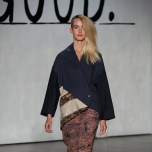 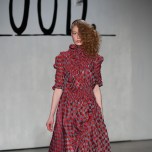 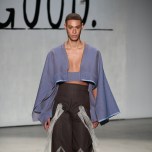 In an interview Friday, Moss said he hoped students would remember that “the process is supposed to be long and intense, and if they stay the course they will eventually reach the goal and the purpose that was assigned to them by the universe. As artists, we go through the ebbs and flows and sometimes we don’t survive them. I just want them to know that at some point it does get better.”

Jean-Raymond received the award from his mentor Dapper Dan, who can appreciate that sentiment. Over the past four years, the two men have had many conversations and “Sunday talks,” Jean-Raymond said, adding that Dan has always been someone who he could count on pre-Gucci. “We navigated through different fashion industries, but at the end, we ended up in the same place,” Jean-Raymond said.

Jean-Raymond’s message of using fashion as a vehicle for communication around social activism and cultural commentary resonated with students, according to Jennifer Minniti, chair of Pratt’s fashion department. “The students are really using fashion as cultural commentary and as a communicative device that is quite inclusive. It is expressive in a way that brings all of their cultures to the table and collages those things together.“

Seniors have the academic year to finesse their collections, which typically have about 10 styles. Minniti said they used a lot of engineering particularly in the materials, prints and textures. Re-contextualizing was also popular to give lines, shape and proportion, Minniti said.

Noting how some of the collection could have gone right to a retail floor, Minniti singled out Ellie Romero, this year’s recipient of the $10,000 Christopher Hunte award, as well as Fiona Conlon. The latter dyed all of her fabrics with sustainable methods such as turmeric and other herbs and vegetables. Romero’s Americana-inspired collection was a mixture of American fabrics like denim, a neutral palette and imagery that wasn’t gimmicky, Minniti said.