Prepping for a Vionnet Exhibit

Show to kick off in June. 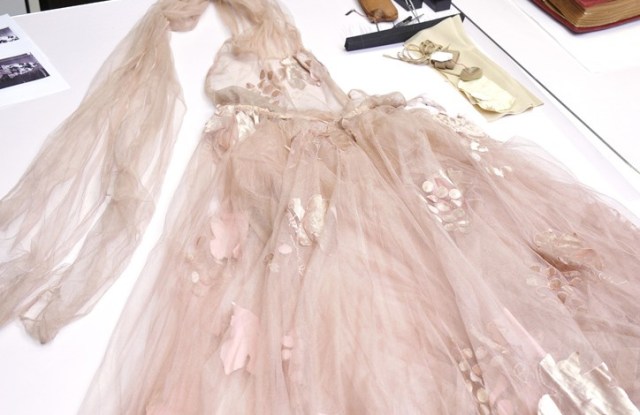 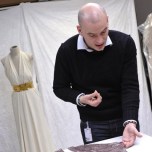 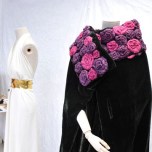 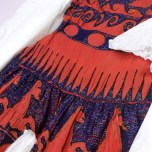 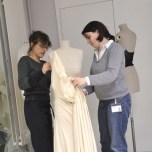 PARIS — A 72-year-old Madeleine Vionnet halterneck gown, a crumpled heap of brittle tulle and silk flowers, has been laid out for inspection in the restoration rooms of Les Arts Décoratifs — and Maximilien Durand, director of the restoration department, issues a grim diagnosis.

“This dress is really ill and will necessitate 60 days of restoration without any certitude of being able to save it,” he said. Things looked less serious for a silk frock dyed in a shocking flush of pink and a geometric dress from the Thirties with a circular neckline in broken mauve lace.

In this clinic for wounded old clothes, Durand has been overseeing the restoration of the museum’s vast Madeleine Vionnet archive that includes over 100 dresses donated by the late designer herself in 1952.

Sponsored by investment firm Natixis, which has injected 1 million euros, or $1.3 million at current exchange, in the project, the restoration has as its deadline the opening of a Madeleine Vionnet retrospective on June 18, set to showcase gems spanning the late designer’s career from 1912 to 1939.

Pamela Golbin, the show’s curator, noted that Vionnet-inspired designs are sometimes seen on the runways of John Galliano and Yohji Yamamoto, but that’s only part of the picture. “The masterpieces have been seen, but not in their full context,” said Golbin, who is also penning a book on Vionnet, to be published by Rizzoli in French and English.

Rodolfo Paglialunga, the newly appointed Vionnet designer who is to make his runway debut during Paris Fashion Week in October, is bound to figure among note-taking visitors to the show, along with the house’s new co-owner Matteo Marzotto, former chairman of Valentino Fashion Group, who acquired the house with Marni’s chief executive officer Gianni Castiglioni in February. Marzotto recently disclosed intentions to acquire a collection of archival dresses from Vionnet biographer Betty Kirke. The previous owners of the House of Vionnet, the de Lummen family, recently chewed through two creative directors, Sophia Kokosalaki and Marc Audibet, in their attempt to revive the legendary house’s clothing line.

For the museum’s restoration team, meanwhile, the exhibition countdown is proving a delicate race against time, especially in view of the sensitivity of Vionnet’s favorite fabrics — namely silk crepe, tulle and muslin — to dust and the elements.

“Vionnet worked with the weight of a fabric, often using seven weights of chiffon in one collection. With time her dresses become more and more fluid and light,” explained Golbin. “One of the problems we’re feeling now is that all of her light-as-a-feather tulle has almost disappeared.”

To prepare the tired dresses for their long stint on mannequins, Durand and his nimble-fingered team have been implementing a network of fine support systems across the garments’ tension zones, tacking skeletons of ribbon, for example, along the inner seams of certain dresses to spread out tension. For the dress with the torn lace neck, a layer of lighter mauve silk crepe will be applied underneath so as to let the original fabric stand out.

“These dresses, that were worn for one evening 70 to 90 years ago will be exhibited on mannequins for [eight] months,” noted Golbin. “The [new linings] are attached in such a way that, if a piece cracks, it’s the new bit that gives and not the original fabric.”

Instead of resurrecting dresses to their former glory by disguising flaws, the role of the restorer, Durand explains, is to stabilize each garment by consolidating fragile spots with fabrics that are as close as possible in composition to the original, in this case silk. The idea is to maximize the allure of a piece while maintaining its authenticity.

Durand points to one mossy green velvet Vionnet cape from the Twenties whose collar of dyed silk roses has grown fuzzy over time, due to the crumbling of the molecule chains in the silk. His solution was to tack a net of fine silk crepe across the blooms so as to make them legible without masking their state of decay.

“We’ve imprisoned the original fabric within a consolidating fabric; we don’t want to lose any information. Restoration must always be visible,” he said.

“It’s not a facelift, it’s more a facial,” pitched in Golbin who, blown away by the simplicity and the sophistication of Vionnet’s designs, likened the restoration adventure to piecing together a puzzle.

Understanding the way Vionnet’s pieces were meant to look when worn has been possible thanks to 75 photo albums that were also donated to the museum by the designer. It contains front, back and side shots of every Vionnet design, and was compiled as a copyright tool. However, the photos cannot reveal fully the designer’s notoriously complex constructions.

“Vionnet’s [thing] is not about little bows and ties, but construction and we have to understand how to tackle that problem,” explained Golbin.

The 750 dress patterns donated by Vionnet were of no help, she noted, as not a single one matches any of the dresses.