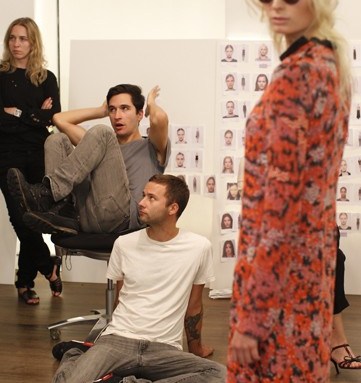 Exactly a week before Proenza Schouler’s spring show, Jack McCollough and Lazaro Hernandez are hard at work on the new collection. Actually, they would be working a lot harder if more than a few samples had come in from Italy. Last season felt young, so they’re going in a more polished, grown-up direction for spring. “The seed for every collection begins with our rejection of the previous collection,” says Hernandez, the talker of the two, though neither says much. “Like, we’re superbipolar and ADD that way.”

They mention a recent trip to India, the same one that showed up in their resort collection, where they liked the look of women in soft fabrics. “It’s not exotic or Indian at all,” says Hernandez. “But it got us thinking about longer lengths and color. This is probably the most colorful collection we’ve ever done.” Just like last spring, there’s a lot of tie-dye, specifically shibori — if they say the word once, they say it a hundred times. It’s a Japanese tie-dye technique in which the fabric is tied in tiny knots and dipped. Someone is dispatched to find a shibori T-shirt and comes back with what appears to be a spongy, child’s-size crewneck that when stretched to its one-size-fits-all proportion shows off a murky mix of lavender and inky blue.

“It looks like a jellyfish,” says Hernandez. “Or the trunk of an elephant,” says McCollough, moving the sleeves into an elephant-trunk pose.

Those who envision the collection process as a frenzied race against the clock, full of meltdowns and last-minute creative whims, would probably find the scene at the Proenza studio a little disappointing. The biggest changes amount to a quarter of an inch here, 6 centimeters there. To tuck or untuck? And the only member present of their clique of fashion cools, which includes Harmony Korine and Chloë Sevigny, is Victoria Traina, who’s consulting and manning the house Twitter feed for the week.

“I can tell you exactly what’s going to happen,” says McCollough, of the schedule. “We’re going to try to finish the clothes today. Tomorrow morning we start castings, then we start looks, hopefully. The looks process is like the most important process for us” — no visitors welcome — “because it’s like where we just have to lock the door, we put the looks together, we figure out what’s strong, what we need to edit out of the collection, what’s the kind of run of show and what’s the story line.” And after all that will they be in good moods?

“No,” deadpans McCollough. “You’ll have to see.”

With 48 hours to go at 7:30 p.m. the following Monday, the mood at the studio is subdued, maybe a little tense. Karolina Kurkova is in for a fitting and the designers take turns pinning her skirt, fluffing her hair and asking her to walk. The room is virtually silent — no music — and not because it’s empty. Their stylist, Marie Chaix, three p.r. people, two photographers, a seamstress, the accessories designer and a production assistant hover, while five interns sit at a table in a corner and stare silently. If anyone talks, it’s a whisper. One side of the room is lined with plain pumps and flat sandals, some of which go to the knee in a basket-weave pattern. “Sensible shoes,” says Hernandez. “Tranny shoes feel old, everyone’s wearing them.” There’s handbags and trays of tribal jewelry, like beetle rings and braided bracelets with a loop that goes around a finger. On the other side are the clothes, racks of matte tweed jackets; long, shibori T-shirt dresses, and sheer slips in fluorescent colors that will be worn over flimsy triangle bras.

In another room, the Fekkai and MAC teams have been running the hair and makeup test. Around 9:30, two models, a blonde and a brunette, emerge in full looks. Suddenly the room is filled with no less than 18 people who form a herd and follow McCollough and Hernandez from one side of the room to the other, taking notes as they scrutinize the messy hair and frosted purple lipstick. “My first impression of the look was, ‘Eh,’ ” Hernandez says, sparking a debate on exactly how many strands of hair should hang out of the sloppy bun.

Things are a bit more mellow the next afternoon, even in the face of rumors that the company is being sold. Maybe it’s the reggae music they’re playing. McCollough sits by the window with an American Spirit in one hand and a Diet Coke in the other. “Just being healthy,” he says. He and Hernandez quit smoking for about eight months, but they recently picked it back up even though “it’s so vile.”

The clothes are all there, and the hair and makeup has been finalized: “No lipstick,” says Hernandez. “And the hair is a little more crack.”

The only close call was earlier in the day when they almost dyed a coral suede crocodile coat black. “We couldn’t figure out where to put it in the show,” says Hernandez. “We were like, ‘Black!’ We found this one person who could kind of do it. ‘Kind of do it’ sounds like you shouldn’t risk an alligator coat. It’s really expensive.” So they’ll try to work the coat into the lineup, which the designers see not as a series of individual looks but a narrative, a big part of which are the models they cast. “Cathy Horyn wrote that we wanted to use models who had ‘life experience,’ ” says Hernandez. “But we actually said, ‘Girls who have had sex,’ ” says McCollough. In addition to Kurkova, they’re using Abbey Lee Kershaw, Anja Rubik, Isabeli Fontana and Diana Dondoe, a house favorite who’s been missing for a few seasons, and relative newcomer Julia Nobis, who’s opening and closing the show. The first and last looks are the easy part, says Hernandez. But the middle is what’s hard.

With just more than 24 hours until showtime, accessories designer Darren Spaziani walks by and says, “I was laying in bed last night and I felt like I was high.”

“If only I felt high,” says McCollough.