Photographer Micaiah Carter and chef Kristen Kish are among the faces featured in this year's campaign.

Micaiah Carter sheepishly admits he’s a bit of a recluse. So it took a lot of courage for the Brooklyn-based photographer to step out from behind the camera to be one of the faces featured in Polo Ralph Lauren’s Pride collection.

But as a result of the pandemic, Carter was able to stick to his solitary existence since he and all the other prominent members of the LGBTQIA+ community actually shot their own images and videos for the fashion brand to use in its campaign, which launches today.

Carter, who set up a tripod on his rooftop for his shoot, said, “I’m a recluse anyway, so I love staying home.” Even so, he said he felt “weird” taking photos of himself “since I’m used to capturing other people.” But he’s happy with the end result.

Kristen Kish, a Korean-American chef who won Season 10 of Bravo’s “Top Chef” and is also the host of the TV show “36 Hours” on the Travel Channel, had her fiancée shoot her campaign images on an iPhone. “No fights broke out, so that was good,” she said with a laugh. They shot it in their Manhattan apartment, which is small but has good natural light, and Kish was also happy with how the photos turned out. “As long as I took a shower and did my hair, I figured it would be OK.” 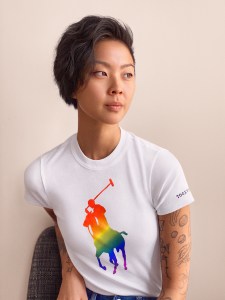 Both Carter and Kish said they agreed to be part of the campaign to help further promote their views on identity, racism, liberty and individuality.

“It came about post-COVID-19 and pre-the Black Lives Matter protests,” Kish said of the Polo campaign. “Anything that highlights peoples’ individuality, I love to be a part of.” And since the explosion of the Black Lives Matter movement, it has made her pause and explore not only her “gayness,” but also whether the choices she’s made in her life fit in with the larger mission of promoting diversity and inclusion for all people.

Although Kish admitted to struggling with self-image and self-worth as a young person — and even into her 30s — she’s more accepting of herself these days. “It’s one of the reasons I did TV and ‘Top Chef,’” she said. “I haven’t always been comfortable with myself and I know what I see is not always what other people see. But I’m learning my own self-acceptance, and this has been therapeutic.”

Carter felt similarly. He pointed to the enlightenment and hope he feels by seeing people come together and hopes his involvement in the campaign will help him advance one of the most important issues in his life: to promote Black transgender people. He said he’s constantly searching for Black trans photographers, queers and nonbinary people to work with, and shining a light not only on Black Lives Matter but also Pride issues will just further the cause, he believes.

Carter wants to share his own experience as a photographer to inspire others and hopes that businesses will also get the message. “It needs to be internal and not just a check mark,” he said. “It should be normalized in a nonstereotypical way.”

Kish admitted that for most of her life, she has overthought what she sees as justice and injustice toward LGBTQ people as well as minorities, but she’s now proud of what she represents — a gay woman, restaurateur and female chef — and is proud to step forward to champion what she believes is right. “This campaign is giving me a microphone to help bring people of all types to the surface,” she said.

Both Carter and Kish said they were grew up wearing Polo, so continuing their relationship with the brand was a no-brainer. “I was the cool kid in school wearing the Polo logo,” Kish said, adding that the company’s longstanding commitment to gay rights also prompted her to be involved. 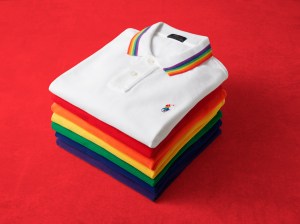 All of the proceeds from the sale of the polos will be donated to Stonewall Community Foundation.

Additionally, Ralph Lauren Fragrances is introducing limited-edition Pride packaging on select fragrances and will also be making a donation to the Stonewall Community Foundation, a nonprofit that benefits an international network of LGBTQ+ organizations.

Alice Delahunt, chief digital officer of Ralph Lauren, said last year’s Pride collection was “a big success. All items sold out on Ralphlauren.com within the first few days of campaign launch. Our iconic polo shirt was the top seller, so in recognition of this item being the favorite, this year, 100 percent of the purchase price from the sale of each will be donated to Stonewall Community Foundation.”

Delahunt said doubling the size of the offering this year allows the collection to be “more inclusive,” and this year’s cast was chosen to represent “an intersectional group of people who represent the breadth and depth of the LGBTQIA+ community.”

Delahunt said that with the pandemic and the protests for racial equity, 2020 “is now becoming a historic year in the fight for equality. So, while most of us are still physically separated, we felt it was important to launch this year’s campaign with a message of togetherness and solidarity: our cast members each created their own unique content from their homes for the campaign, including self-portraits and self-videos. We are maximizing our digital channels and communities to engage people, bring them together and share stories of unity, while we look forward to being physically together again.”

Although big Pride gatherings may not happen this year, Ralph Lauren is instead taking the time to reflect on the origins of the movement, she said, which center around standing up against “injustice and oppression, demanding accountability for violence and systemic discrimination, and insisting the same value and equality for everyone. While sheltering in place and social distancing are still mostly being practiced, digital consumption has increased significantly. Users are looking for ways to connect and share experiences together, even if they can’t be physically together. So, in addition to our Pride campaign being digitally led and centered around amplifying underrepresented voices, we are partnering with key LGBTQIA+ media outlets globally, such as Them. and Têtu that represent and cover issues that speak to the community year-round. Support will kick off with virtual Instagram Live, YouTube and Twitch Events that celebrate Pride Month, amplifying queer voices and hosting conversations of community changemakers.”

“Pride is another way for us to prove that love transcends all borders, and that by standing together with the LGBTQIA+ community, the Black community and their allies, we can send a message of solidarity to the world,” said David Lauren, chief innovation officer of Ralph Lauren.

Carter and Kish are eager to not only get out the message of inclusivity through the Pride campaign, but are looking forward to getting back to work, too. Carter said he recently shot Tracee Ellis Ross for Interview and also directed a Zoom video for the first time. Kish has been “trying to remain sane” while working from home and “navigating the future of my restaurant and all restaurants.” Kish opened Arlo Grey — “It’s what I would have named my firstborn if I wanted to have one,” she said — in The Line Austin Hotel in Texas two years ago. Although the hotel has reopened, the restaurant remains shuttered, but Kish is “aiming for a fall reopening” and plans to head to Texas around six weeks before to prepare.