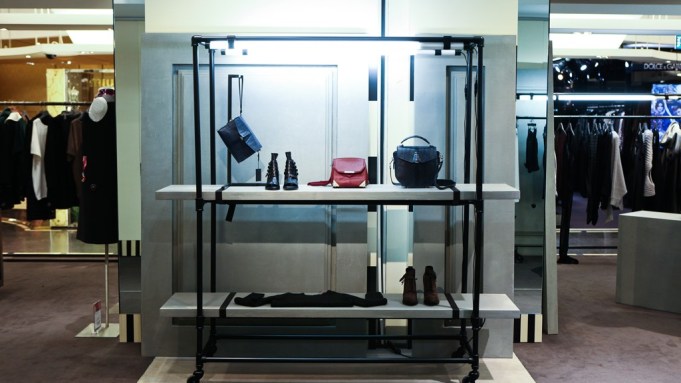 PARIS — Alexander Wang suddenly finds his name on many lips in Paris.

Next month, the New York-based designer will gain his biggest retail foothold in France with the opening of a corner in the Paris flagship of Printemps. And his name has been whispered as a possible contender for top design jobs here.

Until Oct. 31, Wang has a pop-up store in the Maria Luisa in-store boutique featuring design elements such as concrete cubes and a customized tufted ottoman.

Wang’s 420-square-foot corner in Printemps, due to open the first week of November, will be located on the second floor of the Boulevard Haussmann store, alongside brands including Gucci, Louis Vuitton, Alexander McQueen, Miu Miu and Vanessa Bruno.

“It doesn’t get any bigger than this in Paris. It means a lot to us to be able to have the collection here,” the 27-year-old said ahead of a lunch in his honor hosted by Printemps top brass, including chairman Maurizio Borletti and chief executive officer Paolo de Cesare.

Wang’s meteoric rise since launching his label in 2007 has fueled speculation that LVMH Moët Hennessy Louis Vuitton could be interested in buying a stake in the company, and even that he might figure in the musical chairs anticipated at Christian Dior and possibly Louis Vuitton. A spokeswoman for LVMH declined comment.

Wang giggled nervously at the mention of the rumors, but also declined to elaborate. Emphasizing his pride at having grown his company without external financing, he nonetheless did not rule out an alliance in the future.

“I always take a meeting and I always want to hear what people have to offer, but at the same time, I’ve been very content with focusing on our own brand,” he said. Wang said that if he took on an additional design gig, it would have to be something outside his comfort zone.

“If I was to do something else, I would want to do something that would be completely different from me,” he said, adding: “Sometimes you don’t get to say all you want to say in your brand.”

He cited as an example the recent appointment of Opening Ceremony co-founders Humberto Leon and Carol Lim as creative directors of Kenzo.

“When the right opportunity comes, it will present itself in a way that I’ll be inspired by it. But right now, it’s not like, ‘Oh I’m after that house, I want to do that,’” he said.

Wang has plenty to keep him busy. He is preparing to open his first overseas flagship in Beijing in 2012 and has around 10 shop-in-shops opening across Asia in the next six months, in locations including Singapore, Bangkok and Tokyo.

He is also expanding into new categories: home lifestyle accessories and, tentatively, men’s shoes in 2012. Wang is also mulling a fragrance launch but is waiting for the right partner for his independent label, which presently only has one licensee, for sunglasses.