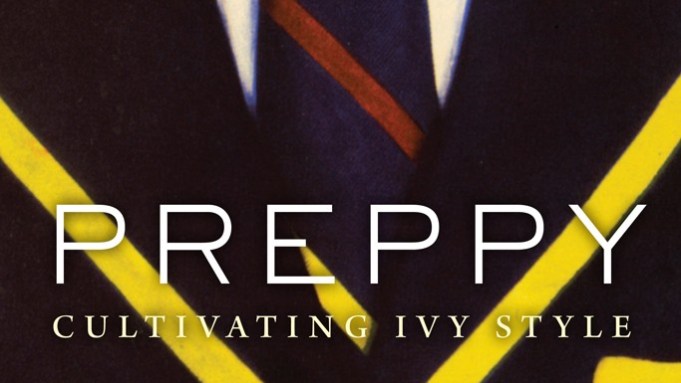 Following John F. Kennedy’s assassination in 1963, his brother Bobby took the late president’s inauguration suit from 1961 back to the New York store Chipp, where Kennedy had bought it, and asked them to remake it in his own — much smaller — size. Chipp did so, and there was a lot of fabric left over, recounted Paul Winston, son of the store’s founder, Sidney Winston.

That’s one of the compelling anecdotes in the new book “Preppy: Cultivating Ivy Style” (Rizzoli; 176 pages; $45) by men’s wear designer Jeffrey Banks and the journalist Doria de La Chapelle, who was also Banks’ longtime publicist. The book, out in October, is a scholarly exploration of the roots of preppy style, enlivened with a treasure trove of historic photos and illustrations. The photos of boarding school students from decades past are particularly fascinating, as they show how consistent the look has been, even to this day.

President Kennedy’s influence on preppy-dom is recounted, as are the contributions of other pillars of prep, such as Katharine Hepburn in her tweed skirts, Grace Kelly in her cashmere twinsets and Howard Hughes in his golf knickers. Edward, Prince of Wales, is of major import for many reasons, key among them that he popularized sporting clothes as casualwear and insisted on unstructured designs with minimal linings. Sports and comfort are a hallmark of preppy style to this day.

The book traces the origins of the style to the Ivy League universities of the East Coast, where, following World War I, a privileged set of young men developed a new style centered on a greater amount of leisure time and athletic influences. Princeton, in particular, was fertile ground for the cohesive new look, as it was among the more homogenous and isolated of the Eastern schools, with a student body largely compiled from just a handful of preparatory schools.

“They then embellished the look with the best possible accessory: an air of complete and utter nonchalance,” write the authors, who also collaborated on the 2007 tome, “Tartan: Romancing the Plaid.”

While the book is a spectacle of celebrities and socialites, lush advertising campaigns and intimate campus snapshots, the rich visuals are complemented with plenty of history and insightful factoids. The Bass Weejun, or penny loafer, is conceptually related to the Native American moccasin and was later transplanted to Norway, before becoming a collegiate staple, point out the authors. And the sports jacket popularized on college campuses was descended from the English Norfolk jacket, originally designed for hunting grouse.

“Preppy isn’t just a way of dressing, it’s a culture and a language,” explained Banks, in a navy Lacoste shirt and red chinos. “It’s all about nuance.”

Modern-day designers like Ralph Lauren and Tommy Hilfiger have transformed preppy style with their own versions of the campus classics. Hilfiger has even reworked the classic duck boot, made famous by L.L. Bean, by adding a 5-inch heel to it, turning it into a head-turning fashion item.

“Ralph Lauren made preppy lusher and more desirable,” said La Chapelle. “Every generation has its own interpretation of preppy.”