Designers Jack McCollough and Lazaro Hernandez have teamed with a group of 20 investors led by industry veteran Andrew Rosen and financier John Howard.

By Evan Clark and Marc Karimzadeh on July 29, 2011
View Slideshow 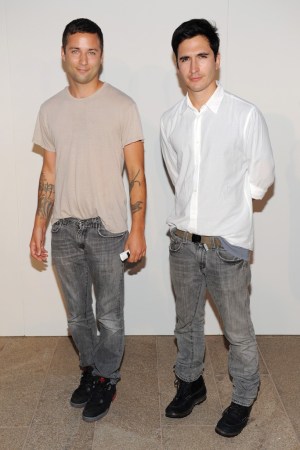 NEW YORK — Proenza Schouler is ready to take the next step.

This story first appeared in the August 1, 2011 issue of WWD. Subscribe Today.

After more than a year of negotiations, designers Jack McCollough and Lazaro Hernandez have severed most of their ties with Valentino Fashion Group and teamed with a group of 20 investors led by industry veteran Andrew Rosen and financier John Howard, giving their company a financial boost and additional expertise as it seeks to expand.

The new investment confirms a report in WWD last September that Rosen was in talks to acquire the brand.

According to a source close to the situation, the group has invested $10 million to $20 million into the business and assumed debt in exchange for a minority stake equal to that held by Proenza Schouler’s management. But very little of the new cash flowing into the business will be going to McCollough and Hernandez, who were said to have passed up opportunities for a bigger payday in order to have more control over their destiny.

The new arrangement should free the designers and chief executive officer Shirley Cook to focus on the development of their brand. Sources noted this leaves them with a minority stake in the business, whereas before they were said to own 55 percent of the company.

Valentino Fashion Group, which is owned by private equity firm Permira, paid an estimated $3.7 million for a 45 percent stake in Proenza Schouler in 2007 and has retained 5 percent of the company.

“We are thankful to VFG for giving us a start, and allowing us to get where we are today,” said McCollough, Hernandez and Cook in a joint statement. “There’s so much we’d like to accomplish and have found the perfect complement in John and Andrew to help us realize our dreams.”

The designers and executives were not available for further comment, but the statement described the deal as a “recapitalization” of the brand intended to propel the company into “a new phase of development.”

“When we look at the current state of American fashion, we see the next generation focused in the advanced contemporary space,” said Rosen and Howard in a joint statement. “We believe that the Proenza business is the future of American luxury, and uniquely poised to compete in a global marketplace, which is currently dominated by European designers. In infusing this brand with our resources and experience, we will position this business to achieve its full potential.”

Sources speculated that as a business, Proenza Schouler was too small for Permira, which counts Hugo Boss as well as Valentino among its brands. It appears that Permira put much of its focus and resources behind Valentino and that company’s transition after its namesake founder retired. The parting is said to have been amicable, with all parties agreeing that it wasn’t the right fit. VFG, however, was keen to keep at least a small stake in Proenza Schouler, which could be seen as a vote of confidence in the brand’s potential.

With Rosen and Howard, the designers are getting two seasoned backers with plenty of expertise in the fashion industry. Rosen has a proven track record of building businesses, not just with Theory but also with Theory-owned Helmut Lang, where he has been instrumental in turning the label around and making into a top contemporary line. More recently, Rosen flirted with the designer segment when he brought in Olivier Theyskens to spearhead the creative direction of Theory and Theyskens’ Theory. He has been a mentor for designers at his other investments Rag & Bone, Alice + Olivia and Gryphon.

Howard has a reputation as a savvy dealmaker and through Irving Place, which currently manages $2.7 billion, has invested in Seven For All Mankind, Stuart Weitzman, Aéropostale, New York & Co. and others.

Sources speculated that the new funding would be used to build Proenza Schouler’s assortment in the designer area before venturing into new tiers. That could include an increased focus on accessories, retail, e-commerce and potentially a higher profile in denim. Proenza Schouler has already collaborated on jeans with J Brand, a denim company majority owned by an affiliate of Irving Place.

Hernandez and McCollough have been darlings of the New York fashion scene practically since launching the label based on their mothers’ maiden names in 2002 at age 23. Their collections have been going from strength to strength, and they were able to build a loyal following among much-photographed downtown socials like Lauren Santo Domingo and Vanessa and Victoria Traina.

In June, the duo won their second CFDA Womenswear Designer of the Year award. The designers were also the first recipients of the CFDA/Vogue Fashion Fund in 2004, among several other accolades since they established their company.

More recently, McCollough and Hernandez have been ramping up their accessories business, most notably with their signature PS1 satchel and their shoes. They also added a line of small leather goods on their e-commerce site, and have been working on costume jewelry.

Perhaps the biggest indicator of their growing influence is the way in which their work is being copied, and the designers have taken an active stand in the fight against knockoffs. In mid-July, Hernandez testified before the House Judiciary subcommittee on Intellectual Property, Competition and the Internet on behalf of the Council of Fashion Designers of America, outlining how the business has been damaged by knockoffs.