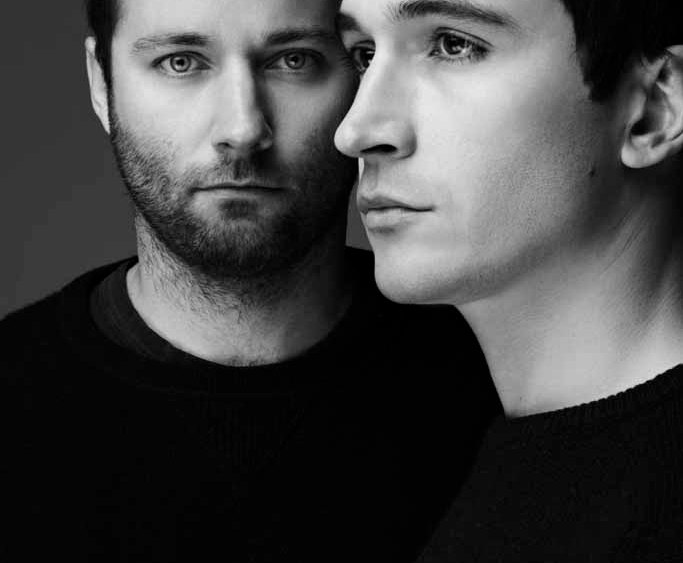 Proenza Schouler’s Jack McCollough and Lazaro Hernandez arrived in fashion at a critical moment, as an American industry suddenly felt the need for a jolt of young talent. The Proenza boys have it all — talent, star power, the germ of chic and, it turns out, the savvy to grow up and grow big.

Good news: Your publicist/mentor Pierre Rougier has arranged an appointment with senior editors from British Vogue. Bad news: Pierre and the British Vogue team can’t gain access to your live/work loft; you and your friends don’t hear the phone. You’re all dead asleep, sprawled amongst empty alcohol containers after a “crazy party” the night before.

“God, that feels like ages ago. It feels like another life,” says the pants-wearing Jack McCollough, the only fifth in view not an empty booze bottle, but exit number five from the recent, fabulous fall Proenza Schouler collection now hanging on the racks of the brand’s spacious SoHo showroom. He and Lazaro Hernandez moved the business there after the Walker Street building was shut down due to a counterfeit operation run out of the basement. Law enforcement may have done them an inconvenient favor; leaving marked one of several small milestones in the company’s development.

In one’s early 30s, 12 or 13 years are a lifetime ago. During that span you really grow up, transitioning from post-adolescence, when judgment and reasoning are still clinical works in progress, to the full adult you’re going to be. If you’ve had your own business throughout, you may not consider it nascent. But fashion is an industry in which youth is worshiped but, on the brand level, longevity rules. At 13, Proenza Schouler is still in its formative phase, yet formed enough to present early success and vast potential to the world.

Hernandez and McCollough have packed a lot of growth into their brand’s decade-plus. They burst into industry awareness with a dazzling senior show at The New School’s Parsons School of Design, a collection purchased by Barneys New York. At the time, American fashion was lean on breakthrough talent who’d lasted. Narciso Rodriguez and Derek Lam were the more recent successes with Michael Kors and Marc Jacobs still considered young stars. Others had tried, but none stuck. Hernandez and McCollough arrived at one of those critical moments on the precipice of change. Culturally, emergent social media opened the inside world of fashion to outsiders, and the American industry was about to embark on a new, youth-nurturing platform. The Proenza boys, as they were and sometimes still are called, had the talent and charisma to help force the change. Their arrival would resonate with future rounds of young aspirants; whereas once they were the inspired, now they’re the inspiration.

From de-linting in their underwear and showing clothes on wire hangers, the designers — together with chief executive officer Shirley Cook who has been with them from the start — have built Proenza Schouler into a business of considerable size; various industry estimates average in the $85 million arena. They have more than 250 points of sale across more than 20 countries, and a tight network of their own stores — nine in total — for which they have conservative growth plans.

Most importantly, they believe deeply in fashion and that creative expression need not fall victim to growth.

They started with a clear belief system, if not a fully formed aesthetic. “There was a downtown fashion scene, kind of reappropriating vintage clothing and that sort of thing,” McCollough says. Between them, they run through a litany — Benjamin Cho, AsFour, Zero [Maria Cornejo], Susan Cianciolo, punctuated by Hernandez searching for one more name: “Jesus, or Christ, Imitation of Christ!”

While they admired the deconstructing/distressing work being done, their instincts ran counter. They felt strongly about construction, an affinity rooted in the antithetical beliefs that if the current cool was to destroy, then real subversion lay in its opposite, and in a traditional view of artistic education: If Picasso had to learn how to draw and paint literally before he could go all Blue and Surreal, they had better well know how to build a jacket. At the same time, they’re children of the Nineties, “a generation of grunge,” Hernandez says. “It’s a weird sort of vision: the atelier couture thing, but the vision of someone who grew up in the Nineties. It’s the mix of both worlds.”

Along the way, they experimented with numerous motifs, only in the last couple of years clarifying their aesthetic. It swings between a tech-inspired “Tumblr vibe” and more overt refinement, delivered with great range from one season to the next, lest the shows turn predictable. They’ve also defined their customer. Hernandez: “A contemporary woman linked in with the arts, fashion, music, theater. Interested in luxury, in creativity.” McCollough: “There’s a nonchalance. There’s something kind of undone about her, an easy spirit the way she carries herself.” Hernandez: “A weird dichotomy, a casualness to her attitude, but the choices in clothes are always impeccable, the taste level elevated. But the attitude isn’t fussy.”

That approach has made the Proenza Schouler show one of the most anticipated of every fashion season. As their pre-season collections have grown, now accounting for 60 percent of ready-to-wear sales, they’ve intensified the drama on their runway. A perfect example: Their most recent show, a stellar outing inspired by photographs from the Forties and the work of Helen Frankenthaler. Prim polka dots abstracted audaciously into grommets, tony tweeds twisted and slashed, the Forties influence ultimately veering toward a bold, beautiful and unintentional tribal power. Yet the designers still want their runway to resonate as real. “That balance between art and commerce has always been the balance we’re looking for,” McCollough says.

Essential to that balance is continued development of accessories. The PS1 Bag debuted in 2009, just as the recession exploded and discretionary sales tanked. Hernandez says the bag “saved” them; overall, the Proenza business increased in 2009, even as it took a big hit with the clothes.

“Our business really changed when we launched bags,” McCollough says, noting that retailers took them more seriously once the bags arrived in the showroom, offering a first inkling of a full “Proenza Schouler world.” Though recent strong clothing sales put their current rtw-to-accessories ratio at 50:50, that breakdown will unlikely remain static. Yet even as they embrace the category, the designers find it challenging, and not just on the competitive level. Whereas they design shoes — done in partnership with Iris — as integral to the fashion look, “a bag is an external object,” according to McCollough, “more of a product design exercise versus a fashion exercise.”

Another business-building challenge: their own stores. The brand has two in New York, on Madison Avenue and Greene Street, three in Seoul, two in Bangkok and one each in Hong Kong and Singapore, and is close to opening in Tokyo. While the designers and Cook would love to venture into Europe, they find the environment difficult without the structure prevalent across Asia, where they’ve partnered with Club 21 and, in South Korea, Shinsegae.

So far, Hernandez and McCollough have followed “a slow build” approach, acting instinctively rather than according to a master plan. Yet they acknowledge the need for increased strategic planning as the company expands.

In 2011, a group of investors led by Andrew Rosen and John Howard bought into the company, ultimately acquiring a 50 percent stake. A board headed by Rose Marie Bravo, who mentored Cook through the Council of Fashion Designers of America’s Vogue Fashion Fund, meets regularly, “so it’s a whole different level of professionalism,” Hernandez says.

Among the categories that make sense to investigate: men’s wear and fragrance. “The irony of growing is that it takes more money to do so,” Hernandez says. “We’re looking to raise capital. Hopefully by this year, there will be something happening, and we’ll definitely use that to take it to the next level.”

The designers claim not to fear a minority ownership situation. The keys, they say: Retain creative control and know thy investors. “I think most of [our investors] realized that if they let us do what we do, they’re going to have a return,” Hernandez says. “The wrong thing for them to do would be to clip our wings. We haven’t let anyone down yet.”

They have experienced the diverse stresses of running a business. McCollough estimates that putting on a show takes up 20 percent of their time, the imbalance spent in all kinds of meetings, “day after day, hour after hour. There’s press we have to think about, retail, all of the other creative stuff, h.r.…”

Hernandez cuts in: “People and their problems, so many problems.”

Despite such irritants, they don’t whine. Instead, they retreat to their house upstate where they immerse themselves in the actual fashion design aspect of the fashion business. They even see an upside to the workload. Sure, their artist friends may have a gallery show every couple of years and paint on their own schedule, and film types can take breaks between projects, time to rest and restore.

Good news: “You make a movie and it’s bad, it takes another five years to redeem yourself,” McCollough says. “[For us], three months later, we have another collection to say something new and exciting.” Adds Hernandez: “It’s easier to redeem yourself.”