By Barbara Barker on May 4, 2016
View Slideshow 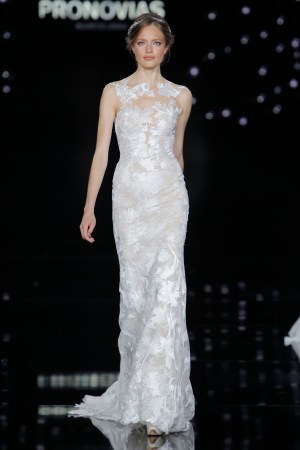 “The show was beautiful; it’s the most wonderful production they’ve ever done,” said Mara Urshel, owner of Kleinfeld in Manhattan. “The synchronization and the lighting [1,500 colored lights were strung over the runway] have never been better and Pronovias brides looked like real brides with A-lines, ball-gowns and beautiful laces. We’ve been selling the label for the last four months and very successfully.”

The Barcelona-based manufacturer, which is in its 52nd year, last week invited 2,400 guests — mainly specialty retailers and established customers from the multinational’s far-reaching global network; a few celebrity faces; Catalan politicians and local socialites, and 400 members of the international and domestic fashion press — to its home base for a preview of 2017.

Buyers came from 85 countries including 61 from the U.S. and Canada.

The two-day presentation began with a nighttime runway show and the theme “Le Ciel” in the Montjuïc fairground’s Italian Pavilion. Featuring 46 styles by Atelier, Pronovias’ high-end line overseen by 45-year-old creative director Hervé Moreau, dresses ranged from form-fitting silhouettes and shapely fit-and-flare to full-skirted gowns in fine embroidered laces, a new “stretch” chiffon, crepe and embroidered tulle with sheer illusion detailing, low and less embellished back treatments, a few long sleeves, beadwork and trains. There were no short lengths — and no color.

Buyers praised the show’s variety. “It was spectacular, more commercial than usual and it covered all the bases, all taste levels from the laces, deep necklines and transparencies to dresses with a touch of the traditional. There were sexy styles but nothing vulgar,” said Abdel Méndez, co-owner of multibrand store Radel’s Novias in Puerto Rico and a 15-year veteran of Pronovias. Radel’s Novias sells 500 gowns a year ranging in price from $2,000 to $5,000.

“Pronovias is number one in the world in everything — design, fit and promotion — and it’s our top line,” he said. “Our brides are between 20 and 30; they’re on top of the trends and quality is a priority. We work with all styles, from big ballskirts to mermaids and long trains. We’ll be buying a little bit more this year.”

The next day, retailers placed orders at Barcelona’s Palau de Congressos de Catalunya, where the group’s three upscale lines stretched over two floors with 125 gowns from Pronovias’ core collection; 65 from Atelier Pronovias, and roughly 85 cocktail/mother-of-the-bride dresses from the Pronovias Fiesta brand, along with a range of veils, jeweled tiaras, clutch bags, shoes and hats.

“The show was great, great, great; we loved it,” effused Dulce de Los Reyes, whose Coral Gables Bridals, in Miami, Fla., is 35 years old and was the first U.S. store to pick up the Spanish label, she said. “Seventy-five percent of our brides are from South and Central America and they’re looking for romance and shape. Pronovias has combined both concepts with more innovative versions, especially in lace and beading.

De Los Reyes said she would “most likely” increase her buy — principally from Pronovias’ core line and “a little” Atelier.

Kleinfeld’s Urshel said she planned to buy mostly Atelier. “The U.S. is a hot market [for the brand] and our business is sky-high because we carry a broad selection of gowns and cater to many demographics, fits and price points. As for quantities, we’re going to buy what we need [Pronovias has a minimum of 12 pieces] and it will be a lot more than recent years.”

The big trend in bridal is “to bring back the real bride. The New York market, for instance, is becoming a little more traditional,” she said. Also important, “but not a trend, jumpsuits and pantsuits are another option, especially for same-sex marriages, and we have a lot of them,” she concluded.

New to the job, Alberto Palatchi Jr., the 23-year-old son of the owner/president, is Pronovias East Coast area manager since last fall. “We’re becoming a pretty hot brand in the U.S. and Canada,” he said, where Atelier has increased its reorder business by a whopping 352 percent so far this year. The company’s objective for 2016 is to reach 450 accounts [current total is 350]. “The U.S. is increasing day-by-day; we want to be number one.”

Pronovias has a retail presence in more than 105 countries with 155 stores and over 4,000 sales points.