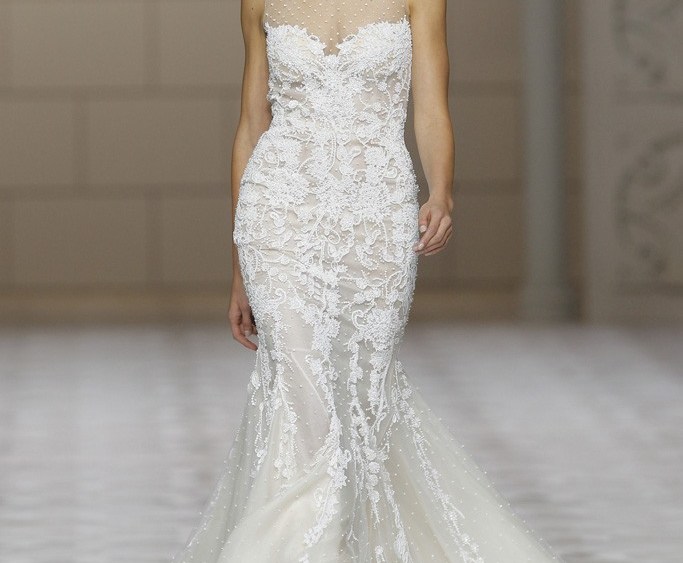 Buyers were not disappointed. Lynn Harlow, owner of Promises and Lace in Burlington, Ontario, Canada, cited “the beautiful body-hugging dresses, gorgeous illusion backs and with the beadwork, they came in with a vengeance this year. And the prices are bang on.” Harlow said she’s increasing her buy about 20 percent.

Lauding the fabrics for next spring, she added, “The jacquards, silks and delicate laces are magical; I got goose bumps. We are looking for something very special; it has to have personality. Pronovias is my bread-and-butter line, and the fit is like no other.”

The Barcelona-based manufacturer is celebrating its 50th anniversary this year. The company invited 2,000 guests — mainly specialty retailers and established customers from the multinational’s extended global network; celebrity faces like Camila Alves (sans Matthew McConaughey) and Bar Refaeli; local and European socialites; international fashion editors, and regional politicians — to its home turf Friday and Saturday for a preview of 2015.

Buyers came from upwards of 80 countries, including Russia, Libya, Peru and Panama, and a record number — 180 — from the U.S. and Canada, the company’s strongest markets, said Pere Brugal, New York-based wholesale director for the Americas.

The two-day presentation began with a nighttime runway show with the theme “Pronovias Dream Factory” in the fairground’s Italian Pavilion. Featuring 50 styles by Atelier Pronovias (a label formed after the death last year of creative director Manuel Mota), dresses ranged from form-fitting silhouettes and shapely fit-and-flare styles to full-skirted gowns and a few short lengths in French lace, frothy tulle, silk brocade and chiffon with delicate embroideries, draping, a bit of fringe, beads and crystals.

Closing the show was Pronovias veteran Karolina Kurkova in transparent lace with spaced-out embroideries that the media here said looked like tattoos. She was followed by 67 workers, including seamstresses, cutters and patternmakers, each in a white smock.

The following day, retailers placed orders at Barcelona’s Palau de Congressos, where the group’s four high-end lines were presented on two levels with over 200 gowns from Pronovias’ core collection; 80 from Atelier Pronovias; a capsule grouping of 15 styles by Elie Saab, the only outsider line, and about 125 cocktail/mother-of-the-bride dresses from Pronovias Fiesta, along with a range of veils and accessories.

Buyers praised the brands’ design variety. “Pronovias is more visionary than most; they start the trends,” stated Karen Jones, co-owner of Gowns by Design of Mechanicsburg, Pa. “For instance, we haven’t seen Mikado silks in a while. And its broad range of pricing attracts a diverse customer base. Our brides are mid- to late 20s up to about 38, and in our area, weddings tend to be destination or out-of-doors, so big ballgowns and trains are not for us.”

Added her daughter Jennifer Martin: “The spectrum of the collection is huge, pulling elements from all those 50 years. Everything has to transition at a certain pace. Pronovias is always fresh, never stale. [The product] is something you can get excited about — and in general it’s a better investment because the gowns have a longer shelf life.”

President and owner Alberto Palatchi pointed out the runway dresses, all from the upscale Atelier line, are made in Spain. “We’re doing lots of things here including remodeling the retail structure because the domestic economy is coming back,” he declared.

A second flagship of roughly the same size in a five-story 1912 building will bow in October in Seville, Palatchi confirmed.

It’s all part of an aggressive global strategy to increase market share by doubling sales in five years, said chief executive officer Manuel Ehrensperger. “There is space to grow at the retail level, especially in major European capitals and key markets like the U.S. and Canada, Brazil, Mexico — and in Spain, too, where we have close to 100 stores,” he said. Asia is “a region we are looking into, especially China,” he added.

The city’s bridal shows began May 6 and ran through Friday, covering 22 collections overall.