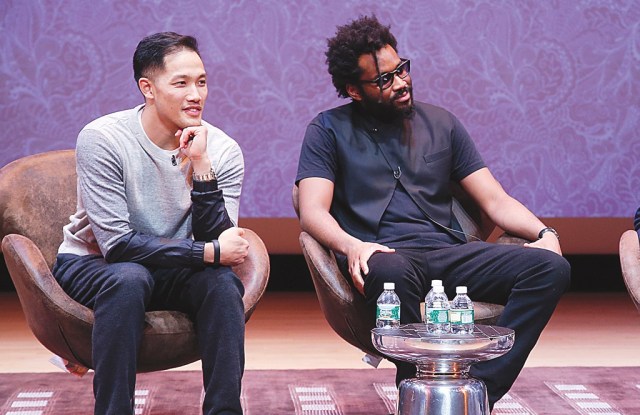 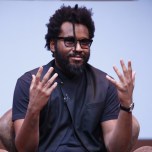 It’s the golden word in fashion these days — streetwear, a term that has been resurrected to become men’s wear’s newest trend. Among the standout designers in the category are Dao-Yi Chow and Maxwell Osborne of Public School, a label that blends high and low sensibilities, merging a street point of view with high fashion.

“It’s all about convergence,” Chow said of their inspiration. “We play with proportions, shapes and things, mixing and matching from fashion, music and art, and pop culture in general. All those things make up the Public School guy.”

The two New Yorkers — Chow born in Queens and Osborne from Brooklyn — have, in the past year, gained traction and a new respect from the fashion industry. And they have been recognized for that: Public School took home the CFDA/Vogue Fashion Fund’s top honor last November, and were nominated for the CFDA Swarovski Award for Menswear.

“Streetwear is such a hot topic right now, but to us it’s really inherent in who we are and collectively our passion for New York City as our foundation,” said Chow. “But the reference point is street as opposed to streetwear. There’s so many things that inform what streetwear is, and it lies outside of fashion to all these countercultures, from skateboarding to punk and now hip-hop. We’re heavily influenced by all those things.”

The two designers met while working at Sean John nine years ago. Chow had become the vice president of marketing in 2011, while Osborne was an intern who was eager to please. They formed a friendship and discovered that they shared the same eye for fashion.

“Just talking to each other, we found a void in the market of what was missing,” Osborne recalled.

Both designers said that working alongside Sean “Puff Daddy” Combs was an experience that opened their eyes to what was happening in men’s fashion. “Puff was really onto something then, taking street references and luxury and combining those two things,” said Osborne. “That rubbed off on us.”

In 2005, Chow started a private-label line in Miami Beach, which was the forerunner of Public School. The private label did not stick, but the new label did, making its debut in 2008.

After being accepted into the CFDA’s incubator program in 2010, the two decided to shut down their business. The break is what was needed, they said, to refocus and reinvigorate the brand. Their business relaunched in 2012, but the business was still struggling.

“I’m married and have two sons who are along for the ride,” said Chow. “You have all these people you bring in and vendors who you work with and patternmakers and cutting rooms. All these people are betting on you to make it.”

And before the two were nominated for the CFDA Award, they were thinking about quitting the business altogether.

“Had things not happened the way they’re turning out to be, we could be back to designing for someone else and getting a 9-to-5 gig,” Chow said.

It was only up until early last year that the two felt their business had a chance of continuing.

“Being nominated for the Swarovski Award around this time a year ago was bigger than winning that award because you’re onstage to be nominated and honored,” said Osborne. “Being nominated was really great because you knew there was a future for it. Win or lose you’d be back next season.”

Today, the brand is sold in Bloomingdale’s, Barneys New York, Saks Fifth Avenue and internationally in retailers such as Harvey Nichols.

“Our guy is the New York guy who is the connector of the world,” said Osborne. “He’s strong, he knows his fashion, he loves his details with fabric and fit.”

“We infuse tailoring with an active lifestyle to our guy who isn’t wearing a suit and tie every day,” said Chow. “Or he doesn’t change at all, and starts out the day and progresses until the evening in the same look.”

As for the future, Osborne said that he and Chow have a five- and 10-year plan for the business.

“We launched women’s during [New York] Fashion Week,” said Osborne. “We’re going to see a lot of growth there. We’re focusing on growth internationally too now, and licensing and seeing where our brand is going.”

Chow added, “There’s a focus on home and domestic first, and then international. We’re in London, Tokyo and Hong Kong and just scratching the surface with that. We want our retail to be 50-50 with our wholesale business. And then e-commerce as well.”

Over the years, the two have been fortunate to have had mentors in various fields. When it comes to business, they turn to Rodrigo Bazan, the head of Alexander Wang. “He’s the [president] of Alexander Wang but might as well be the [president] of Public School,” said Chow, laughing. “Don’t tell Alex that. We see him every week and weekend. He calls us more than we call him. He’s like, ‘Guys, I haven’t heard from you.’ ”

Added Osborne: “Everyone has a helping hand in this, which makes our story cool. When we win, all these people who are vested in it feel like they win, too.”

As for their challenges, Osborne said it’s their infrastructure they are most focused on for the future. “We are growing faster than we can find people, in terms of our staff.”

“We’ve grown a bit in the past year,” said Chow. “We went from Max and I going to every inspection to picking and packing literally every single thing, to now having to manage that piece and hire the proper people to work with us.”

Though they are fashion’s Cinderella story, the two maintain they are still working hard to stay afloat.

“People think we started just last year, but in reality we’ve been doing it since 2008,” Chow said. “We are fortunate and honored to take this all in. To all of our retail partners: We don’t take it lightly.”