The designer retains a 40 percent stake in the company he founded in 1982.

By Miles Socha and Jennifer Weil on May 3, 2011
View Slideshow 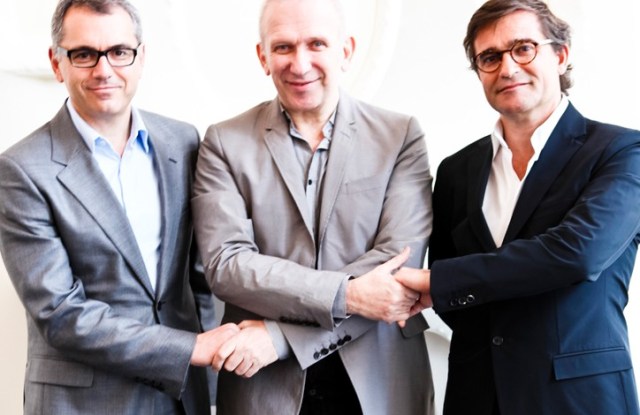 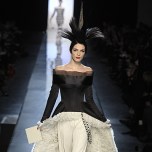 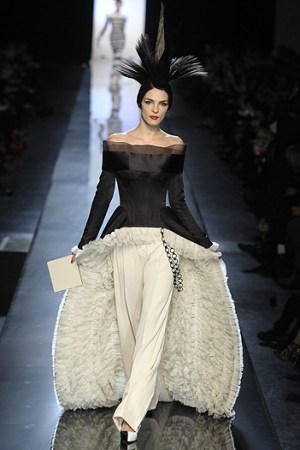 PARIS — “Twelve points for Spain,” Jean Paul Gaultier, who is crazy about the annual Eurovision Song Contest, enthused on Tuesday, awarding the maximum appreciation to Puig, the new majority owner of his Parisian fashion house.

The Barcelona-based beauty and fashion firm purchased the 45 percent of Gaultier held by Hermès International and roughly 15 percent from the founding couturier, giving the ebullient designer a new lease on life and making Puig — parent of Nina Ricci, Carolina Herrera and Paco Rabanne — a bigger and more formidable player on the international fashion scene.

WWD first reported Puig was in exclusive negotiations to acquire Gaultier on April 5.

“I am thrilled,” Gaultier told WWD. “They’re nice people; they have a lot of energy. It’s a family business. They know what they want to achieve and they are buying Gaultier for Gaultier, not to turn it into something else.”

The designer, who retains a 40 percent stake in the company he founded in 1982, did not disclose financial terms of the transaction.

Manuel Puig, vice chairman of Puig and president of Nina Ricci, said he also would take on the president’s title at Gaultier, which the designer plans to relinquish in order to focus on designing couture and ready-to-wear collections.

Puig, who relocated to Paris three years ago and orchestrated a hands-on turnaround at Ricci, said he spied “big potential” for Gaultier, whose creative expression spans from sophisticated high fashions to edgy streetwear.

The deal represents a complete divorce from Hermès, which had been an unlikely business partner for the madcap designer, famous for his irreverent approach to fashion and such outré inventions as skirts for men and Madonna’s now-iconic cone bustiers for her “Blond Ambition” tour.

In 2004, family-controlled Hermès tapped Gaultier to succeed Martin Margiela as its designer of women’s rtw, a collaboration that wound down last year with the appointment of his successor, Christophe Lemaire.

On Tuesday, Gaultier said he would part ways with the maker of Birkin bags and silk scarves with fond memories.

“I had a great experience with Hermès over almost 13 years, quite fantastic actually, especially the years with Monsieur Dumas,” Gaultier said, referring to the charismatic former Hermès chief executive officer Jean-Louis Dumas, who died last year and had been a keen champion of Gaultier. “I loved it, and I did it by choice, not by obligation. I only function like that.”

The designer, 59, likened business partnerships to love affairs. “Sometimes it goes on until you die, and sometimes you find a new love,” he said. “It’s a good thing…to move on to a new adventure.”

Patrick Albaladejo, deputy chief executive officer at Hermès, also described an amicable parting, giving Gaultier a chance to focus on his own brand, and Hermès to devote management attention to its own growth vectors, such as the home category, and subsidiaries including luxury shoemaker John Lobb.

“He really wants to change gears and drive his house to a new dimension,” Albaladejo said. “Jean Paul has contributed a lot in the area of ready-to-wear obviously, and he’s also been a loyal friend of Hermès at all times.”

The designer, whose summer couture collection in January was highly praised, can now devote his full attention to his signature lines, which span collections for men, women and children, along with a rotating bouquet of collaborations. Current projects include a second collection for Italian lingerie specialist La Perla.

During couture week in July, the designer said he would unveil a new men’s fragrance.

Gaultier’s business has long been based on licensing, including deals with Italy’s Aeffe SpA for his women’s collection and Fuzzi for knits and beachwear.

Sources indicated Gaultier logged an increase in sales and losses narrowed in 2010. Aeffe recently said 2010 sales of the line edged down in the low double-digits.

Meanwhile, losing the cash-cow Gaultier fragrance business is widely seen as a blow to BPI, which is said to have partnered with Asian fund Fung Capital in an 11th-hour attempt to upset the Puig discussions and wrest control of Gaultier. Inter Parfums SA had also expressed interest in bidding.

According to a Paris source, fragrances represent more than 80 percent of the Gaultier business, if one considers the wholesale value of all products.

BPI has been Gaultier’s fragrance partner since 1990. In 1993, Gaultier launched the women’s Classique scent, which was followed in 1995 by Le Mâle, which is sold in a torso-shaped bottle dressed in Gaultier’s signature sailor stripes and remains a top-selling men’s scent. In 2008, Gaultier introduced Ma Dame, a feminine scent. Other additions over the years have included the Power of Two and Fragile.

In a brief statement Tuesday, BPI said the change in shareholding would not alter its existing launch plan for the Gaultier brand, and that it would continue to develop and enlarge its brand portfolio, currently composed of Parfums Issey Miyake, Parfums Narciso Rodriguez and, most recently, Elie Saab.

Over the past decade, many beauty giants have shed fashion businesses, with L’Oréal off-loading Lanvin in 2001 to Taiwanese publishing magnate Shaw-Lan Wang and Procter & Gamble Co. shuttering Rochas in 2006, later licensing the name to Italy’s Gibò Co. SpA. Groupe Clarins only recently reactivated the Thierry Mugler fashion business, now called Mugler, having previously wound it down in 2002.

By contrast, privately held Puig has been building up its fashion muscles.

Puig now controls 7 percent of the global prestige perfume business, up from 3.7 percent in 2005. Rabanne has been a key driver thanks to the men’s scent 1 Million, launched in 2008 and followed up last year with a successful feminine counterpart, Lady Million. Rabanne is reactivating its fashion activity, and this fall will stage a runway show for the first rtw collection designed by new creative director Manish Arora.

International sales now account for 75 percent of Puig’s revenues versus 62 percent five years ago. The company, marking its centennial year in 2014, distributes its products in more than 130 countries.

Gaultier is no slouch on the global fashion stage. This June, he will travel to Montreal to unveil a retrospective of his 35-year career at The Montreal Museum of Fine Arts. And he’s also at work on stage costumes for Dana International, who will compete for the next Eurovision prize on May 14. Considered one of the most famous transsexual performers in Europe, she won the contest in 1998 with her song “Diva.”