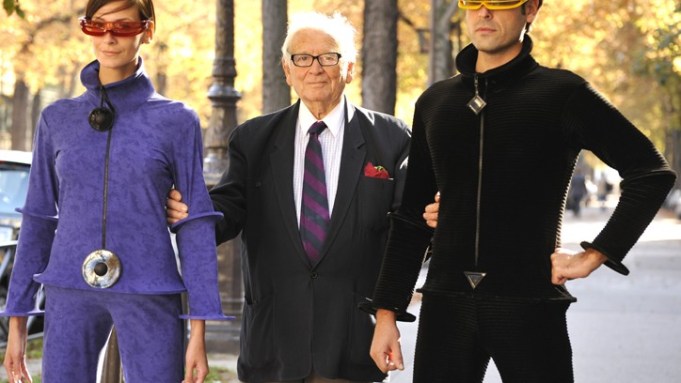 PARIS — Pierre Cardin celebrates the 60th anniversary of his label today with his first Paris catwalk show in a decade.

Just don’t expect him to raid the archives.

The pioneer of Space Age fashion — who can churn out 100 sketches an hour — is determined to show he can still break the rules at 88.

Here, Cardin speaks with WWD about his comeback, Lady Gaga and why his licensees drive him to desperation.

WWD: What can we expect to see at your anniversary show?

Pierre Cardin: They are all original creations. I am going to show a new men’s and women’s collection, and there are obviously some very provocative things which are very innovative, alongside designs that are more commercial. But what is important for me is to show my innovation.


WWD: What inspired you for your return to the Paris catwalk?

P.C.: Showing that the brand still exists as a creative force — that’s what drives me. And I notice that what I do early on becomes commercial some 15 or 20 years later. I’m always ahead of the curve.


WWD: Lady Gaga wore one of your dresses for a video shoot. Are you pleased?

P.C.: Yes, of course. Back in the day, I dressed the Beatles and the Rolling Stones. I have always designed very provocative clothes for young people.

WWD: Why did you decide to return to the Espace Cardin after staging spectacular displays in the Gobi desert or the Palais Bulles on the French Riviera?

P.C.: When I started showing at the Espace Cardin, people did not show in theaters. You showed in salons with gilded chairs. I was the first to show in outside venues. It was considered provocative at the time, although you see what has happened since. This is my space, and the large conference room allows me to present my designs without artifice. It’s very pure, very simple, white and clean, and it puts the spotlight on the clothes. I want to highlight my collection, not do something theatrical.

WWD: Do you still have a lot of demand for couture?

P.C.: Our clients are very elegant and very faithful. The global clientele for haute couture has declined, but I must have around 100 customers a year who buy three, four, five or six dresses at a time. They are very discreet women who want to remain out of the spotlight. We don’t sell ready-to-wear here [at the flagship Paris boutique located at 27 Avenue de Marigny]. Everything you see in the windows is haute couture, and the dresses are made in our atelier here. I have some 80 seamstresses working for me, including around 50 in my factory in Châteaurenard, which acts as an extension of the atelier here because I don’t have enough space. Given my age, a lot of them have been with me for at least 30 years. I don’t produce seasonal collections, because as you can see, I sketch very quickly. I can do 100 sketches per hour!

WWD: You also plan to stage a show in New York in October. Why?

P.C.: My aim is to boost my sales in the U.S. and to raise my profile among young people. Since I don’t get a lot of press coverage, young people don’t know who I am. I want to show them I am still avant-garde and that I produce original designs, and I also want to help my licensees, who rely on my creativity, after all. Unfortunately, they produce very classic outfits for men. I wish they picked up my designs. Instead, they produce this fusty, bourgeois stuff. It drives me to desperation, because I bring them my original designs to copy. That is the purpose of their licenses. I don’t know why, they just won’t do it. We really need someone to drum up new licenses there. They could make a killing, because my designs are very youthful. All you see is these old Hart Schaffner Marx suits for old men. It makes me ashamed to even look at them. We haven’t made much of an effort there, I have to admit it’s partly my fault. Business is strong; it’s not a small country. I make a lot of money, but not as much as I should. It’s not about making money, of course, but about having a presence. I am ambitious, you understand.”


WWD: Have you ever considered hiring a young designer to revitalize your brand?

P.C.: No, because I have five people sketching for me who are very young. And I think the young designers of today are less avant-garde than I am. I’m still in good shape, I work every day.

WWD: How do you feel about being awarded Fashion Group International’s Board of Directors Legend Award next month?

P.C.: I am very happy. At the start of my career, I spent a month crisscrossing the U.S. on behalf of Fashion Group. I was the one who did the first fashion shows in all the big department stores, in 1955 or 1956.

WWD: So, in a way, you are coming full circle.

P.C.: I have not come full circle. I have to start all over again!