Larry Leight turns his creative focus to retro chic and the resurgence of intellectual style. 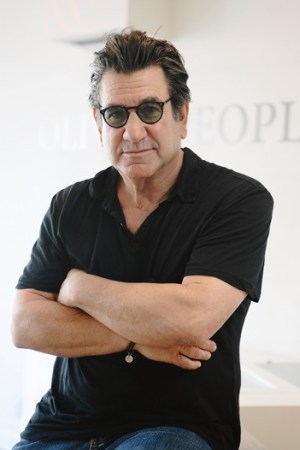 Larry Leight: He was someone with an amazing collection of American-made frames that were never worn; we assume he was a distributor. These frames had been in storage for 30 years. There were 4,000 or 5,000 frames, clip-ons, lenses—all handmade in the USA—as well as tools, brochures and documents with the name Oliver Peoples. I went to a liquidator’s warehouse in Connecticut and wrote a check for about $5,000 for the whole thing.

Menswear: What drew you to this business?

L.L.: I was born and raised in Los Angeles, and after high school I became an optician. But I found that my real love was styling. I wanted to make people look better in their eyewear.

Menswear: Your brand seems to have a strong association with movies and celebrities.

L.L.: That wasn’t planned at all. We simply opened a flagship store on Sunset Boulevard, in West Hollywood, in 1987. That opened up a whole new world. The first big thrill was when Elton John came into the store—he bought something like 50 pairs.

Menswear: What was your most effective product placement?

L.L.: American Psycho. It wasn’t a blockbuster, but business and fashion people were really taken with that movie. Christian Bale wears the O’Malley. It’s even mentioned in the book.

Menswear: Who are the great eyewear icons?

L.L.: For men, it’s Andy Warhol. He wore several styles, all very artistic. And today it’s Johnny Depp—he rotates between a couple of frames—and Jay-Z, who wears our Daddy B sunglasses. There’s also a movie about Vidal Sassoon coming out, in which he wears one of our styles—big, heavy plastic frames, like the ones worn by Aristotle Onassis. It makes a strong statement.

Menswear: How has all this attention affected your growth?

L.L.: We started with one frame and quickly grew faster than we could manufacture them. But we didn’t want to lose our exclusivity, so we chose stores very carefully. We planted a seed in the best stores in Japan, Italy, Germany, France and the U.S. We’re now in over 60 countries, but still really exclusive.

Menswear: The retro eyewear styles you introduced when you started your company in 1986—the round frames from the Fifties—were all over the 2010 runways. Did you see this coming?

L.L.: We did. We knew from experience that things come back around, and before our anniversary a few years ago, we took another look at those frames. But people were still wearing big Eighties-style frames; the time didn’t feel right. Then the recession hit and suddenly there was a vintage buzz, not just in eyewear but also in watches. So now we’re reintroducing three of our iconic frames. They’re more of an intellectual style—something John Lennon or Andy Warhol would wear. They’ll be in the stores in January or February.

Menswear: It has been reported that one of those frames, the O’Malley, was selling at a rate of 20,000 pairs a year. Why did you discontinue it?

L.L.: The O’Malley is true vintage—it’s a little bit droopy, not tailored. We decided to design a frame called the Riley, which was retro but updated. But now the O’Malley feels right again. It’s OK to be a little funky.

Menswear: LASIK eye surgery is increasingly popular. Does that make you nervous?

L.L.: It did make me nervous several years ago. At the rate it was going, I began to wonder if one day, maybe 100 years from now, people would look back at eyewear as a strange apparatus from a distant past. But you can’t be sure about the future. Laser surgery is expensive—young people, who create trends, probably can’t afford it—and you still see many models and actors wearing stylish glasses. Now, even the people who’ve had laser surgery want glasses. So I’ve calmed down about it.