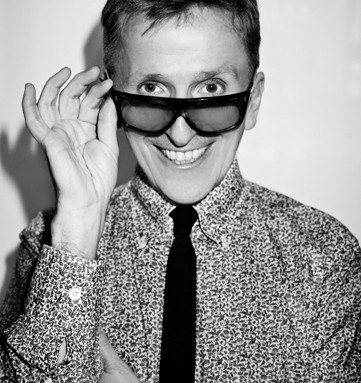 His varied 30-year career has included supervising installations for Diana Vreeland at the Metropolitan Museum of Art’s Costume Institute and designing the art-gallery-scene set in the movie “Beverly Hills Cop.” However, Doonan may be best known for his irreverent Barneys windows that have mocked iconic personalities from Margaret Thatcher to Madonna.

“I have utilized the windows to create buzz, comment on pop culture, provoke people, mock celebrities and caricature and celebrate the dramatis personae of art and fashion and entertainment,” he said.

The story of Doonan’s childhood in working-class Reading, England, and his eccentric family is the subject of the British television show “Beautiful People,” which made its premiere in the U.S. on the Logo network in May and is based on his memoir “Nasty: My Family and Other Glamorous Varmints.”

WWD: With luxury spending down, what is your marketing strategy to stimulate purchasing for fall?
Simon Doonan: The era of lavish trend following is dead. For our customers, fashion is about personal expression. During this tough period, we are more than ever encouraging our customers to think of self-adornment as a creative exercise.

Our top customers are connoisseurs of Dries, Alaïa, Margiela, et al., and are as obsessed with the craft and design of fashion as we are. When they shop at Barneys, we want them to see it as an act of self-expression. We want them to curate their closets to reflect their idiosyncratic personalities.

WWD: How do consumers’ buying patterns differ now compared to this time last year?
S.D.: Our customers are still shopping. Their spending is more restrained. It’s now a two-pairs-of-Blahniks-instead-of-five kind of a thing. But it’s creeping back; by fall, it will be three-and-a-half pairs.

WWD: Regarding Barneys’ [October] opening in Scottsdale, Ariz., how can a New York-centric store successfully market and appeal to customers outside of New York?
S.D.: I am already spending time in Scottsdale, getting to know the locals and loving it. In March, I hosted a lunch for 600 women and did my best to tap-dance and lap-dance my way into their hearts.

I think the future of fashion lies in the hands of the consumer. All the press, art direction, hype and red-carpet celebs do not amount to anything at the end of the day if the customer is not on board. When Anna Wintour announced “Fashion’s Night Out,” I let out a loud cheer. Ms. Wintour is smart enough to understand it’s time to swing the spotlight away from the front-row celebs and back into the fitting room. The customer is king…or queen.

WWD: Barneys’ windows are well-known for their whimsy, but how do you still make that work in a time of consumer hardship?
S.D.: My windows were never about chandelier opulence. My job is to create desire, and I have always tried to accomplish that by being communicative, eccentric and intriguing, rather than flashy or lavish. Our funkier, more crafty style of display is much more recession-proof than the typical “bling and chinchilla” kind of approach. I feel we are in sync with the times.

WWD: Why don’t more retailers use wit and humor to shape their image?
S.D.: We attached ourselves to the idea of taste, luxury and humor decades ago. It’s a winning combination for us and a major point of differentiation. I have no idea why other luxury retailers did not figure it out. Maybe it’s because we already sank our claws into the humor thing and they do not want to appear to be copying. Either way, I am…more committed to the concept of humor than ever. Why should fashion be a dismal, masochistic thing? When you spend your hard-earned shekels on gorgeous garments, you deserve to feel joyful and euphoric. It should be transformative.

WWD: Have current financial challenges and the lack of a chief executive officer affected Barneys’ marketing plans?
S.D.: Of course they have. It’s been a colossal drag. But we are a very resilient organization with a very supportive parent company and so many geniuses and sages in key positions. People like Tom Kalenderian, Judy Collinson, Dawn Brown, Julie Gilhart, Dave New. These folks are just the tip of the iceberg. We also have a brand-new team working on our advertising creative, headed by Lina Kutsovskaya, formerly of Teen Vogue and Nylon, and Lina is upholding the great tradition of provocative and intriguing advertising, which is just as much a part of the Barneys image as the windows. She just showed me lots of contact sheets for fall, and my knuckles went white…in a good way.

WWD: What will be the themes of your next holiday marketing programs and windows?
S.D.: By the time the holidays roll around, I think we will all be in dire need of a chuckle. The time is right for “A Witty Holiday.” I am still refining the concept, but my mind is racing from Dorothy Parker to Phyllis Diller and back again, with maybe a dollop of Oscar Wilde and Tina Fey thrown in for good measure.

WWD: When do you think customers may return to paying full price?
S.D.: Our top customers are still happy to pay full price to get their dibs on next season’s Lanvins and Balenciagas. But there is a broader tier of customers who know the fashion system is slightly insane, and that spring-summer gets marked down at the beginning of June.

Why wouldn’t they wait? I am not sure what the answer is. As the economy recovers, I think we will see this problem begin to retreat. And if it doesn’t, I am going to throw myself in the East River.