The most luxurious company you’ve never heard of. 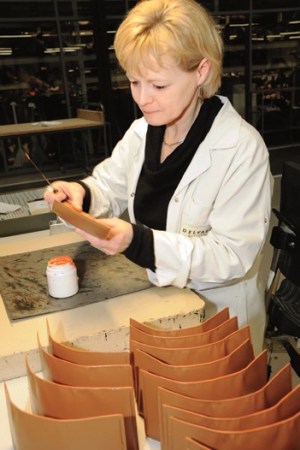 You’ve heard of Hermès, Vuitton, Prada—but how about Delvaux?

Having weathered the recession and the blingy fashion bag craze of the late Nineties, this luxury Belgian leather goods brand is expanding outside its home turf. A family-owned house that claims to be the world’s oldest leather goods company, founded in 1829 as a maker of  trunks and travel goods has 16 stores across Belgium, and recently began establishing exclusive partnerships with world-class retailers—I.T. in China, Maria Luisa in Hong Kong, 10 Corso Como Seoul in Korea and Barneys New York in the U.S. Deals with Le Bon Marché in Paris and 10 Corso Como in Milan are set for fall, and more flagships in key cities are in the works, too.

The house’s iconic Brillant, launched in 1958 and still made using the inside-out passepoil technique, represents around 10 hours of skilled work. Featuring 24-karat gold-plated brass hardware, including a signature D-shaped buckle, the Brillant is part of the Heritage Four concept designed to introduce new customers to the brand’s DNA. The four also include updated versions of the Tempête (from 1967), Le Pin (1972) and the Givry (1977). New designs headed to the U.S. for fall include the Trompe L’Oeil (a spin-off of the Brillant), the Signature and Heure Exquise.

Each model carries a serial-numbered card signed by its lead craftsman.  Retail prices for handbags range from $1,690 for the Le Pin model in polo leather to $15,000 and up for models in exotic skins.

Specializing in handcrafted, limited editions, Delvaux produces 15,000 handbags a year in its  Brussels headquarters, the Arsenal, built at the turn of the 20th century as a repair depot for military vehicles. An impressive red brick and cast-iron structure boasting a central glass atrium, the site houses Delvaux’s creative studio, technical department and atelier, a museum and vast glass-walled leather library stocked with rolls of antique skins. The site’s customer service department restores and reconditions around 500 bags a month.

The house can be compared to a niche jeweler or Swiss watchmaker with limited capacity, such is the rarity of its product. Only three people in the company can make the technically complex Brillant bag, for instance.

Innovation and design have always been central to Delvaux’s heritage. Franz Schwennicke, who in 1933 took over the company from Edmond Delvaux, the last of the founding family, adapted the collections to the rhythms of Paris couturiers—considered a bold move at the time. Franz’s wife, Baroness Solange Schwennicke, who became chief executive officer upon his death, in the Eighties helped promising fashion student Martin Margiela make a bag for a collection he presented for the Golden Spindle competition.

In March 2010, the house staged a fashion show in Paris for the first full-fledged collection from artistic director Veronique Branquinho. Christian Salez, ceo, saluted Branquinho for extending her avant-garde vision to Delvaux while respecting its legacy of elegance. Despite being discreet and low-profile, Studio Delvaux has collaborated since 2008 with local star model Hannelore Knuts.

“Hannelore is quite androgynous, [with a style one wouldn’t typically associate] with bourgeois Belgian society,” says Salez, noting that, alongside its classic customer, recently Delvaux has started to attract artsy intellectuals and a younger clientele, perhaps influenced by the vintage craze.

Because Delvaux produces in such limited runs, don’t expect the bags to be draped on shoulders the world over so fast.  Despite gaining the new fan base, Salez says the house has to take care not to expand too quickly.

“We have just celebrated our 180th anniversary,” he says, “so we are in no hurry.”