A look from the R.Swiader fall '19 collection.

Raf Swiader was frustrated with the path most emerging designers were taking to launch a brand. So he created his own lane.

Since moving to New York from Poland in 1998 to pursue a fashion career, Swiader had followed the rules: get a degree from the Fashion Institute of Technology and land a design job — in his case designing women’s clothes for Olga Kapustina. After a decade of paying his dues on Seventh Avenue, he moved to Los Angeles to manage John Varvatos’ flagship. It was during that time he finally decided to fulfill his lifelong dream and launch his own brand.

His men’s label R.Swiader was intended “to feel classic in a nontraditional way. I can wear it in Paris, New York, Tokyo and feel comfortable wearing these designs in any city,” he said. He quickly found fans in everyone from Boy George, Evan Peterson and the guys from Pentatonix to Daniel Gillies and Trè Cool who were drawn to the collection’s classic lines and graphic shapes.

Swiader moved back to New York to focus on his own line exclusively, showing it for two seasons during New York Fashion Week: Men’s. In order to sustain a wholesale-based business, he had to keep the price points high and negotiate his way into boutiques that had the customer base to successfully sell the collection. 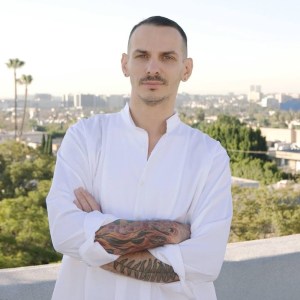 It was working, but it wasn’t satisfying. So in 2017, he and his husband, photographer John Arsenault, opened a retail store called Mott NYC in Little Italy. The shop showcases the entire R.Swiader collection and has a three-chair barber shop in the rear where Arsenault and other stylists cut hair. The shop also offers what Swiader describes as “favorite things for your life.”

“It’s an extension of our home,” he said, pointing to the small leather goods, books, dishcloths, deodorant and candles that are among the latest designs he has created. The shop hosts mediation sessions and other activations that bridge the gap between fashion and life.

“We’ve built a community by creating a cool space rather than one that just pushes product,” he said.

Next up for Swiader is the launch of his first women’s collection. It will make its debut for fall 2020 and he expects to show the dual-gender collection during New York Fashion Week in February.

“My background is in women’s wear,” he said. “And my men’s collection is heavily influenced by the shapes, drapes and softness of women’s wear.” In addition, he said a lot of women shop at Mott NYC and buy the smaller sizes of his men’s wear for themselves. 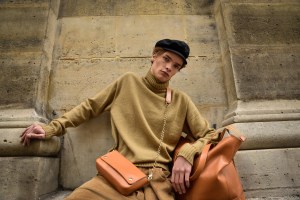 The R.Swiader collection is photographed by the designer’s husband, John Arsenault.

Among his best-selling items are a vintage-inspired farmers’ shirt with a bib popover with top stitching and French seams; pleated canvas trousers with a dropped crotch, and oversize turtleneck and cardigan sweaters. Everything is made in New York except for the sweaters, which are from Los Angeles. Retail prices include $275 for the shirt and $298 for the pants.

Although Swiader didn’t want to tip his hand on what he’s planning to offer for women, it’s safe to assume that the aesthetic will be similar.

The plan is to wholesale women’s wear from the start to both the retailers who carry the men’s collection as well as other like-minded merchants. His hope is that both the men’s and women’s wear will hang in the same space.

“The clothes should be shown together,” he said.