French brand has signed Indian designer Manish Arora as creative director for women’s wear — and that's not all. 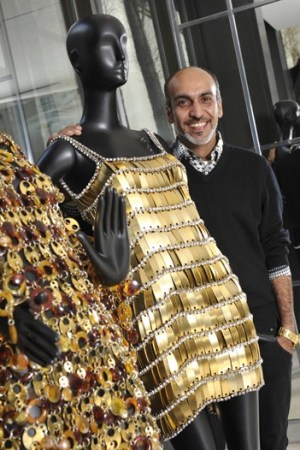 PARIS — Paco Rabanne is ramping up the revival of its fashion business, signing on Indian designer Manish Arora as creative director for women’s wear, WWD has learned.

This story first appeared in the February 4, 2011 issue of WWD. Subscribe Today.

Arora is slated to show his first collection for the French brand, owned by Puig Beauty and Fashion Group, for the spring 2012 season during Paris Fashion Week this fall, in addition to his signature label.

And that’s not all. Rabanne also intends to invite a rotating cast of collaborators for other fashion products under the Paco Lab banner, starting with British designer Judy Blame. In March, Blame will unveil a collection of jewelry and new versions of the brand’s 1969 chain-mail bag, Rabanne’s first new fashion volley since winding down the ready-to-wear business in 2006.

Nine versions of the iconic style with a toilet-flush-chain handle are arriving at 25 select specialty stores, including 10 doors of Comme des Garçons, which also handled distribution. Prices range from 750 euros, or $1,035 at current exchange, for ones in aluminum, Plexiglas or rubber to 1,650 euros, or $2,280, for styles in steel, natural horn or stingray.

“I think people are looking for brands with great heritage — and stories to tell,” said Vincent Thilloy, vice president in charge of Rabanne’s fragrance, fashion and accessories businesses. “It’s a perfect time to come back.”

It also coincides with an explosive moment for Rabanne’s fragrance business, headlined by the 1 Million men’s scent, its sister fragrance, Lady Million and the Black XS range.

Fashion, however, will be the focus in 2011, and Thilloy and Albesa trumpeted parallels between the house founder, who famously launched his Space Age brand in 1966 with a collection titled 12 Experimental and Unwearable Dresses in Contemporary Materials, and Arora, whose kooky and colorful creations are certainly of Rabanne’s otherworldly ilk.

He has shown dresses resembling forbidding armor one season; a colorful merry-go-round the next. Photo prints, 3-D embroideries and unusual materials like foam and vinyl figure in Arora’s daring, sculptural designs, sported by such pop stars as Katy Perry, Rihanna and M.I.A.

Yet, what truly unites the two men is a commitment to craft and innovation.

“It’s very easy to use unorthodox materials, but not to do it with this kind of workmanship,” said Arora, who sells his signature designs online and to about 170 doors worldwide, most of them in India.

The Rabanne executives declined to give sales projections for the rtw launch, but are angling for initial distribution to about 40 to 50 select specialty stores. Retailers carrying the handbags include Barneys New York, Maxfield and Ikram in the U.S.; 10 Corso Como in Milan; Dover Street Market in London and Colette in Paris, which is to showcase them in its windows Feb. 13 to 20.

Thilloy said the house founder is keen to “transmit this brand to a new generation” and capitalize on its lingering resonance — and global notoriety.

“Even in India, we know who Paco Rabanne is,” said Arora, who studied fashion at New Delhi’s National Institute of Fashion Technology and launched his eponymous brand in 1997.