The designer, who steered the French house in a modernist direction, “reached this decision for personal reasons.” 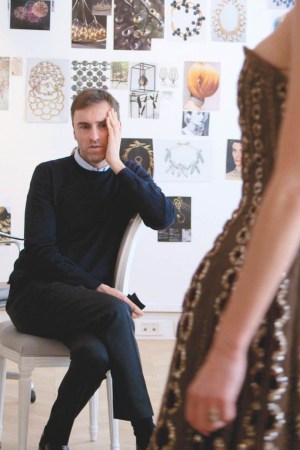 Dior said the designer “reached this decision for personal reasons” and that the spring-summer 2016 collection he presented under a flower-festooned hillock in a courtyard of the Louvre on Oct. 2 was his last.

Simons’ successor at Dior has yet to be identified and a search is to be conducted, according to informed industry sources. They describe the separation as amicable on both sides after the designer and the company failed to reach an agreement on a new employment contract.

The separation announcement, issued after the close of trading on the Paris Bourse, is sure to send shock waves through the industry. It could also trigger another round of musical chairs at the highest levels of international fashion.

“It is after careful and long consideration that I have decided to leave my position as creative director of Christian Dior’s women’s collection,” Simons, 47, said in a statement. “It is a decision based entirely and equally on my desire to focus on other interests in my life, including my own brand, and the passions that drive me outside my work. Christian Dior is an extraordinary company, and it has been an immense privilege to write a few pages of this magnificent book. I want to thank Mr. Bernard Arnault for the trust he has put in me, giving me the incredible opportunity to work at this beautiful house surrounded by the most amazing team one could ever dream of. I have also had the chance over the last few years to benefit from the leadership of Sidney Toledano. His thoughtful, heartfelt and inspired management will also remain as one of the most important experiences of my professional career.”

For their part, Arnault, chairman and chief executive officer of LVMH Moët Hennessy Louis Vuitton and Christian Dior SA, and Toledano, ceo of Christian Dior Couture, said they “acknowledge Raf Simons’ decision and very warmly thank him for his exceptional contribution to the house.”

None of the three men commented beyond the one-page statement.

This marks the second surprise designer exit at Dior in recent years, following the 2011 expulsion of John Galliano after his anti-Semitic outbursts at a Paris café, for which he was convicted of public insult.

Dior rebounded unscathed from that shock and would go on to post strong sales growth in the post-Galliano period, with his second-in-command Bill Gaytten taking the reins and turning out ladylike, Fifties-inflected elegance until Simons was recruited in April 2012. (Galliano went on to become creative director of Maison Margiela in 2014.)

The development also suggests that designers of Simons’ generation are not willing to bend unthinkingly to the demands — and constraints — of today’s mammoth global brands, as Hedi Slimane’s decision to relocate Saint Laurent’s design studios to L.A., and Phoebe Philo’s insistence that Céline’s be shifted to London, attest.

“I’m questioning a lot,” Simons said just before Dior’s Oct. 2 show, referring to the now palpable sense that the pace of fashion and the overheated runway system has reached a volatile tipping point. “I feel a lot of people are questioning. We have a lot of conversation about it: Where is it going? It’s not only the clothes. It’s the clothes, it’s everything, the Internet.”

It is understood that creative scope in a sprawling and complex organization, along with Simons’ wish to have a more balanced personal life, were among the divisive issues, rather than any acrimonious event or haggling over compensation. Sources said talks recently reached a stalemate, with “sadness” on both sides that a compromise could not be reached.

Simons’ next move could not immediately be learned, and sources indicated he may be restrained from joining another fashion house for some time due to a non-compete clause in his initial contract — commonplace for senior design posts.

But Simons has his own fashion house specializing in men’s wear, and he is expected to continue showing that collection in Paris.

Given his strong track record at Dior, with the company citing growth in sales of women’s ready-to-wear and an illustrious seven-year stint at the helm of Jil Sander in Milan, Simons is sure to be pressed with offers for his design services.

According to market sources, Calvin Klein may have been among brands that recently made overtures to the Belgian designer, prized for his minimalist leanings, art world connections and bold approach to design.

A popular figure among fashion editors with a ready smile, an approachable disposition and an intellectual bent, Simons often repairs to Antwerp on weekends, roaming its galleries and antique dealers without airs or spectacle.

Simons’ exit will surely spark a fierce guessing game about who might inherit one of the most prestigious fashion posts in Europe, arguably only second in prestige to Chanel, the biggest couture house in Paris.

Riccardo Tisci, Givenchy’s couturier since 2004, is likely to lead the list of possible candidates within the fashion groups controlled by Arnault. Dior recruited Galliano from Givenchy back in 1996, and Tisci has proven his wizardry with couture — and modern communications, using pulse-pounding fashion shows, social media, edgy advertising and his extensive celebrity connections to heat Givenchy to the boiling point.

Dior’s Toledano was among the LVMH brass who attended Tisci’s spring-summer 2016 show, staged exceptionally in New York on Sept. 11 and hailed as an emotional and creative highlight of the international marathon of shows that wound up earlier this month. Tisci has repeatedly expressed his deep attachment to Givenchy, which he has transformed in his image, and LVMH recently stepped up investments in the brand, opening up flagship stores in New York and Milan.

Jonathan Anderson, the 31-year-old director of LVMH’s Loewe since 2014 and a designer in the modernist vein, could also be considered, despite his youth and lack of couture experience.

Dior could also possibly resume discussions with designers it had targeted in the wake of Galliano’s exit, an elite list that includes the likes of Lanvin’s Alber Elbaz and dynamic New York duo Proenza Schouler. Greener, left-field talents like Maxime Simoens is seen as less of a contender than he was in 2012. The French group is also said to admire the work of Valentino’s creative duo, Maria Grazia Chiuri and Pierpaolo Piccioli, despite their seemingly unbreakable attachment to Rome.

It is understood the scope of the Dior job — limited to the women’s universe, and with a grandiose boutique design by American architect Peter Marino considered off-limits to alteration — proved a hindrance to interesting certain candidates during the search in 2011 and 2012, while others were constrained by ownership stakes or iron-tight contracts at their current houses.

Simons emerged as a frontrunner for the Dior job after talks with Marc Jacobs, then creative director at sister company Louis Vuitton, failed to produce a deal. Jacobs is now focused on his own fashion house, which LVMH hopes to ready for an initial public offering.

Sources said Simons did not harbor ambitions to take over the men’s wear at Dior; only wishing that the company’s image as reflected in advertising, boutiques and other communications more closely mirror his collections.

In recent years, Dior has enlarged its network of celebrity faces, unfurling dedicated campaigns featuring Marion Cotillard for the Lady Dior bag, Jennifer Lawrence for the Be Dior and Rihanna for the new Diorama model. Natalie Portman, Charlize Theron and Eva Herzigova are among faces for Dior Parfums.

A self-trained men’s wear maverick, Simons made a name for himself in women’s wear only since he joined Sander in 2005, steering a brand known for purism and sleek tailoring into new territories. He elaborated on the German brand’s aesthetic, adding dresses and eveningwear to its signature tailoring. As if auditioning for a plum post in the French capital, his last three women’s collections at Sander mined midcentury couture for inspiration, and elicited raves.

His swan song at Sander won a standing ovation, opening with a series of roomy coats in makeup shades that the models clutched at their throats, and climaxing with prim cocktail dresses licked with Latex.

While his Dior shows fell shy of the poetry and emotion of his best Sander outings, Simons made a strong case for streamlined sportswear with a suggestion of glamor and a futuristic gloss, parading graphic catsuits and asymmetric coats during couture and astronautlike jumpsuits, flirty pleated miniskirts and cotton sack dresses for ready-to-wear. Recent collections were less reverential to iconic silhouettes such as the Bar jacket.

Simons was Dior’s sixth couturier. Successors to the founder — who ignited post-war Paris with his extravagant, full-skirted New Look, and whose brief career ended with his death in 1957 — also included Yves Saint Laurent, Marc Bohan and Gianfranco Ferré.

During his three years at Dior, Simon was allowed to indulge his predilection for minimalism and futurism, an about-face from the retro-tinged glamour Galliano had plied over a stellar 15-year tenure.

When he was hired in 2012, Dior trumpeted Simons as “one of today’s greatest talents” who would “propel (Dior’s) iconic style into the 21st century.” For his part, Simons had called founder Christian Dior “the most inspiring couturier. Around the globe, the name Dior symbolizes the ultimate in elegance and refinement.”

A darling of critics and editors, prized for his exacting silhouettes and obsession with the here-and-now, Simons brought jolts of excitement to Dior and proved himself capable of theatrical statements, wallpapering a Paris mansion with thousands of fresh-cut flowers for his couture debut in July 2012, and staging fast-paced shows to booming techno in impressive bespoke pavilions constructed in the gardens of the Museé Rodin.

Born in remote Neerpelt, Belgium, Simons moved to Genk and obtained a degree in industrial and furniture design in 1991. Drawn to the energy of the Antwerp Six, who put Belgium on the international fashion map, he segued from furniture into fashion and launched a youth-oriented, street-inspired collection of men’s wear in 1995.

He started showing it in Paris two years later, and quickly caused a sensation with his skinny tailoring, street casting and such imposing runway venues such as La Grande Arche de la Défense.

An enthusiastic fan of contemporary art, Simons shared the label of his fall-winter 2014 collection with Los Angeles-based artist Sterling Ruby in Paris this week for multiple openings in tandem with the Fiac art fair, some events attended by Simons. His men’s collections have also referenced artists including Christopher Wool and Robert Ryman.

Simons wholesales his men’s collection, which spans streetwear, tailoring and accessories, to some 130 doors worldwide. Future developments could include retail stores and an expansion to women’s wear.

Simons had operated two freestanding stores in Tokyo and Osaka with Italian and Japanese partners, but shuttered them in 2011 following a split with his global master licensee. The designer is now the sole owner of his label, which shows in Paris.

Simons received the International Award at the 2014 CFDA Fashion Awards and was a 2011 honoree at Fashion Group International’s Night of the Stars in New York.

Above and beyond Dior and his signature label, Simons has designed fabrics for the Danish fabric firm Kvadrat and collaborated with the likes of Fred Perry, Adidas, Linda Farrow and Eastpak.

The designer exits Dior at a time when the luxury sector is logging smaller gains. Revenues at Christian Dior Couture rose 12.9 percent in its fiscal first quarter, tallying 471 million euros, or $553.4 million at average exchange rates, as reported. In organic terms, stripping out the impact of currency, the improvement in the three months ended Sept. 30 stood at 5 percent.