Raf Simons, creative director at Jil Sander, reflects on the balance between that brand’s minimalist legacy and his own relentless focus on the future. 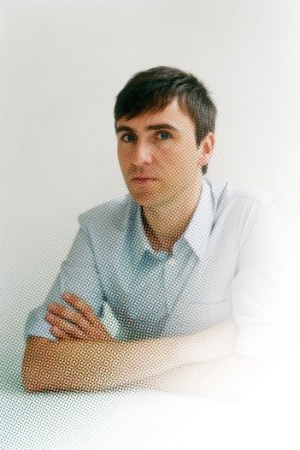 Thanks to his creative directorship at Jil Sander, Raf Simons has become the foremost authority on minimalism, while in a parallel world further from the mainstream, his own futurist label enjoys a fashion-cult following. The minimalist side will take the spotlight at Pitti Uomo this summer in Florence, where the designer is showing the fall collection for Jil Sander.

“The Jil Sander world has always been very controlled, and I’m interested in freeing the brand,” Simons says. “People said, ‘Jil Sander? In Florence?’ That’s exactly why it interests me.”

He’s already revitalized the brand with creative yet appropriate variations on the legacy he inherited, garnering strong reviews and the corporate confidence to extend Jil Sander into new categories and roll out stores.

When Simons arrived in 2005—upon the second retirement of founder Jil Sander from the brand, and in the midst of upheaval under Prada’s ownership—he found a company mired in a 1995 mind-set, but the staff proved thoroughly adaptable. “A lot of people there worked with Jil, and I learn from them every day,” Simons says of his initial plunge into the Jil Sander culture. “At the same time, I felt immediately its limitations and the limited process of thinking that went on before me. It’s OK to have a specific way of doing things, but fashion is not art. You have a responsibility to ask clients what they want, and ask what fashion is today.

“I think it was Jil who did not allow it,” Simons adds. “Everyone had to overcome this. [Fashion in] the 20th century became something else. Once you are responsible for feeding so many mouths, you’d better make sure you listen and concentrate on where fashion is moving to.”

But while Simons relishes bending rules, he is steadfast about one: He will not sit for a portrait, despite the media interest surrounding Pitti. Two extant portraits, both of them years old, are proffered with apologies. Simons isn’t being icy. On the contrary, he loves conversation. He simply loathes being in front of a camera, and if that limits his media opportunities or forces others to live with a hazy mental picture of him, so be it. Besides, when people talk about Simons, mostly they talk about his infl uence.

And that defies easy definition. One approach would be to map the latest runway trends directly to the collections where he introduced them before everyone else. In 2010 alone, we’ve seen boomlets of oversize backpacks, brothel creepers, sleeveless blazers and contrasting sleeves, all of which were cornerstones of his 2008 and 2009 collections. Some would even argue that his skinny suits in the mid-Nineties paved the way for Hedi Slimane’s at Dior Homme, which led to the persistence of slimmer tailoring today. Yet Simons’ greatest contribution to fashion may not be a specific silhouette, accessory or style. It is his will to reinvent.

Simons’ drive to improve upon his surroundings doesn’t seem to stem from displeasure or a critical view. He simply thrives upon the work, having found the work that suits him best.

The designer was born in 1968 in Neerpelt, a Belgian village without a movie theater, record store or gallery. His parents, a career soldier and a house cleaner, sent him to a rigorous Catholic school that mostly shielded him from the arts. When Simons was 16, a Belgian curator placed the work of international artists inside homes in the city of Ghent, on the condition that residents allow the public inside to see them. That first meaningful exposure to the arts world was a revelation to Simons, whose school was pushing him into medicine or law (“my worst nightmare”). Then he came across an architecture book, a pivotal moment. He figured industrial design was the thing, moved to Genk for his degree, and designed furniture for a short period, but found it too isolating and without many prospects.

By that time, the Antwerp Six had stormed the fashion world.

“For sure it had a big impact for a small country,” Simons says. “We are most known for diamonds and chocolates. The success of these designers was a big thing in Belgium. It showed us possibilities.”

Antwerp’s fashion scene drew him in for good at age 25. He interned for Walter Van Beirendonck and found a mentor in the director of fashion at the Royal Academy of Fine Arts, Linda Loppa, who had instructed the Antwerp Six years before. Simons launched a youth-oriented, street-inspired collection under his own name in 1995; started showing it in Paris two years later, and quickly caused a sensation.

That unusually skinny tailoring? He showed it not on agency models but on noodle-thin adolescents. It made a proclamation of youth—but not the overindulged, hyperstimulated youth lifestyle we see glamorized in American media, because that’s not how youth feels to a Catholic school boy in rural Belgium. Simons continuously channeled the true emotional vicissitudes of that age, the ideals and the conflicts. Sometimes it was aggressive, sometimes poetic. In addition to referencing youth subcultures such as Goths, surfers and punks, he sometimes borrowed codes from rebels and other marginal types—even jihadists months before 9/11.

Simons found the design process of fashion suited his collaborative nature, which he attributes to the loneliness he felt growing up as an only child. He became an animal lover as numerous pets filled the absence of siblings. As an adult, he constantly strives for a semblance of family cohesion among his friends and colleagues, he says.

“I’m a very communicative person in my work. I give a lot of freedom to the people I work with. I’m very much a talker,” he says. “This idea of doing it alone is much less attractive than giving it to people and enjoying it together. I never saw fashion as something you do alone. For me, that’s not even possible.”

Simons’ ambitious and slightly sadistic showmanship proved painfully effective. If you received an invitation, which was far from assured, you then had to deal with anxieties about remote locations, late hours, agitated crowds. The more inconvenient, the more intimidating the venue, the more people wanted in. Once inside, there would be a long wait, a glimpse of fashion’s future and finally a longing to see more.

Simons aligned his work with contemporary artists almost from the start, long before the fashion industry’s sizzling affair with that world during the last bull market. He incorporated sculptures and videos into his shows, and was an avid collector and curator on the side.

These merits and more moved Prada SpA to tap Simons for the house of Jil Sander five years ago, after the founder had fled not once but twice. Jil Sander had been a hallmark of the minimalist Nineties, known for uncompromising quality, intensive fabric research and quiet elegance. But it lost relevance in the years of dot-com excess, logomania and “It” bags.

With Simons installed, Prada sold Jil Sander in 2006 to London-based private equity firm Change Capital Partners for an estimated $146 million. Having returned the business to modest profitability, Change Capital in turn sold it to Tokyobased apparel giant Onward Holdings for $244.1 million in 2008. Simons is universally regarded as pivotal to the turnaround.

“I don’t think like I’m the boss. The people in my environment are all on the same level, whether the ceo or the cleaning lady. I talk to them in the same way, and I talk to all of them,” he says. “I answer my own phone.”

Despite the turbulence caused by three different owners in five years, the brand’s viability has mushroomed during Simons’ tenure. It has made strides into eyewear, fragrances, jeans, footwear, jewelry, innerwear and beachwear and a women’s diffusion line called Navy. Simons is not directly involved in Navy, but chief executive officer Alessandro Cremonesi expects it to boost Jil Sander’s turnover of 100 million euros, or about $134 million, by 30 percent in the first year.

Simons is the only men’s designer enjoying such acclaim at two houses simultaneously. He travels weekly between Milan and Antwerp, where he lives alone in a midcentury modern house, and where the design team for Raf Simons is based.

The signature line and the diffusion, Raf by Raf Simons, belong to Milan-based Futurenet via a joint venture agreement with Japan’s Mitsui Group. Production is centralized in Italy. The partners operate two freestanding Raf Simons stores, in Tokyo and Osaka. They aim to add two, in Hong Kong and Beijing, by 2011, and eventually one in New York.

While Simons has obviously impacted Jil Sander, Jil Sander has also affected Raf Simons, sharpening his focus on quality and top-tier fabrics. And Simons has learned to think more commercially without dulling the avant-garde aspect.

“Now I can think, Hmm, that’s something people might understand, and think about doing it in a more commercial way within the collection,” he says. “I know now about [working within] big structure and small structure. I don’t want to say one is better than the other. But I see that in a small structure, it’s difficult to bring out an idea and take the profit financially from it. A big house has so much more possibility to communicate the idea and educate buyers and all that.…I’ve learned to hold ideas back until I think it’s the right time and right structure to bring them out.”

In early 2009, Raf Simons staged a return to classical tailoring, a streak that continued for three seasons. The collections boasted plenty of novelties, as well, but the elegant suits initially delivered a shock to those expecting something more outré.

“People might have thought I rejected tailoring, but I never did. It’s how I started, and I have a constant attraction to going back to something, but still not looking at things in a traditional way,” he says. “A man in a decent suit is fantastic. It makes sense. I see the beauty of it. I see the power of it. I just keep on thinking that I can also show the other possibilities. I don’t want to seem that I’m only interested in breaking men of their restrictions. That’s not an issue, because I don’t see a classical approach as a restriction.” Mindful that his collection started with youthful tailoring, he wants to continue addressing the men who grew up with the 15-year-old label.

Since learning to work with such an established brand as Jil Sander, he has entered Raf Simons into collaborations with Fred Perry, Eastpak and Dr. Martens. Futurenet opened 400 Fred Perry by Raf Simons accounts in 2008.

Another change? Despite holding firm on his resistance to portraiture, Simons has actually grown more comfortable with the more public role he’s had to play since arriving at Jil Sander. “I used to not come out after the show, but now I understand better that it’s nice to do, and it’s also nice for the people who work with me to receive attention,” he says, alluding to his practice of bringing assistants out with him. “I’ve always been shy, all my life. But I also feel pride in my work.”

Some designers pay lip service to modernity while doling out retro-futuristic spaceman clichés. Simons, on the other hand, is truly forward thinking and thought provoking about new ways of relating to the body and addressing realities of life. He never serves up fashion as fantasy or self-aggrandizement. The clothes don’t have to convey power or wealth or importance. They incite desire through sheer novelty and distinction.