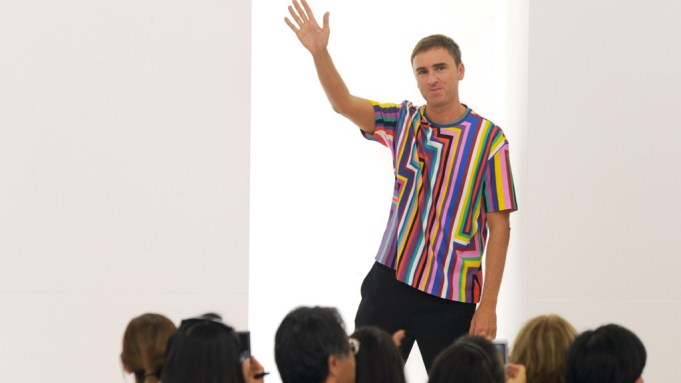 MILAN — The third coming of Jil at Jil Sander is about to happen.

Sources said the fashion house is expected to announce today that its founder, Jil Sander, will return as its creative director. This follows a series of several rapid-fire developments on Thursday in the midst of the Milan shows, when the Sander company and Raf Simons, its creative director since 2005, jointly disclosed they would be parting ways.

The acclaimed Belgian designer is to present his last Sander collection on Saturday, and exit the house effective Monday.

The announcement came after media reports in Germany ignited speculation that Sander, who founded her namesake house in Hamburg in 1968, would return after an eight-year absence.

She was spotted earlier this month at the Première Vision fabric fair in Paris. Sander told a reporter for WWD’s sister publication, WWD Japan, that she was working on a new project she couldn’t talk about, but that it would be revealed during the Milan collections.

The Sander company declined to comment beyond its press statement, which said it would appoint a new creative director “in the next few days.” The company thanked “Simons for his dedicated commitment to the brand, throughout these years, and wishes him the very best for the future.”

In 1999, Sander sold 75 percent of her company to Prada Group, and made a highly publicized exit a year later. Her return in May 2003 was widely welcomed, but she left the company again a short time later. Sander revealed last summer that she would end her stint designing a collection for Uniqlo.

Simons could not be reached for comment Thursday. As reported, the designer had been in discussions late last year with Christian Dior about becoming its sixth couturier and the successor to John Galliano. However, it is understood the parties failed to reach an agreement and it appears unlikely Simons will join the French firm.

Dior had no comment on Thursday, and the house has yet to reveal any plans regarding its creative leadership. The company is enjoying strong business momentum with its design teams under the creative leadership of Bill Gaytten, a longtime Galliano collaborator. Sources said Dior is mulling continuing with a team approach, possibly adding some young, up-and-coming talents.

Simons was in New York during fashion week earlier this month and attended the Narciso Rodriguez and Proenza Schouler shows. “I am on vacation,” he told WWD before Rodriguez’s show, adding that he was going to see friends while in town. He shrugged off questions about his negotiations with Dior.

The prospect of Sander returning to the company that bears her name would surely bring attention to the house.

One retailer said a Sander comeback “would make sense now,” as she will obviously have more freedom compared with when Prada chief executive officer Patrizio Bertelli was in charge, adding, however, that “times have changed so much.” Also, the retailer was doubtful about the commercial success of the Uniqlo project, pointing to large quantities of merchandise left on the shelves.

A men’s wear retailer, who spoke on the condition of anonymity, said the Jil Sander brand’s “knitwear works very well, but the suits’ fit is very slim, so the target is young, and in that range, there are other brands that are not as expensive and that could work as well.” Also, the structure of the accessories collection is incomplete and not developed enough, according to the retailer. In general, the brand’s “quality is wonderful and stylistically very beautiful, but the results are not satisfying. Everything is too expensive, including the Navy line.”

Simons’ collections succeeded in expanding the brand’s target customer, according to a Milan-based retailer, who, however, also lamented the lack of accessories and other licensed products.

Michele Giglio, owner of several Giglio stores in Sicily, said he hasn’t carried Jil Sander since the designer left her company, and added: “Let’s hope she comes back; we all hope she will return.”

Sander stepped down in January 2000 as chairwoman and chief designer of her label five months after Prada bought control of the company. The relationship with Bertelli was strained throughout, as the two, both strong-willed and determined, clashed over creative direction and management of the brand.

In May 2003, the designer returned to her namesake label, only to leave it again the following year over similar issues, and dedicated her time to perusing art in Miami and Basel, Switzerland, and tending to her garden.

Sander’s old fashion house ended up in Japanese hands when Onward Holdings Co. Ltd. bought it in September 2008 from Change Capital Partners. Change Capital had acquired the brand from Prada in February 2006. Simons had been put in place by Prada the previous year.

In March 2009, a partnership with Uniqlo, a unit of Fast Retailing Co. Ltd., marked the designer’s fashion comeback. “The challenge for me is to establish a premium quality in a democratically priced range,” said the designer at the time. Together, they created a brand of well-crafted fast fashion called +J Uniqlo, which launched in October 2009.

In June 2011, Uniqlo parted ways with the German designer with the fall 2011 season. At the time, a spokeswoman for the Hamburg-based Sander said the designer was content with her work with Uniqlo, that the collaboration had run its course, and that the designer had no other projects lined up.

Sander has a reputation for a meticulous attention to detail. Over the course of the partnership, representatives of both sides acknowledged that there were challenges meshing Sander’s exacting standards with Uniqlo’s desire to push for big volumes.

Although Simons received consistently strong reviews for his Sander collections from editors and retailers, it is understood they did not ignite commercially. In 2010, the company revealed plans to launch a lower-priced collection called Jil Sander Navy. The first deliveries were for spring 2011, with an initial focus on the U.S. and Japan.

Simons was adamant that he had “nothing to do” with Navy, which suggested a schism with management over the project.

Former Prada and Vera Wang executive Constance Darrow is said to helm the business unit, with former Helmut Lang designer Christian Niessen among those on the creative team. According to one source, fellow Antwerp designer Veronique Branquinho, who is very close to Simons, was called upon to do shoes for the first Navy collection, without Simons’ knowledge.

A self-trained men’s wear maverick, Simons made a name for himself in women’s wear only since joining Sander, steering a brand known for purism and sleek tailoring into new territories. As if auditioning for a plum post in the French capital, his last three women’s collections have mined midcentury couture for inspiration — and elicited raves.

According to sources, Simons had also been approached by Yves Saint Laurent, which has yet to indicate if it will extend its relationship with Stefano Pilati, who succeeded Tom Ford as the brand’s chief designer in 2004. Pilati’s latest contract is due to expire next month.

Born in remote Neerpelt, Belgium, Simons moved to Genk and obtained a degree in industrial and furniture design in 1991. Drawn to the energy of the Antwerp Six, who put Belgium on the international fashion map, he segued from furniture into fashion and launched a youth-oriented, street-inspired collection of men’s wear in 1995. He started showing it in Paris two years later, and quickly caused a sensation with his skinny tailoring, street casting, and such imposing runway venues as La Grande Arche de la Défense.

In January 2011, Simons split with his Futurenet, which had the master license for Raf Simons. It could not be learned if Simons has since found another backer, although he held shows for his signature men’s wear label both last June and this January.

A darling of critics and editors, prized for his exacting silhouettes and obsession with the here-and-now, Simons shows his signature men’s collection in Paris.

Last year, he took that line back in-house following the split with Italy’s Futurenet Group. Futurenet had held exclusive licensing rights for all Raf Simons labels via a joint venture agreement with Japan’s Mitsui Group, which they inked in 2005.

Simons has hinted at ambitions to launch women’s wear under his signature label.