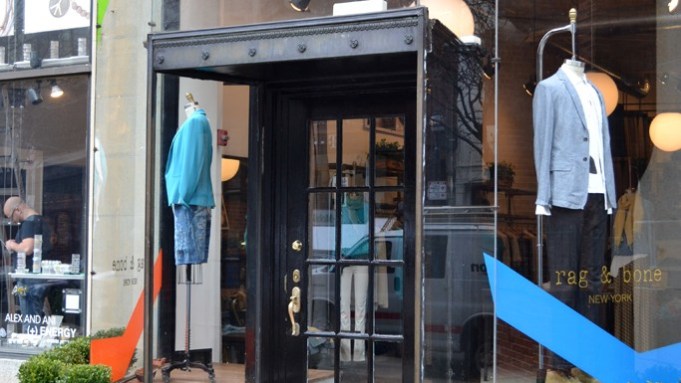 Rag & Bone’s Newbury Street town house — the brand’s seventh global store — is warm and homey, with exposed walls of age-mellowed brick, copper-toned racks and wooden planters of kalanchoe flowers. T-shirts have been folded into neat squares, like paints in a watercolor palette, for splashes of saffron, turquoise and clementine. The space is on the west side of the street, which gets the long afternoon light.

“It feels good to be on the sunny side,” said Neville, the brand’s managing director and designer, who took the lead in supervising the space’s redesign from a former French country furnishings store, which closed last fall. “It’s very like England here [in Boston], so we should do well.”

Newbury Street has seen a huge influx of British brands in recent years, from AllSaints Spitalfields, Jack Wills, Reiss, Ted Baker, Ben Sherman and others. The brand declined to give sales projections, but it’s clear that expanding the retail footprint is a priority.

Rag & Bone is searching for space in Los Angeles, and has already inked deals for stores on New York’s Madison Avenue and in London. Will the U.K. store open in time for the 2012 Olympics in August?

But though Rag & Bone is growing, it’s still a close-knit enough operation that the table Wainwright knocks on for luck is built out of wood meant to be used for a deck on his house. He came into the brand’s Brooklyn warehouse one day and found it turned into a table. The company produces about 70 percent of goods in the U.S. and has no licenses. This fall it will launch a handbag collection, which will be sold exclusively in its own stores and one other partner, likely Barneys New York, in its first season.

Wainwright appeared pleased with the store, albeit sleep-deprived and a little dazed — fittingly, since his youngest child, Kate Rose, was born a few hours before the company’s Feb. 10 fall show.

The Newbury Street space is 2,300 square feet, separated into three floors: street level is the women’s collection, bottom is men’s, and the top is women’s sportswear and shoes. It’s a casual assortment overall, with lots of emphasis on student-friendly skinny jeans ($176), T-shirts ($85) and bouclé sweaters.

About 20 percent of the merchandise is designed only for Rag & Bone stores. In the future, the brand will likely do a Boston exclusive for The Newbury, its best-selling, cuffed ankle boot ($495.)