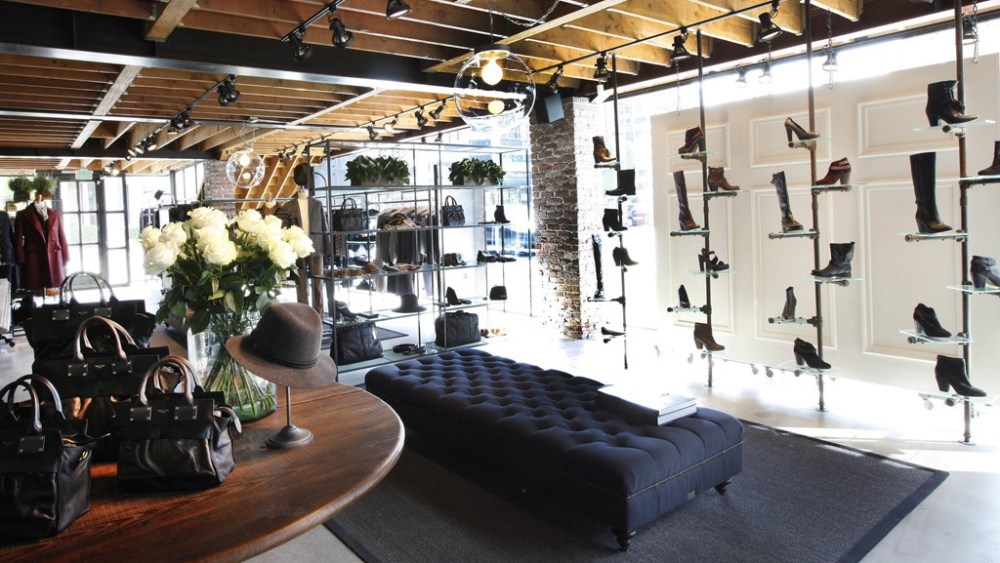 After opening a flagship in London in July, the New York-based brand has planted its first California location on Melrose Avenue in West Hollywood, Calif., that, at 9,000 square feet, is second only to its Madison Avenue outpost in scope. The two-level store and showroom combination marks a crucial inflection point for Rag & Bone as it continues to extend beyond its East Coast comfort zone to put its aesthetic to the test on the West Coast.

“We’ve had a lot of success in our own stores since we opened our store on Christopher Street in 2008. Initially, our strategy was to open stores in Manhattan, then in Boston and Georgetown because we felt like we could control and manage those stores better from our home in New York,” said Rag & Bone managing partner David Neville, adding, “L.A. is a natural next step for us. It is a huge market, and I actually love California. I think because I’m English I dream of living in the sunshine.”

Tricky as the retail real estate landscape is in Southern California, settling on a store location wasn’t easy. Neville decided Robertson Boulevard wasn’t appropriate for the brand, and he thought Melrose Place was sadly deserted, albeit pretty. He remembered the bustling coffee and tea joint Urth Caffe, just down the street from the Rag & Bone store on Melrose, from an early visit to Los Angeles and was drawn to the activity it generated, although, in true Angeleno fashion, it was parking that sealed the deal.

“I had somewhat of an epiphany sitting in a hotel with the manager of the L.A. store, who said the equivalent of foot traffic in L.A. was private parking or valet,” said Neville. “A switch went off in my head because I had looked at this freestanding property adjacent to the Urth Caffe with 11 private parking places in the back so people can come, park their car and take their time.”

Unlike at its East Coast locations, often housed in old buildings, Rag & Bone was able to strip the structure in West Hollywood down to its bones before redoing it to the brand’s liking. The resulting store has elements familiar from Rag & Bone retail elsewhere — English flowers such as roses and lavender arranged in a not-too-precise manner; the juxtaposition of modern and antique furnishings; recurrent use of the materials brass, brick, steel and glass, and abundant seating to foster a homey atmosphere — but turns the sometimes furtive design theme of exposure up a notch with an atrium at the front where shoppers can peer up at the showroom above, unfinished wood ceilings, a glass exterior and unconcealed air conditioning.

The merchandise, about 70 percent of which is women’s, is presented by color story and to correspond to outfits from Rag & Bone’s runway presentations. Unique to West Hollywood, where casual clothes are an everyday and everywhere wardrobe, are sections dedicated to men’s and women’s jeans in the store. The store also features the debut of an accessories destination area. Rag & Bone entered the handbag category for fall with the semi-structured Pilot satchel, which is displayed along with other signature items, notably core denim styles and the Newbury boot, at the main entrance.

Retail is expected to constitute 25 percent of Rag & Bone’s business this year, but Neville would prefer that figure rise to 50 percent as the brand expands with more locations. Currently, Rag & Bone has six New York stores, and stores in Boston, Washington, D.C., Tokyo and London. An in-store shop opened last month at the Gallery Luxury Hall West in Seoul.

Although Rag & Bone will add stores abroad, Neville said its main focus for retail growth at the moment is the U.S. “Once this store opens in L.A., we could open [another] in California pretty quickly that has more of a jeans focus. We are looking at some of the bigger U.S. markets like Chicago and San Francisco. I wouldn’t mind spending more time in Miami during the winter,” said Neville. “We are continuing to evaluate the opportunities that arise.”