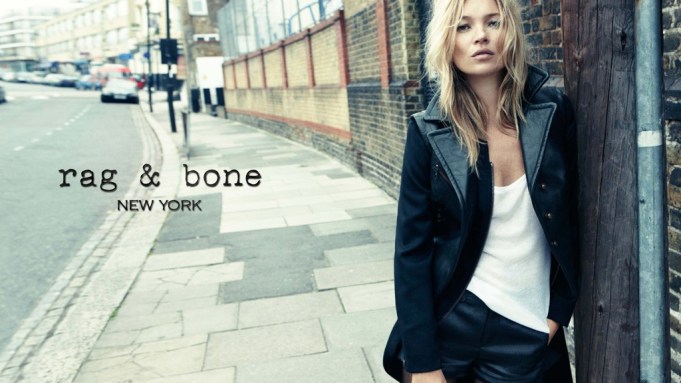 LONDON — Rag & Bone has unfurled its Union Jack and is ready to get its London party started.

Although the brand was founded in New York, and its rustic-edged interiors and furniture are made in-house in Brooklyn, the company is in the mood to celebrate its British roots.

The brand’s two managing partners — David Neville and Marcus Wainwright, who are both from London — plan to cut the ribbon Wednesday on their first European store, at 13-14 Sloane Square, on the corner of Sloane Street in London’s Chelsea.

The brand is also set to unveil its first ad campaign, which features Kate Moss and was shot in Kentish Town, north London, by Craig McDean.

“We’d been looking for a store in London for quite a long time. We both grew up here, and the opportunity finally presented itself in the form of an old stone bank,” said Neville.

Wainwright added that it was the right time to cross the Atlantic: “At first we needed to focus on New York, and in the meantime we opened up wholesale distribution in London. Now we need to do the international business justice, and it feels like the right time to come home.”

He added that the two have aspirations to open a store in Paris. Meanwhile, they are planning to open a 1,000-square-foot freestanding store in Seoul in September, adding to the existing unit the company has in Japan. In the U.S., Rag & Bone currently has six New York stores, and stores in Boston and Washington, D.C.

Clothing racks and displays are fashioned from old brass pipes, cabinets are made from raw steel, and wooden tables have black slate tops. There are midcentury modern touches in the form of glass bubblelike light fixtures and square “Mad Men”-ish sofas and ottomans.

A staircase fashioned from wood and forged iron from an old railway platform leads to the lower ground floor, where women’s denim and footwear are on display. There is heated flooring so that when women take off their shoes to try on jeans or footwear, they can walk without catching a chill. It’s London after all.

The store is filled with boxes of lavender, vases of wildflowers and has a Wild West-meets-Glastonbury Festival feel.

As for whether the moment is right to be opening a store in London, where a mood of austerity permeates, and where consumers are increasingly careful about their spending, Neville said: “We’re lucky. We’re not a giant brand. We’re a small, nimble brand in a growth phase, so the environment affects us less than it would an established business. We don’t see it as something to stop us from pushing forward.”

Wainwright added: “We’ve seen 100 percent growth year-on-year for the past six years, so we are not desperate for growth. It’s about quality, not quantity.”

The ad campaign, shot in both color and black and white, has a gritty feel, with Moss decked in a dark coat with leather lapels, HotPants and fishnet stockings.

The concept, the partners said, was to create stripped-back images featuring Moss caught in a moment.

“It wasn’t in a studio; it was just them on a derelict London street — Kate with minimal makeup, and Craig with a handheld camera and natural light,” said Wainwright, adding that the images reflect the brand’s ethos of “keeping things real.”

Neville added: “Although we are essentially a New York brand, our English roots have always influenced our aesthetic, and casting Kate was another nod to our heritage.”

The campaign, which was art directed by Laird+Partners, will break in the September issues of titles including international editions of Vogue, Vanity Fair, AnOther, Self Service, The Gentlewoman and The Paris Review.